Horseshoe Café a labour of love for best friends 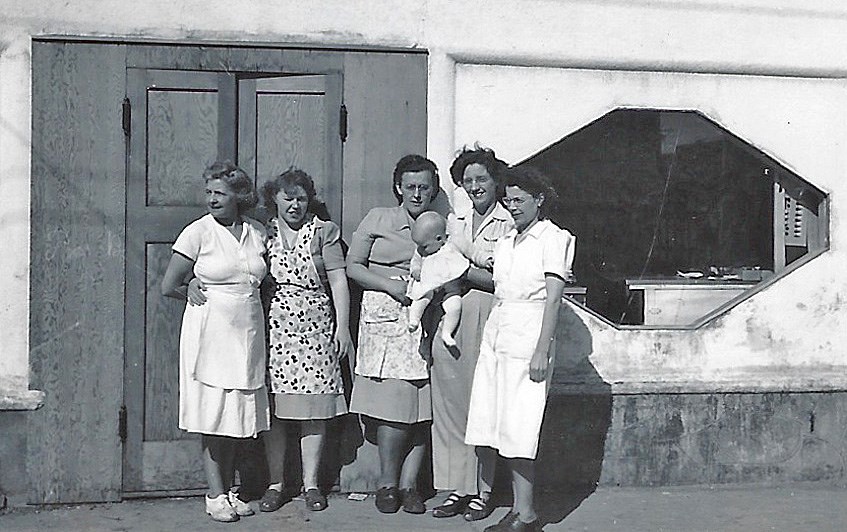 Horseshoe Cafe owners Nonie Garthwaite, with daughter Heather, and Nellie Kinghorn with their staff. The friends operated this Black Diamond restaurant, now Bohemia, from 1946 to 1953.

Naomi (Nonie) Garthwaite (nee Hanna) and Nellie Kinghorn (nee Wyshensky) moved to Black Diamond in 1946 where they owned and operated the Horseshoe Café on 112 Centre Avenue, supplying meals and bagged lunches to workers in the Turner Valley oilfield.

The building that housed the Horseshoe Café was transported from Little Chicago, also known as Royalites, a neighbouring settlement established for oil workers and their families, in the early 1940s to supply the demand for commercial property.

Heather Beach, who spent her first years in Black Diamond after being born in the Turner Valley Hospital in 1949, recalls days spent biking around the block.

“My world revolved on the block around the restaurant, pushing my baby stroller, riding my bike,” she said. “Everyone knew everyone and ensured I was safe on my sojourns. I have such good memories of growing up in Black Diamond those few short years.”

Beach’s family lived in the back of the café while her mother, Garthwaite, operated it from 1946 to 1953.

“There’s pictures of me sitting in the high chair at the counter,” said Beach. “They didn’t have a babysitter for me while they were working.”

Kinghorn took the morning shift, baking at least two dozens pies from scratch starting at 3 a.m., and Garthwaite took the afternoon and evening shifts, working as late as 11 p.m.

“It was tough on them,” said Beach. “I’ve heard stories of mom standing at the end of a shift rocking the crib, trying to get me to sleep and herself falling asleep standing and falling into the crib.”

The two women, both Saskatchewan farm girls, had enlisted in the air force and were stationed in Guelph, Ont. when they met, working in the kitchen and cooking meals for the military.

Beach said they became fast friends and agreed to open a restaurant together after the war.

Garthwaite initially moved to Calgary where she worked in the kitchen at the Baker Memorial Tuberculosis Sanatorium, where she met and later married head chef Thomas (Scotty) Garthwaite, before moving to Black Diamond.

It was while operating the café that both women married – Kinghorn marrying oilfield worker, Jimmy Kinghorn, who died from cancer six months later.

Life was not easy as the women ran the café, recalls Beach.

“A child, not aware of how tough things were, I at no time ever realized we were struggling,” she said. “In 1953 they decided they had enough. They sold the restaurant.”

While the women hoped the sale would give them a fresh start in Calgary, the potential buyers faltered on their finances, said Beach.

“We moved to Bowness and we struggled for years because we didn’t have that income from the restaurant,” said Beach. “I believe they made the decision to let the restaurant go rather than return and try selling again.”

The closure of the café came with great sadness. A going away party was held for the two women, complete with gifts.

Among them were a large swan etched mirror, that Beach owns today, a hand-tooled purse Kinghorn used the next 50 years and a white silk ribbon with the names of everyone who contributed gifts – Beach estimates more than 100 - carefully sewn on it.

“That suggests to me the community spirit was always alive and healthy in Black Diamond,” said Beach.

The café was converted to the Black and White Grocery Store, owned and operated by Fred and Anne Belliveau, before they sold it to Harold and Mary Ardley, who operated the store from 1952 to 1958. Aubrey Miller opened Miller’s Grocery, which he operated until 1978.

The building also served as an HVAC shop and Cal-Ren-Ind before it was taken over by the Foothills School Division where it served as the alternative school, Education Plus, from the late 1990s until 2015.

The historic building now houses Bohemia, which sells eclectic products from around the world.