Helmeted bikers are getting a sweet deal

Diamond Valley enforcement officers have a sweet deal for cyclists donning helmets this summer.
0
Aug 20, 2014 12:00 AM By: Tammy Rollie 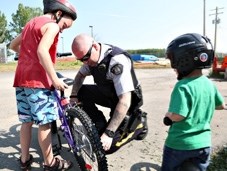 Turner Valley RCMP Const. Ken Moore fixes a chain on Jeffrey Wiens bike as his brother Kyler looks on. The two received a &#8216;ticket&#8217; for a free Freezie for wearing their helmets.

Instead of fining anyone not following provincial legislation that requires cyclists under 18 years of age to wear a helmet, Turner Valley RCMP and protective services officers in both towns have been rewarding people wearing helmets with coupons for Freezies and ice cream cones.

Black Diamond peace officer Vicky Bolton came up with the idea several weeks ago, which was met with a positive response by the Town and Turner Valley RCMP Sgt. Paulina Larrey-King.

“We’ve been talking about how we’ve seen a few kids not wearing helmets,” Bolton said of herself and fellow peace officer Jim Barry. “Bike safety has always been a big thing of mine and it’s good for the kids to be rewarded for good behaviour.”

Bolton used to teach cycling proficiency with her father, a paramedic, when she was a police officer in England and saw some horrific accidents involving cyclists not wearing helmets.

“It’s not very pretty,” she said. “You hit your head the wrong way and it could be permanent damage for life. It can have very serious consequences.”

She is now involved with the C. Ian McLaren Elementary School’s bike rodeo that teaches youngsters bicycle safety at the end of each school year.

In the first week of what Bolton calls the second phase of the bicycle education program, Black Diamond peace officers issued 35 coupons for a $1 ice cream at Grillo’s Pizzeria and spoke with four youth not wearing helmets. Turner Valley residents seen wearing helmets are being rewarded with a coupon for a free large Freezie to be redeemed at the Dr. Lander Memorial Swimming Pool.

“The kids love it,” said Bolton. “The word is getting around already.”

Though Bolton is not seeing a high number of young cyclists without helmets, she said it’s important to get residents educated about bicycle safety.

“We want to keep the kids safe,” she said. “It’s making sure people are educated about the safety and the legislation as well. Not everyone knows it’s law.”

According to Barry, in most cases it’s older youth not wearing helmets.

“Some of the parents think (their children) have been riding their bike for 10 years and haven’t fallen off yet,” he said. “All it takes is some little crash and you could hurt yourself seriously for the rest of your lives.”

Barry even sees youth cycling while on their cell phones and hopes this program will get them thinking seriously about the importance of cycling safely.

“I think it is getting around,” he said. “Sometimes all it takes is word of mouth and a reward.”

Young cyclists aren’t the only ones being rewarded for good behavior. Although the provincial legislation does not apply to adults, boarders and scooter riders, law enforcement officers are making sure to reward those wearing helmets as well.

In Turner Valley, Larrey-King said the program is strengthening the relationship between the RCMP and public.

“We are not stopping them to say they are in trouble, it’s a different conversation,” she said. “It’s a more positive interaction.”

She said residents aren’t often rewarded for good behaviour, and this program is a great way to spread the word about being safe.

“At the end of the day all of us in emergency services see the value of injury prevention and compliance with the use of helmets, which are the law,” she said.

Larrey-King estimates five per cent of young cyclists don’t wear helmets — a number that concerns her.

“To me any percentage is high because of the likelihood of a head injury is very high,” she said. “To me just seeing one injury is too many.”

The next stage of the bicycle safety program is giving helmets to cyclists who can’t afford them starting in September. The helmets are purchased by money raised at the Turner Valley RCMP Golf Tournament and donated by the Foothills Lions Club.

The bicycle safety reward program is expected to take place throughout August and may extend into the first week of school.