Plans to redevelop a campground severely damaged in last year’s flood will take place over the next few weeks.
0
Jul 23, 2014 12:00 AM By: Tammy Rollie 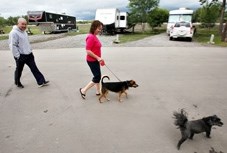 A woman walks her dog while camping in the Bob Lochhead Memorial Park in Black Diamond last week. A committee was formed to come up with a design for the northern part of the campground after the grounds were destroyed in the 2013 flood.

Plans to redevelop a campground severely damaged in last year’s flood will take place over the next few weeks.

The Town of Black Diamond is establishing a seven-member committee to come up with a design for the north end of the Bob Lochhead Memorial Park, formerly called the Centennial Park Lions Club Campground, in Black Diamond.

The committee will consist of members of council, the Foothills Lions Club and emergency services.

“It’s a great idea,” said Black Diamond mayor Sharlene Brown. “Everything can be worked on in a way that’s going to be compatible with all the stakeholders.”

Brown said in addition to re-establishing camping sites at the north end of the campground and enhancing the area, storm water outfalls need to be incorporated to protect the land in the event of a future high water event.

The campground was damaged when the Sheep River washed away land, filled sites with water and carried away buildings, signs, picnic tables and fire pits in the 2013 flood.

The Foothills Lions Club re-established 27 of its 68 full service sites and a large tenting area last fall at the south side of the grounds and opened it to the public for a few weeks at the end of the season last year.

It was originally thought the campground would remain closed this season because of nearby construction to create a dyke as part of river mitigation work to protect the town from potential flooding. With construction completed in June, the campground opened to the public on July 1.

James Lee, chairman of the reconstruction committee with the Foothills Lions Club, said the campground has remained busy so far this month.

“We’ve got about five or six of our seasonal campers back. The rest have booked in other places. Some indicated they will be back next year.”

Lee, a member of the new committee, said the Town worked hard to inform the government about the importance of the campground to the community.

The result was the Province approving the project for Disaster Recovery Program funding.

“When they gave the Town $50,000 to promote tourism the Town had a conversation about how important the campground was to the business community and the community at large,” Lee said.

“They proceeded to talk to the Minister of Environment and it was determined it would be covered under the DRP to put it back to the way it was.”

Lee said the Foothills Lions Club already spent $10,000 on a trailer to serve as the office and another $1,000 on a shed to store equipment this year, which he hopes will be covered by insurance.

“We’ve done a number of little projects down there,” he said. “It’s all out of the Lions pocket to this point.”

Lee hopes work on the north end of the campground will be complete for the 2015 camping season.

Having the campground open for much of this season will mean some money left over for community services and organizations this year, said Lee.

“I don’t know if we will be up to our traditional levels, but I’m hopeful we will be close and hopeful that we will be there for the following year for sure,” he said.

Lee expects the grounds will have 50 or 52 sites when remediation work at the north end of the campground is complete.