Funding in place for spray park

Youngsters could be splashing in Turner Valley’s spray park as early as September now that funding is in place to begin construction.
0
Jun 25, 2014 12:00 AM By: Tammy Rollie 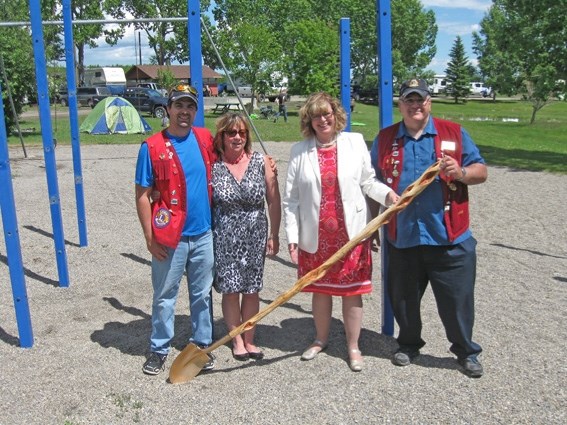 Youngsters could be splashing in Turner Valley’s spray park as early as September now that funding is in place to begin construction.

During its regular council meeting on June 16, Turner Valley Town Council voted to contribute $125,000 to the Foothills Lions Club Spray Park to cover the remaining costs to get the 31,200 square-foot spray park east of the Dr. Lander Memorial Swimming Pool in the ground this summer.

“It’s a great collaboration between a non-profit volunteer based agency and the Town to move ahead on the project,” said Barry Crane, Foothills Lions Club Family Spray Park Committee chairman and Town councillor. “It’s great for families and great for tourism.”

Council committed $125,000 from the Town’s recreation reserve fund toward the project in January in the event the club didn’t receive the $125,000 it applied for through the Province’s Community Facility Enhancement Program (CFEP) last fall.

The club learned in May it would receive $75,000 from CFEP and faced $60,000 in unexpected expenses - $30,000 for excavation that was originally going to be donated and $30,000 for an ultraviolet disinfectant system. The club requested $125,000 from the Town to complete the project.

With the money in place, Crane is excited at the prospect the spray park could be ready this summer.

“To actually say we are going to be done in two months doesn’t seem real, just because it’s been such a time-consuming effort for our committee and our club,” he said. “We are talking thousands of volunteer hours have been put into this project.”

With the Town under strict water restrictions since the Black Diamond water treatment plant was destroyed in the 2013 flood resulting in Turner Valley servicing both communities with water despite losing all but one water well, Tuck said the Town budgeted money to purchase water for the spray park, as it had the swimming pool, in the event the water restrictions are still in place when it opens.

“Our biggest concern in Turner Valley is the water restriction,” said Turner Valley Mayor Kelly Tuck. “Once those are lifted and gone and we can celebrate the active spray park I think it’s going to be tremendous for this area. I think everyone is excited, there is just caution behind it.”

The Foothills Lions Club has been raising money for the spray park for two years and donations continued to pour in at the club’s Turner Valley Discovery Days fundraising barbecue on June 7, said Crane.

Crane said people are getting eager to see the project complete.

“The pool is the big hang-out here for the summer, this just adds to it,” he said. “It’s so different from jumping into the pool or a lake. It’s water coming out of the ground and shooting up.”

Tuck said she is eager to bring her grandchildren to a spray park in her own community, saying it’s a great addition to the town’s recreation.

“Being able to put the funding to the spray park makes sense for all of us,” she said. “It’s just another asset to the town and it will complement the pool and the area.”

Excavation of the site will begin this month followed by installation of the equipment, washrooms and outdoor showers in July and August, said Crane. Town crews installed $240,000 worth of infrastructure to the park last spring, which will also be used for the downtown revitalization project, slated for construction in upcoming years, which will include a town square, businesses and an outdoor market.

“If we even just complete all the construction this year and we don’t even get to use it, it will still just be great for next year as soon as the pool opens and the sun is shining we can have the park operating and just start off next summer blazing,” Crane said.

Once construction of the spray park is complete it will be owned by the Town of Turner Valley.

For more information about the Foothills Lions Club Family Spray Park or to make a donation to the project contact Barry Crane at 403-933-5385.