A former Turner Valley councillor expects to settle nicely into his role as a Town employee after spending almost 10 years getting to know the operations and issues of his community.
0
May 21, 2014 12:00 AM By: Tammy Rollie 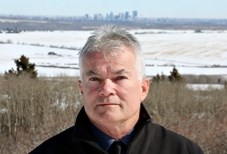 A former Turner Valley councillor expects to settle nicely into his role as a Town employee after spending almost 10 years getting to know the operations and issues of his community.

Barry Williamson resigned as councillor with the Town of Turner Valley on May 15 and began his duties as its chief administrative officer (CAO) on May 20, filling a position that has been vacant for about two months.

Former CAO Leslie Fitzgerald, an employee with the MD of Foothills, was hired to fill the position for the Town temporarily three years ago.

“I thought this might actually be a good fit,” said Williamson. “When I looked at what’s required for the job and my own experience I thought I could throw my hat in the ring for this.”

Williamson said stepping down as an elected official means he’s also stepping down as chairman of the Calgary Regional Partnership and member on various committees he joined as councillor, including the Intermunicipal Development Planning Committee and Turner Valley Oil and Gas Group.

Williamson said his experience on council and various boards helped him develop an understanding about municipal governance and regional leadership, which will assist him with his new role as CAO.

“I got involved in a lot of interesting issues in the overall business, governance duties, finance and audit duties,” he said. “The one thing I do know about this council and previous councils, I know what they are looking for in administration. I’ve led the charge in that as well. I will be looking at how well the whole business is run.”

Williamson holds a bachelor of political science degree and previously worked in the oil and gas industry.

Turner Valley Mayor Kelly Tuck said Williamson is a good fit for the position and is excited about the change.

“He really does come with a really good background,” she said. “His experience, commitment and wisdom were invaluable assets to the community and will be greatly missed in his role as councillor.”

Tuck said Williamson joins the Town staff at a good time as the major decisions for 2014 have been made now that the budget is complete and the projects are underway.

“The nice thing is we are not missing a beat because he knows the community so well and he knows the issues,” she said. “He has been around the organization. It just made sense to council.”

A byelection is expected to take place this summer to fill Williamson’s seat on council. The former councillor said he doesn’t expect finding a replacement will be difficult.

“There certainly has been an interest in the past to be on council,” he said. “Hopefully some good people will step up and get involved and not just for particular issues that bother them and think they are going to solve them by being on council. There is somebody out there who can do the job.”