Foothills businesses step up to support Boys and Girls Club

A youth-based club struggling to meet the financial demands that have come with operating during the COVID-19 pandemic is getting a little help from its friends.
Sep 11, 2020 11:15 AM By: Tammy Rollie 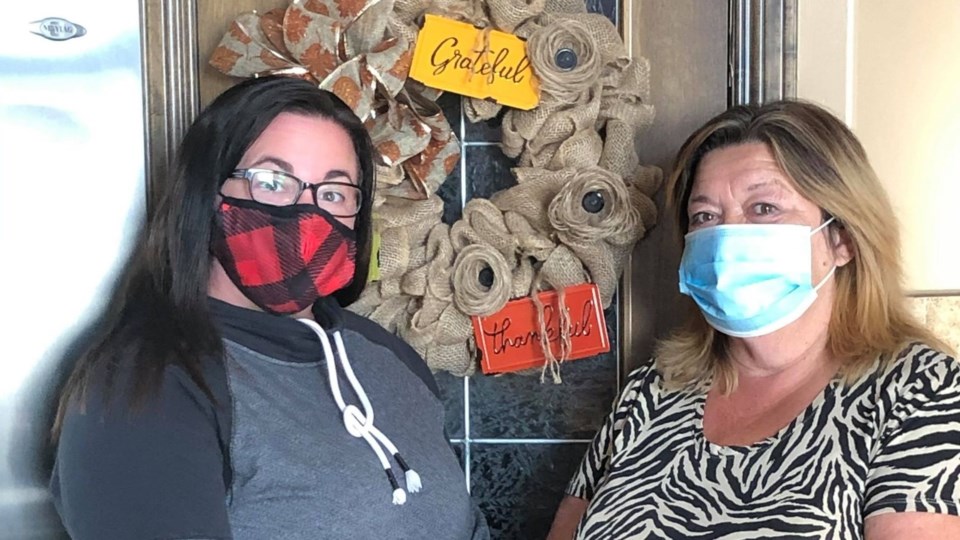 Kim Reichert, left, and Shirley Puttock, of the Boys and Girls Club of the Foothills, say they're grateful for the community support to keep the club operating. (Photo courtesy of Kelly Tuck)

A youth-based club struggling to meet the financial demands that have come with operating during the COVID-19 pandemic is getting a little help from its friends.

Hard Knox Brewery, Rona Black Diamond and The Canadian Brewhouse have stepped up to support the Boys and Girls Club of the Foothills as it faces higher costs and lower revenue due to strict cleaning regimes and limited enrolment in its before and after school programs in Black Diamond, High River, Nanton and the Crowsnest Pass, and the after school program in Eden Valley.

The owners of Rona Black Diamond selected the not-for-profit as their charity of choice for Rona’s corporate Canada Heroes campaign, which matches 50 per cent of donations made by its customers from Sept. 1-30.

“There are a number of people in the community and within our own organization who have found value from their programs,” he said. “We get lots of feedback that they’re extremely important to our community and a positive influence for children.”

Wagstaff said he hopes to see customers contribute as much as $4,000, which the Canada Heroes campaign can match with its $2,000 maximum.

“When Brent came to us and asked I said, ‘Yes, of course,’” said Lyken. “He wanted us to pick a local charity and I thought the Boys and Girls Club would benefit from it.”

Ritten said he came up with the idea after chopping several old and dead spruce trees on his parents’ Lacombe quarter section. He had hoped to increase his sales by selling the firewood at the brewery.

“Hard Knox wouldn’t take any proceeds so I thought I might as well donate what they might receive to charity and it might encourage people to purchase it as well,” he said.

The large bags of firewood sell for $14, with $6 going to the club.

Shirley Puttock, Foothills Boys and Girls Club chief executive officer, said money raised from both fundraisers will go directly to youth in the before and after school program.

“All of our local donations we like to go straight to the kids," she said. "We would like to buy some new toys because we have to keep rotating them."

With so many restrictions surrounding the COVID-19 virus, Puttock said it’s difficult for the club to host fundraisers and that it's in need of funds now more than ever.

The club is facing additional costs for its before-and-after school program this year after hiring extra staff to clean, take temperatures and fill out assessments at the door, as well as keep the youth in groups of no more than 30.

Puttock said every dollar counts and she appreciates those who are stepping up to help out.

“All businesses right now are struggling and they’re still thinking about helping us,” she said. “It’s overwhelming how generous the community has been in these times. It shows you what great communities we operate in and how generous Albertans are.”

Another fundraiser for the Boys and Girls Club of the Foothills is The Canadian Brewhouse's pub night on Oct. 24 to raise money for the club’s Field of Dreams ball diamond.

Volunteer co-ordinator Kim Reichert said it was the Boys and Girls Club that sought out The Canadian Brewhouse after learning about its pub night fundraising program.

“We thought what a wonderful way to raise some money for our organization,” she said. “We’re grateful for their support. It feels amazing to have the community back the Boys and Girls Club.”

The Canadian Brewhouse general manager Sunny Johal said it will be the first of what he hopes to be several charity pub nights for the Okotoks establishment.

The brewhouse covers the cost of printing the tickets so the charity can collect 100 per cent of the ticket funds, said Johal. Each ticket comes with a free drink and Johal is encouraging charities to host silent auctions and sell 50/50 tickets for the potential to raise as much as $10,000.

“It’s our biggest effort to support the community,” he said. “Our company is built on supporting the local community. Especially with COVID and everybody being off work and people losing their jobs and how tough the summer has been, I’ve made a really strong push this summer to talk to people who could benefit from this.”