Flood protection may be done in 2015

The Province’s recent commitment of $10 million for flood mitigation and recovery in Black Diamond may be the end of river-related work in the community.
0
Jan 28, 2015 12:00 AM By: Tammy Rollie 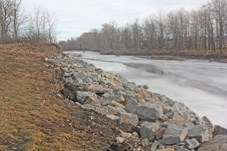 The construction of a berm is expected to begin in the Sheep River north of the Black Diamond Bridge in February. The Province recently approved $10 million in flood mitigation and recovery work in the community.

The Province’s recent commitment of $10 million for flood mitigation and recovery in Black Diamond may be the end of river-related work in the community.

Flood Recovery Erosion Control and Disaster Recovery Program funds were approved for the town’s final projects - repairing a water outfall damaged in the 2013 flood, constructing berms to protect homes, businesses and a water well, and rebuilding a campground.

“We’re protecting the community and getting the stuff done,” said Mayor Sharlene Brown.

“Everyone is working on the time line they’re supposed to be working on and trying to make things work as fast as they can. I feel very happy about that.”

A portion of the outfall was washed away in the 2013 flood and the manual valve to prevent water from entering the town didn’t work well, she said.

She said the manual valves for the Fifth Street and Second Avenue outfalls will be replaced with automatic backflow preventers.

Aebig said the Fifth Street outflow system will be shifted slightly, as a portion of the campground where it was previously located was washed away in the 2013 flood.

She said it will connect to an existing culvert under the Black Diamond Bridge, allowing the water to be released into the Sheep River north of Highway 22.

The project should be complete before May.

Work is also set to begin on a permanent berm downstream of the Black Diamond Bridge in a couple of weeks.

Aebig said a temporary berm was built prior to fish spawning season last fall to redirect the water and allow construction of the permanent berm while the Town awaited funding approval.

The berm will protect businesses and homes affected by the 2013 flood, she said.

The Province allotted $5.4 million to the project for construction, precautionary work, engineering, environmental work and compensation for any lost fish habitat by creating a similar habitat in another part of the river, she said.

Aebig had hoped work on the permanent berm would have started last August to prevent impacting spawning fish in the river, but because they hadn’t yet received funding approval from the Province, the temporary berm was constructed instead.

Aebig said the project needs to be complete before the spring to prevent potential flood damage during high water levels.

She said fish habitat will be protected upstream of the Black Diamond Bridge with the construction of a berm to protect the town’s No. 3 water well, the only one to survive the 2013 flood, this fall. The well is located upstream of the town on the north side of the riverbank where the water treatment plant was located before it was washed out by the flood.

While the well was not damaged in the flood, Aebig is worried continuous erosion of the riverbank could pose a threat in the future. The Province allocated $2.3 million to the project.

“It is expected to be okay if a flood does occur,” she said. “It needs protection, but it’s not as much of a priority.”

Finally, $1 million has been dedicated to rebuild the Bob Lochhead Memorial Park. Several sites were lost, equipment washed away, landscaping eroded and buildings damaged in the 2013 flood.

The south portion of the campground was rebuilt last year with $42,000 in Disaster Recovery Program funding.

The additional $1 million awarded this year will allow for 22 more sites on the north end, the installation of underground services and replacing lost buildings and services. Work is expected to begin in the spring.