A public hearing, scheduled for Aug. 18, invites public input on proposed amendments to the land use bylaw pertaining to the parking of RVs and trailers.
Jul 9, 2021 8:45 AM By: Tammy Rollie 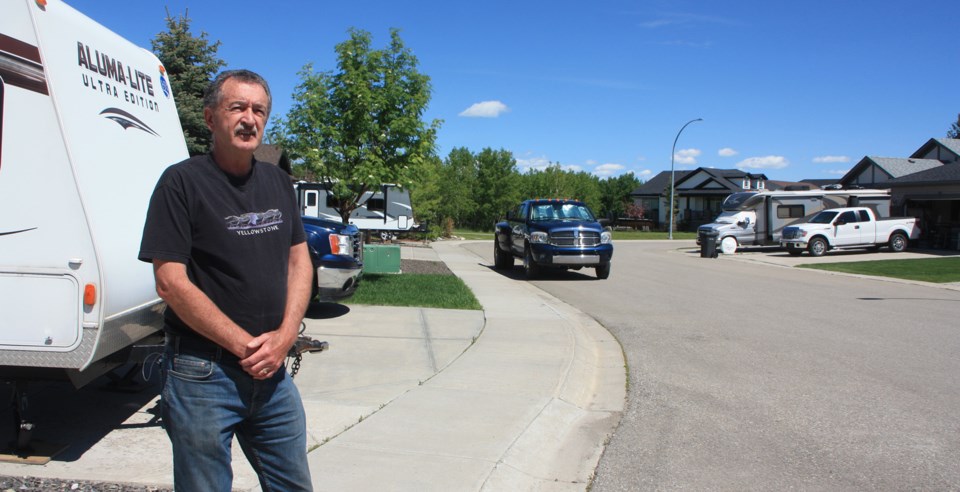 Black Diamond Town council passed first reading to proposed amendments to its land use bylaw concerning the parking of RVs and trailers a year after resident Glen Fagan brought his concerns to the Town. (Wheel File Photo)

Black Diamond residents have one final opportunity to weigh in on rules relating to parking recreational vehicles and trailers on private property next month.

At its July 8 regular meeting, Black Diamond Town council passed first reading to proposed amendments to its land use bylaw concerning the parking of RVs and trailers, and scheduled a public hearing for Aug. 18.

Last year, council directed administration to prepare amendments that allows up to two units to be parked on front driveways in all subdivisions from April 1 to Oct. 31, requires units be set back at least one metre from sidewalks or 1.5 metres from curbs where there’s no sidewalk, restricts the use of units as a residence, includes fines for violations and limits the maximum width of a driveway in a front yard to 9.15 metres feet in R-1, R-1A, R1-C and R-2 districts.

“Thirty feet is ample room to park three vehicles very comfortably,” Rod Ross, Town planning manager, told council. “Restricting the size of a driveway prevents someone from paving their entire front yard or just parking on a front yard. They’re required to park on a driveway and the driveway is limited to 30 feet in width. It ensures there’s a little bit of landscape area in a front yard.”

Coun. Brian Marconi expressed concerns around homeowners who’ve replaced grass with gravel in their front yards and are using the entire yard for parking.

“I don’t know if we’re addressing this issue in the revision,” he told Ross.

Ross replied that the Town currently doesn’t limit how wide a front driveway can be.

“We don’t have anything preventing someone from gravelling their entire front yard and parking vehicles on it, so anything that exists like that prior to the passing of this bylaw I think would have to be permitted to continue,” he said. “They could call it xeriscaping, which is landscaping with rocks and drought-tolerant plants. One man’s gravel driveway is another man’s xeriscaped front yard. We’re trying to address these sorts of situations.”

The proposed land use bylaw amendment states that RV and trailer units shall not be occupied for more than 15 days a year for no more than three consecutive days at a time and that a person may park two recreational units in a rear or side yard of a lot year-round.

The proposed changes come after Willow Ridge resident and former mayor Glen Fagan requested in June 2020 that council amend its land use bylaw to allow RVs in front driveways in the Willow Ridge and Riverwood subdivisions during the camping season, so long as they don’t extend over sidewalks, curbs or front lawns.

In an interview on July 9, Fagan said he’d been wondering if the Town had moved forward toward making amendments.

“It’s been a year,” he said. “I thought, did I actually miss something? Did they change the bylaw and not advise anybody? This is good to see. This is one of those ones that I know they had to probably do a fair bit of investigation with other towns of similar size.”

Black Diamond’s current land use bylaw permits residents to park RVs in their front driveways unless they live in areas zoned R1C, pertaining to the Willow Ridge and Riverwood subdivisions where the side yards are only four metres apart and pose a potential safety hazard when large vehicles are parked in driveways.

Peace officers had embarked on a one-day educational blitz in the subdivisions on May 29, 2020 in response to complaints of residents illegally parking their RVs in their front driveways, prompting Fagan to approach the Town with his concerns.

Fagan, who has no back lane, said he’d been parking his RV on his front-yard driveway seasonally for seven years and will attend the Aug. 18 public hearing.

“I’m hoping the bylaw will be applicable across the spectrum of the whole town,” he said. “That was one of my goals.”

Town administration posted an online survey last summer to collect public opinion on whether RV and trailer units should be allowed in front driveways.

When asked if RVs should be allowed to park in front yards, 58 per cent of the 332 people who took the survey selected yes, 26 per cent selected no, 19 per cent clicked on the option that it be allowed from May to October only, seven per cent felt it should apply to RVs shorter than 17 feet only and five per cent believed it should apply to parcels with more than 50 feet of street frontage.

The survey asked the same question for trailers, with a similar response.

Administration will present a comprehensive report of the proposed amendments at its Aug. 18 meeting.