Fines in place for water abusers

Turner Valley residents not adhering to the water restrictions could face some stiff penalties this summer.
0
Jul 2, 2014 12:00 AM By: Tammy Rollie 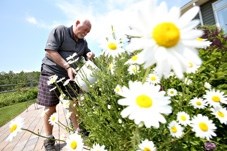 Turner Valley resident John Waring uses left over water from his shower to water the flowers in his yard. The Town implemented penalties in its water conservation bylaw to address residents not abiding by the water restrictions.

Turner Valley residents not adhering to the water restrictions could face some stiff penalties this summer.

On June 16, Turner Valley Town council incorporated penalties in its water conservation land use bylaw that will have residents paying as much as $1,500 for not complying with the water restrictions in response to a number of people seen violating the rules.

“I spent the weekend reminding people not to have water and sprinklers going,” said Turner Valley Mayor Kelly Tuck at a previous council meeting. “I was pretty much told where to go by one of them. They are not abiding, which is a concern.”

Water restrictions were put in place a year ago when Turner Valley began supplying water to Black Diamond after Black Diamond’s water treatment plant was damaged in the 2013 flood.

The town is at level three, the highest for water restrictions, which prohibits residents and merchants from all outdoor and non-essential water use.

Water use for Black Diamond and Turner Valley increased from 1,500 cubic metres a day in mid to late spring to 1,800, said Barry Williamson, chairman of the Quad Water Regional Project.

Although water use dropped an average of 25 per cent for both communities over the last year, Williamson said the raw water reservoir levels were at their lowest ever at 41 per cent capacity last week, which means the reservoir contained 41 days worth of water. He said there isn’t adequate water being supplied to the reservoir.

It is currently supplied by two wells.

In early June, water was taken from a pit near the Sheep River that the Town also resourced last fall, bringing the reservoir level up to 46 per cent in just three days, Williamson said.

Williamson said the pump was shut down on June 18 when the wall around the pit was compromised by the river’s rising water levels. As a result, the reservoir levels dropped 400 cubic metres daily, he said.

When the river levels began dropping, the pit was cleaned, tested and brought back into operation last week, he said.

Williamson said having penalties in place for those not adhering to the restrictions should help protect the towns’ water until the reservoir is back to full capacity.

Tuck said she does her part by using water in her rain barrels to wash her deck and floors, trucking in water to fill her hot tub, running the dishwasher once a week and washing her bedding less frequently.

“I’ve worked very hard to ensure that I have conserved water,” she said. “My water bill comes in and it’s at eight to 10 cubic metres in two months.”

She is not the only one cutting back significantly. Turner Valley resident John Waring said his family isn’t using their hot tub, collects water from their showers to water plants, flushes only when necessary and does the laundry less frequently.

Waring said he is glad to see the fees in place.

“The fact that there is a penalty involved might make people who are sitting on the fence more aware. It just brings it out a little bit more seriously.”

Black Diamond Town council, which passed first reading for the same fee structure, is hosting an open house to inform the public about the pending decision on the main floor of the municipal office July 10 at 6 p.m.

“We need to have this bylaw put in place, but we do need to inform the public on it,” said Turner Valley Mayor Sharlene Brown.

Information will also be presented on the current water situation and status of the Quad Regional Water Project, sharing of water resources between Black Diamond, Turner Valley, the MD of foothills and Longview that is in the works.