Exhibit gets in touch with reality

A Millarville area art gallery is taking a break from expressionism and getting real the next four weeks.
0
May 14, 2014 12:00 AM By: Tammy Rollie 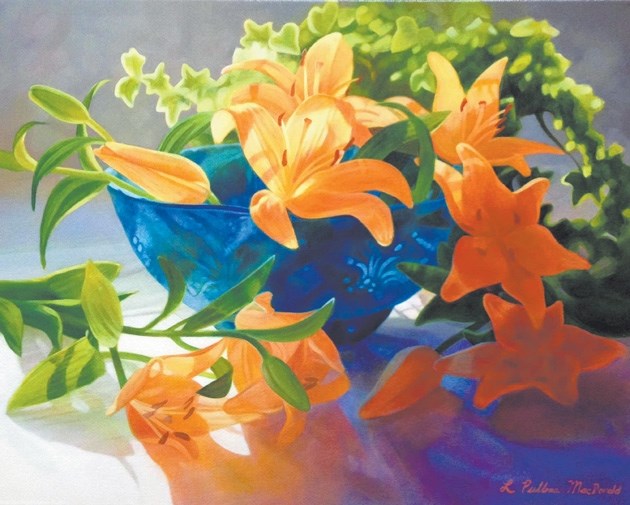 This piece by Lorri Pullman-MacDonald, an acrylic painter from Cochrane, will be among many displayed in the Leighton Art Centre&#8217;s The Reality Show May 17 to June 15. Albert artists Cheri Denis and Karen Dixon have also contributed pieces to the show.

A Millarville area art gallery is taking a break from expressionism and getting real the next four weeks.

The Leighton Art Centre is showcasing vibrant life-like pencil drawings and acrylic oil paintings created by Alberta artists Lorri Pullman-MacDonald, Cheri Denis and Karen Dixon in an exhibit it calls The Reality Show from May 17 to June 15.

Although the three artists never exhibited in the same show before, the similarities in their work prompted Leighton Art Centre curator Stephanie Doll to combine their pieces into one captivating exhibit.

“They are all very detailed,” she said last week. “They focus on light and shadows and building up transparent glazes. They are very crisp.”

As Doll was going through the numerous submissions from Alberta artists last year, she said the work of the three women stood out.

“They all wanted their own solo show, but we realized they had a similarity between the three of them and they would make a better show together,” she said. “Even though the subject matter isn’t the same, the details and paintings are very similar.”

Putting pieces from the three artists in one show also provided an opportunity to change things up at the Leighton Art Centre, said Doll.

“We have a lot of impressionist type work, but this realist work we don’t usually have,” she said. “They are a nice change. It’s a gorgeous addition to the house.”

Doll said still-life pieces are rarely captivating to art viewers, yet Pullman-MacDonald, Denis and Dixon capture the simplest items and make them fascinating.

“A picture of a plate with some spoons doesn’t seem interesting, but the painting is so well done it makes the image gorgeous,” she said. “The show is a really great example of how artists can use detail, attention to light and shadows and composition to turn something that is really mundane into an image that’s really beautiful.”

Doll said part of the Leighton Art Centre staff’s mandate is to feature artists who have been members of the centre for a long time, and the profile fit for all three artists.

Pullman-MacDonald, an acrylic painter from Cochrane, has had her work displayed at the Leighton Art Centre off and on for more than a decade, but not recently.

In fact, it was Pullman-MacDonald’s still-life paintings at a previous Clothesline Festival and Art Sale that captured Doll’s attention. The artist said Doll commented on them when asking her to be a part of the three-woman exhibit.

“I’m really honoured that they asked me to be in this show,” she said. “I haven’t had work there in a while. Stephanie asked for florals and still-lifes and a couple of landscapes.”

Pullman-MacDonald paints a variety of subjects, but noticed a trend lately towards expressionism and impressionist the last few years.

She admits this genre is not her forte, and was relieved to be asked to paint something different from the mainstream.

“I thought this is really nice that someone has recognized that realistic art is still interesting so I was really pleased when she put this show together,” she said of Doll. “Art trends come in waves.”

Pullman-MacDonald had been working on a series of landscapes when she received Doll’s call, and hadn’t painted still-life images in years so she had some work to do.

As the pieces came together, Pullman-MacDonald focused on a common trend — capturing light in unique ways in almost every piece.

For instance, of Pullman-MacDonald’s three landscapes, two make use of water reflection. Viewers will notice her still-life paintings also make use of light whether it’s reflecting through a crystal vase, on tinfoil or shining through a bowl onto a tablecloth.

“Just about everything I’m giving them has something to do with light being reflected,” she said.

Pullman-MacDonald said she tackled her projects for The Reality Show without familiarizing herself with the work of Dixon or Denis, neither of whom she’s met or whose work she has seen before.

“I just wanted to do my own things and concentrate on producing my own best works,” she said. “I didn’t want to be influenced by them.”

The Cochrane resident has painted most of her life, and more seriously the last 20 years. Pullman-MacDonald not only submits her paintings to art galleries across the province, but also teaches art classes and workshops through various venues. She is hosting a workshop at the Leighton Art Centre on June 14 and 15.

The opening reception for The Reality Show takes place on May 17 from 2 p.m. to 4 p.m. where the artists will explain their work. Refreshments and snacks will be available.