Enrollment up at high country schools

Enrollment at two foothills schools is surging as Turner Valley and Longview Schools saw increases in student populations the first two weeks of school.
0
Sep 17, 2014 12:00 AM By: Tammy Rollie 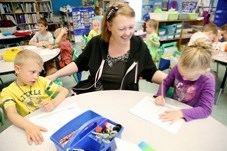 Turner Valley School principal James Holladay said the school has 23 more students this year than last, putting the kindergarten to Grade 6 school enrollment at 195. The increase is more than it’s used to seeing this time of year.

“Every year it’s been an increase of four or five kids, but this year has been a big jump,” he said. “We have them register in May and June, but then there was a bunch register over the summer, which was nice to see. It’s great to have a growing community and a growing school.”

As a result of the enrollment boost, the school added a kindergarten and Grade 3/4 split class, requiring an additional two staff members.

Holladay attributes the increase to more young families moving into the community.

He said he recently spoke to a parent with a child in Grade 6 who said the school had an enrollment of 120 students when her child started kindergarten.

Despite the growth, Holladay said the school continues to boast low class sizes of 19 to 22 students.

Graham said the increase is due to more young families moving into the community, but it didn’t result in requiring additional staff. For the first time in her 31 years at the school the staff didn’t change from last year, she said.

Oilfields High School principal Scott Carey said enrollment at the Black Diamond school is about the same as recent years at 350 Grades 7 to 12 students. Enrollment held steady at 350 to 360 the last few years.

At C. Ian McLaren School in Black Diamond, principal Sherry Agafoster-Jones said enrollment is slightly over 200 students, which is about where it was last year.

“It had been projected that we might gain a few more,” she said. “We had an anomaly last year with kindergarten students. We had quite the jump, then things settled down.”

Agafoster-Jones said class sizes are at 25 to 30 students in the upper elementary and around 20 in the lower grades.

Millarville Community School principal Glenn Gibson said the kindergarten to Grade 8 school has a few less students than last year, at 183, and that enrollment historically fluctuates slightly each year.