TELUS is providing residents and first responders in the community with wireless cellular phone connectivity until the outbreak is contained.
May 12, 2020 12:00 PM By: Tammy Rollie 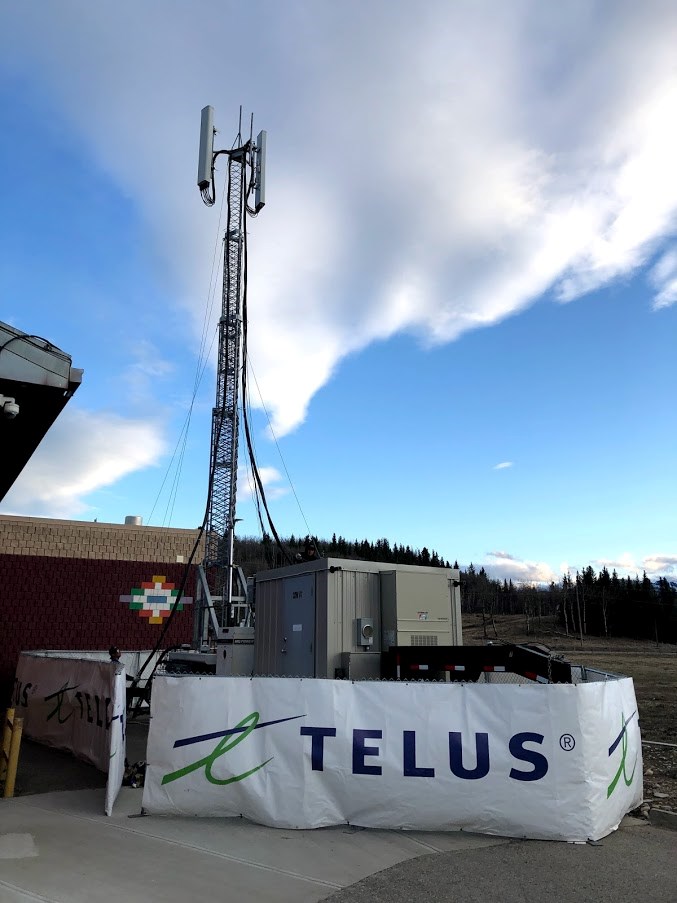 TELUS installed its Cell on Wheels (COW) at Jacob Bearspaw Memorial School in Eden Valley on May 1. (Photo courtesy of TELUS)

A vital service many take for granted is now available to a First Nations community, offering a sense of safety and security for its approximately 800 residents.

In response to the COVID-19 outbreak in Eden Valley last month, the Province reached out to TELUS on April 27 asking that it deploy its Cell on Wheels (COW) to provide residents and first responders with wireless cellular phone connectivity. Four days later, the mobile wireless trailer was positioned near Chief Jacob Bearspaw Memorial School, which is serving as a recovery centre for those diagnosed with COVID-19.

“It was a really good collaborative effort and so important because cell service was very, very minimal,” Shade said. “Some community members would drive halfway to Longview to access cell service if they needed to make calls or business calls. There were probably some homes higher up, elevation-wise, that did get cell service, but that would depend on where they live.”

As former principal at Chief Jacob Bearspaw for 12 years, Shade was well aware of the poor cell service.

“Students found a hot spot by one of the outside lights where they were able to get minimal signals, but other than there was little to no service,” he said.

Doug Self, TELUS public relations communications manager, said the COW will remain in place until the outbreak in Eden Valley is contained and increased coverage is no longer required. The cost of providing the service will be covered by TELUS, he said, adding it’s the only COW that’s been deployed in Alberta in response to the pandemic.

“It’s currently providing coverage to the reserve, including the AHS clinic and the school, which is where the COVID-19 positive patients are being transferred for care,” he said. “Anybody with a reasonable range of the COW would be able to connect to the service.”

Self said the mobile wireless trailers have provided enhanced wireless service for large events like the Olympics, emergency situations and natural disasters in rural locations where more expanded capacity is required.

“It was a pretty quick turnaround,” he said of deploying the COW in Eden Valley. “Four days is an extraordinary condensed amount of time to get these things deployed.”

“There’s a real sense of pride because we’re now into the century other people are in,” he said. “It was awful. There was no cell service, so when I would get close to Longview I would hear my phone ‘bing, bing, bing’ and all of a sudden everything is picking up.”

For Hopeton, the added service affects how responsive he is to people trying to reach him through his cellphone.

“Previously, when I got home I had to respond to all of these messages and calls that I missed whereas now I can get them and respond to them immediately,” he said. “It’s made it much easier and more pleasant to feel like I’m being responsive.”

Rather than Eden Valley residents having to search for hot spots or leave the community to use their phones, they can now access cellular service almost anywhere in the community, Louden said.

“We’re just so grateful to the Province and TELUS and our chief and council who were able to advocate and get this done so timely,” he said.