Keith Lefthand is hoping a GoFundMe account, set up by a friend, will help him to reclaim traditional family regalia in time for the Calgary Stampede. The regalia was used as collateral for a loan to help him pay his bills after he and his wife were laid off.
Jul 6, 2021 7:45 AM By: Tammy Rollie 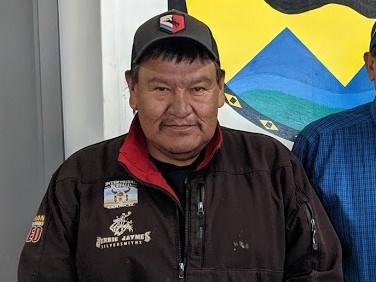 Keith Lefthand is hoping to reclaim traditional family regalia he used as collateral for a loan to pay his bills while unemployed during the peak of COVID-19. (Photo courtesy of Jeff Nelson)

An Eden Valley elder is hoping the kindness of strangers will help him to reclaim traditional family regalia.

About a year after being laid off from his job as a cultural liaison at Eden Valley's Stoney Trail Wellness Centre due to the COVID-19 pandemic, Keith Lefthand made the difficult decision to put family heirlooms up as collateral to qualify for a loan so he could pay his bills.

The regalia included a traditional men’s buckskin outfit worn by his father, the late Chief Johnny Lefthand Sr., beaded dresses, an elk hide ceremonial drum, tools and a rawhide bag, among many other items.

“I have a chance of getting it all back, but the people who have it want a little bit more for me to get it back, which is understandable,” said Lefthand. “I’m slowly buying some things back with my paycheque, but I’m not going to have enough money to get all of it back.”

Lefthand, who returned to the wellness centre about a year after being laid off, said the regalia is spread out among various individuals and companies, but he's hopeful he can get it all back.

“They will sell it to whoever wants to buy it, but it’s expensive,” he said. “Right now people don’t want to spend extra money to buy regalia.”

Time is running out.

The former Bearspaw First Nation council member of 16 years wants to display the regalia in his family’s tipi during this month's Calgary Stampede, which has been a decades-long tradition in his family.

Johnny Lefthand, a professional cowboy who was inducted into the Stampede’s Pro Rodeo Hall of Fame and served as a parade marshal in 1977 with chiefs of Treaty 7 First Nations, had proudly displayed his history and regalia in the Stampede's Elbow River Camp for decades.

Lefthand said the regalia he hopes to reclaim represents about 40 per cent of his historic family heirlooms, and he hopes to have most of it on display in time for the Stampede’s opening day on July 9.

“My family, we all take part,” he said, referring to the Calgary Stampede. “My oldest daughter and her husband, they both participate. They’re dancers. My youngest son has been a wrangler for the parade ever since he was 16. My oldest son in B.C., his wife is a dancer and my grandson, he also dances. He’s seven years old. We start them young. We start them when they start to walk.”

The Lefthands will showcase their traditions at Elbow River Camp during the first five days of the Stampede.

“This year there will be 20, 21 tipis,” he said. “Half of the village families will participate the first five days and do our thing and the second half will come in and do the last five days.”

Lefthand and his wife, Jamie, have five grown children and are raising three of their nine grandchildren in their Eden Valley home. Jamie, who worked as a certified cook at a school in the Tsuut’ina Nation west of Calgary, was also laid off more than a year ago and hopes to return this fall.

“There’s no job available where we live,” said Lefthand, adding he did odd jobs where he could. “I worked for a rancher, but he had to reduce his staff as well so I did some work for him – two days here and there – to pay for groceries.”

The Lefthands need about $10,000 to reclaim their regalia, but they aren’t looking for a handout.

For those who contribute $200 or more, the Lefthands are offering a cultural experience on their Eden Valley property including horseback riding, an overnight stay in a tipi, an evening campfire with home-cooked food, a smudging ceremony, a sweat lodge experience and the telling of family stories and traditions.

A GoFundMe account, set up by friend Jeff Nelson, has raised more than $1,000 for the family in the first day. Just under $9,000 more is needed in the next four days.

“I deeply appreciate those who help us out,” said Lefthand.

To learn more or to make a donation visit https://www.gofundme.com/f/help-keith-lefthand-recover-historical-artifacts