Turner Valley Town council recently approved third and final reading to amendments in the municipality's land use bylaw that administration and council spent the past several months tweaking.
Jun 11, 2021 8:00 AM By: Tammy Rollie 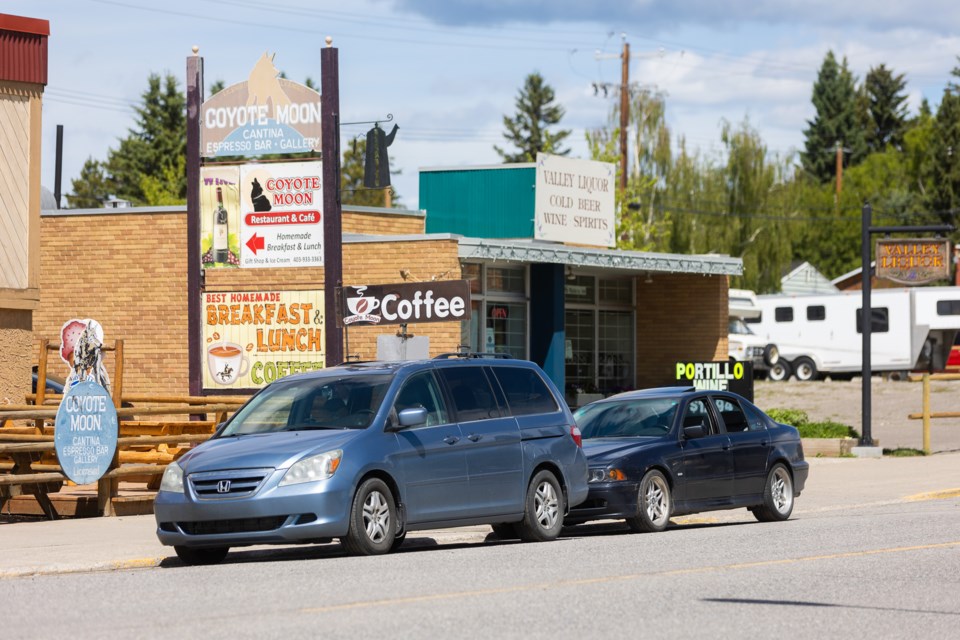 The Town of Turner Valley has changed its parking bylaw removing the requirement for businesses to have on-site parking.Brent Calver/OkotoksTODAY

Doing business with the Town of Turner Valley should be simpler now that the municipality’s land use bylaw has been amended.

At its May 17 council meeting, Turner Valley Town council approved third and final reading to amendments administration and council spent the past several months tweaking in the 150-page land use bylaw document.

Deputy Mayor Jonathan Gordon said the revised document has eliminated a lot of red tape and is easier for businesses, landowners and developers to understand.

“The focus was to do as much removal of red tape in an amendment as we could,” said Gordon. “If a developer or builder is interested, they can look at this as a ‘Yes, if’ document rather than ‘No, because.’ It’s a very progressive document.”

Gordon said he’s been advocating for changes to the bylaw since the start of his term on council almost four years ago.

“Back in 2017, one of the pillars of my election campaign was economic development and how to encourage growth,” he said.

Among the key changes is the elimination of required off-street parking on commercial development in the central business district. Before the amendment, the bylaw required businesses to have parking stalls.

Instead, Gordon said customers can park on the street or in public spaces like at the Dr. Lander Memorial Swimming Pool parking lot.

The amendment resulted in the application for the development of a commercial office building north of the new post office location, said Gordon.

“The developer came back to the table when he heard we were eliminating restrictive parking elements in the bylaw and submitted a development proposal,” he said. “In small communities like ours, a key economic driver is business retention and expansion and the restricted parking requirements in the land use bylaw was a massive deterrent to business retention and expansion.”

Another amendment in the land use bylaw was more clarity in the section referring to signage. Gordon said many developers and business owners found this section confusing.

“If a sign application or permit application is submitted, the land use bylaw provides much more clarity and makes it easier for that to be approved,” he said. “We removed the restrictions and now provided diagrams and illustrations for signs that are permitted.”

Gordon said input was collected at public information sessions and through a survey two years ago. The Black Diamond and Turner Valley Intermunicipal Economic Development Committee also gathered input from the business community, he said.

Among the suggested changes that came from business owners, said Gordon, was to allow merchants to host events throughout the year without requiring a permit.

“In discussions, council agreed that our local businesses would be allowed to host up to eight events in a calendar year for a maximum of four days,” he said. “There was a cost involved for every development permit application, and a process as well. It prohibited pop-up events.”

The restaurant staff had been hosting old fashioned street dances since 2017 and paying $250 for a permit each time, she said.

“We’re really excited,” said Ellingson. “Not having the cost makes things easier. Of course, with the restrictions still on we would rather not get that many people together this year, but we’re definitely going to aim for next year.”

To learn more about the amended land use bylaw visit turnervalley.ca