Turner Valley residents are buying their local distillery’s first batch of spirits almost as fast as it lands on shelves.
0
Jul 9, 2014 12:00 AM By: Tammy Rollie 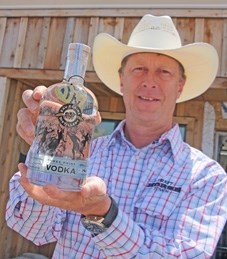 Turner Valley residents are buying their local distillery’s first batch of spirits almost as fast as it lands on shelves.

Eau Claire Distillery’s Three Point Vodka proved to be a hot item the second it arrived in stores in Turner Valley and across Calgary, with some stores running out of the product in days.

The vodka is Eau Claire Distillery’s debut drink and will be one of numerous handcrafted traditional artisanal spirits made from Rocky Mountain water and locally sourced grains harvested from farms within 100 miles in the province’s first small batch craft distillery.

Samples of the vodka were offered at Valley Cold Beer and Liquor Store in Turner Valley during the Canada Day long weekend and owner Sarah Harrold said 80 per cent of customers who came into her liquor store asked about it.

“It’s created a lot of buzz,” she said. “Everybody in town has been so interested that this is going up in our town. Everybody has been talking about it.”

The response to the Three Point Vodka, named after Three Point Creek – a tributary of the Sheep River that runs through Eau Claire Distiller founder David Farran’s land northwest of Turner Valley, was so overwhelming Harrold sold two cases in three days.

“They love it,” she said. “They say it’s comparable to Grey Goose, that it’s a perfect sipping vodka. Some people said I wouldn’t waste this in a mixed drink.”

“It would be perfect with a couple of ice cubes in it sitting back relaxing and sipping it,” she said. “It’s got a very smooth flavour. I love it.”

Farran, the former vice-president of Big Rock Breweries, is ecstatic at the reception the first batch of brew is getting.

“We’ve had an incredible response, greater than I thought,” he said. “We are getting a number of retailers that sold out of the product they ordered immediately, which is great for us.”

Farran said the distillery is now brewing up their Parlour Gin, featuring saskatoon berries and rose hips, which should be in stores by mid-July.

Eau Claire’s products will be available for sampling once the tasting room is open in late August or early September. Farran expects there will be a good selection of products by that time.

Turner Valley was Farran’s top choice when considering where to locate his distillery. He purchased the former Turner Valley Theatre, built in 1923, a year ago and since hired six employees to help him operate the company.

“I love Turner Valley,” he said. “It’s a great community and we’ve had amazing support from the community. It’s just really nice to know people are so supportive of a new business.”

Having grown up in the Millarville area, Farran was able to connect with local producers to ensure most of his products, including his barley, rye, wheat and potatoes, come from southern Alberta.

Just down the street from Eau Claire Distillery, it’s the start of a beautiful relationship for Valley Cold Beer and Liquor Store.

“It’s great to have a new company to be able to work so closely with,” Harrold said. “It’s building a new relationship with someone right in our back yard, basically. We are very fortunate that David decided to put the distillery here in town.”

Harrold said her customers are already asking when Eau Claire Distillery’s single malt whiskey will be available, which Harrold was told won’t be for another three years as it needs time to age.

“I’ve had a couple of customers say, ‘Can I put my name down to get one of the first bottles when they finally get it?’” she said. “I don’t know if I can start a list three years in advance.”