Canadian flags will be waving high as citizens of all ages celebrate their nation’s birthday in Black Diamond.
Jun 25, 2014 12:00 AM By: Tammy Rollie 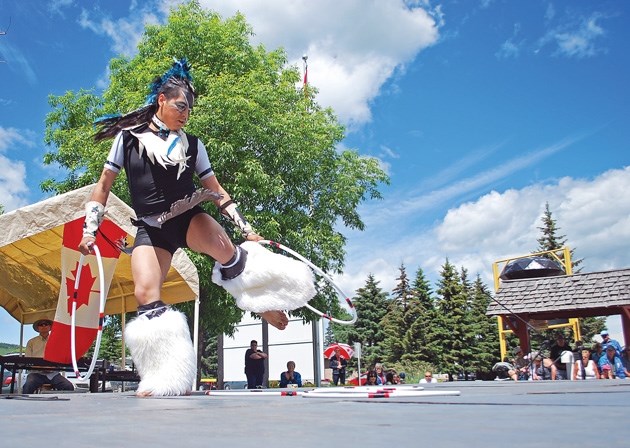 This dancer with the First Nations International Dancers Co. puts on a show for Diamond Valley and area residents during Black Diamond&#8217; s Canada Day celebrations in a previous year. This year&#8217; s festivities begin July 1 at 1 p.m.

Canadian flags will be waving high as citizens of all ages celebrate their nation’s birthday in Black Diamond.

The Town of Black Diamond is showing its patriotism with a variety of activities and entertainment from rock-and-roll music to traditional aboriginal dances during its annual Canada Day Diamond Valley Style at the municipal centre from 1 p.m. to 5 p.m.

David Petrovich, the Town’s economic development and events coordinator, is bringing foothills rock and roll bands Dead Cat Bounce and Puttin’ on the Foil to the stage, as well as the First Nations International Dancers Co. to showcase an important part of Canada’s history.

“We want to celebrate the past and we just felt it was very important to always include the First Nations,” said Petrovich. “We do have a fair number of First Nations who come to town and shop. We want to honour that as well as the historical aspect. There’s a lot of historical meaning in (their dances).”

Youngsters will be entertained throughout the afternoon with activities such as bouncy castles, airbrush tattoos, caricatures, sidewalk chalk, tossing games and sporting equipment like skipping ropes and badminton sets.

Petrovich said the community’s Canada Day celebrations often bring as many as 500 people to the municipal centre each year - the majority of whom reside in Black Diamond and Turner Valley.

Food and refreshments won’t be provided because Petrovich’s goal is to get residents and visitors supporting local businesses.

Local restauranteur Marv Garriott, who owns Marv’s Classic Soda Shop in downtown Black Diamond, said July 1 is typically one of his busiest days of the year and he has high expectations this year with Canada Day falling on a Tuesday.

“Most everybody will take four days off instead of three,” he said. “I’m predicting a very good weekend. Any day that’s a holiday is a good day.”

While residents will enjoy the local shops and a plethora of activities throughout the afternoon, many will miss the annual fireworks show at the end of the day.

Petrovich said with the town on a fire ban because of water restrictions the community has been on since it lost its water treatment plant in the June 2013 flood, the event was cancelled again this year.

“We are disappointed that we can’t be the ones hosting them,” he said. “It’s just such a loud and proud celebration for us. Lighting up the night gives you the goose bumps and saying yes we are proud to be in Black Diamond, and Canadians as well.”

Costs to host the Canada Day festivities in Black Diamond is supplemented by the Government of Canada, which provides a $4,000 grant for the community’s celebrations, said Petrovich. He said that amount covers most of the costs for entertainment.

For more information about Canada Day in Diamond Valley go to www.visitblackdiamond.ca