A foothills council is returning to evening meetings while giving councillors more time to make decisions effective next month. Turner Valley Town council decided at its Nov.
0
Nov 26, 2014 12:00 AM By: Tammy Rollie 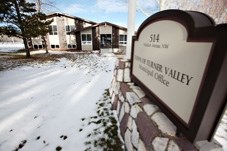 Turner Valley Town council&#8217;s regular business meetings will now take place the first and third Monday of each month at 6:30 p.m. with committee of the whole incorporated into the meetings only when needed.

A foothills council is returning to evening meetings while giving councillors more time to make decisions effective next month.

Turner Valley Town council decided at its Nov. 17 meeting to increase its business meetings to two a month and eliminate its committee of the whole meetings, where council discusses issues but no decisions are made, altogether so it can make decisions in a more timely fashion.

Mayor Kelly Tuck said the suggestion came from Municipal Affairs personnel during a meeting with council and she is in full agreement.

“We need to get some things moving,” she said last week. “When we only met twice a month, that’s a month later when any other decision is made.”

Council decided in January to hold committee of the whole meetings during the day as a pilot project to accommodate staff who were needed to provide information during the meetings.

“Most of us sitting on council could make day meetings work and it was just a way of trying to alleviate staff working nights,” said Tuck.

When it became obvious Coun. Lane Park wasn’t always able to get the time off work to attend the meetings, Tuck said that needed to change.

“We all have a right to be able to be there,” she said. “If we continue day meetings we would always be minus one councillor. When we were elected into this position we were elected with the understanding we would have council meetings during the nighttime. Going to night meetings makes sense. All of council needs to be engaged.”

While Tuck believes evening meetings are more suitable for the public, she isn’t so sure holding the committee of the whole meeting during the day had an impact on the public.

“Talking to residents it didn’t matter to them one way or another when we met,” she said.

Council’s regular business meetings will take place the first and third Monday of each month at 6:30 p.m. at the Turner Valley municipal building effective Dec. 1. In the event the meeting falls on a holidays, it will be rescheduled to the following evening.

Barry Williamson, the Town’s chief administrative officer, said if council requires more time to discuss specific issues during its regular business meetings it can enter into the committee of the whole and then return to the regular council meeting when the discussion is finished.