Travellers driving along Highway 22 will feel like they’ve stepped into the past when arriving in Black Diamond in years to come.
Oct 22, 2014 12:00 AM By: Tammy Rollie 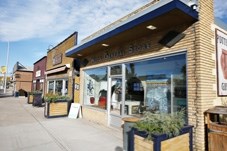 Black Diamond town council recently approved expanding the historic boomtown look in its downtown to cover new developments along the highways in the community.

Travellers driving along Highway 22 will feel like they’ve stepped into the past when arriving in Black Diamond in years to come.

The Town of Black Diamond is applying its 1920s and ’30s boomtown historic design standards in downtown to new commercial, industrial and institutional development along provincial highways in town. The decision was made during its regular council meeting on Oct. 15.

Rod Ross, the Town’s planning and development officer, told council at last week’s meeting the boomtown theme has become an integral part of the community’s image and some developers have already adhered to it, although it wasn’t required.

“The town hasn’t really had the authority to require that, but developers have agreed that it’s important to support the town’s design as a unique independent place,” he said.

Ross said the downside to having these regulations in place is they could receive pushback from developers.

“Sometimes the developer doesn’t want to incur the standards as initial costs on the development or simply do not like them and have their own ideas of what they want the building to look like,” he said. “There may be a corporate image the developer wants to follow.”

Despite Ross’ statement, the idea wasn’t met with opposition during the public hearing held before the Oct. 15 council meeting.

Only David Schellenberg stepped forward to comment on the idea, telling council expanding the boomtown look is not only a good idea, it’s what makes Black Diamond special.

“There is a reason there are 300 motorcycles here on a summer weekend,” he said. “That’s the thing that we cultivate… is that identify we have in our town and that’s a good thing. We are selling a brand here as Black Diamond and that can only further us down the road.”

Following the public hearing, Deputy Mayor Jim Deacon told council potential developers may choose not to build in Black Diamond because of the standards. These include a large wooden false front and specifications on placement, colour or location on windows, awnings, signage, landscaping and building materials.

“If they don’t want to use the standards we have because they have their own identity what happens then?” he asked council. “Are we going to lose buildings like a hotel chain, like we are hoping to attract?”

Coun. Mike Ross said he doesn’t see the standards as a problem.

“When you look at those chains like the Best Western, they build their buildings to conform,” he said. “They are pretty happy doing that. Anybody that (doesn’t), we probably don’t want to play with them anyway.”

“Why did they do that, because they wanted to set up shop in there,” he said. “There was a market for it.”

“You can go to Cochrane, Banff and Canmore - all of them have got a central theme around their architectural controls and this is not doing anything different,” said the Black Diamond mayor. “I think that many of the businesses that are already in town and the businesses that are coming into town will want to be part of the momentum.”

Brown said the design standards are essential for Black Diamond to celebrate its iconic history.

“What it’s going to do is accentuate the brand that we have and celebrate our historic boomtown look,” she said. “It’s a big step for the town. We have another tool in the toolbox to assist new developers coming in and say this is the brand we are going to have for our community and we want you to be part of the community, we want you to be proud of the historical aspect of the community.”