Integrity and honesty are among the words used to describe a man who breathed new life into Turner Valley more than a decade ago.
0
Jan 21, 2015 12:00 AM By: Tammy Rollie 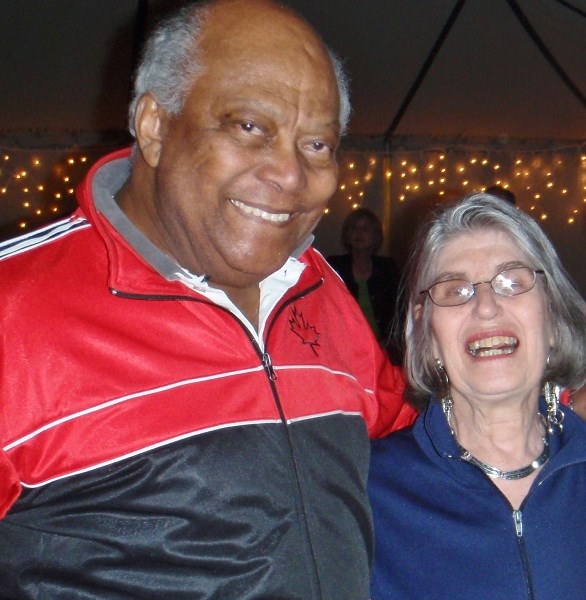 Jack Pitter, with wife Lorrie, played a significant role in developing Turner Valley during his two terms as mayor.

Integrity and honesty are among the words used to describe a man who breathed new life into Turner Valley more than a decade ago.

The unexpected passing of former Turner Valley mayor Jack Pitter earlier this month had family and friends celebrating his life’s achievements in the community’s Foothills Cemetery on Jan. 15.

Pitter, who had lived in Turner Valley for about 15 years before moving to British Columbia with his wife Lorrie in 2001, passed away at the age of 80 on Jan. 3 after suffering from pneumonia.

“I’ve known Jack for a very long time,” said Turner Valley Mayor Kelly Tuck. “When you met Jack you wanted to spend time with him because he had a presence. He probably had the kindest heart and was very soft spoken. When Jack spoke you listened.”

Tuck worked with Jack and other residents to start the Diamond Valley Boys and Girls Club. She said the native Jamaican was also instrumental in getting the Friendship Trail built, starting the Westend Regional Sewage Services Commission, creating the Valley Neighbours Club, reactivating the Diamond Valley Chamber of Commerce, forming a tourism committee and working to improve the cemetery, among various other projects and initiatives.

In fact, it was Pitter’s community mindedness and drive that inspired Tuck to run for mayor.

“He was a great mentor,” she said. “He had a way. Jack was involved in a lot of things in this community.”

Also impressed with Pitter was John Lockhart, general manager with Community Futures Highwood, who worked alongside the businessman for the independent, non-profit organization.

“His passion both with community and for fellow man was unequal to anything I’d ever seen,” Lockhart said. “He really, truly represented what he cared about and that was everybody. He saw so much value in the things that we were doing that as soon as he was out of politics he applied for and was accepted as a community at large person on the board of directors.”

Lockhart said Pitter was a quiet, passionate and community-minded individual.

“He was always involved in one thing or another, all for the good of the people and the region and Turner Valley, in particular,” he said. “I don’t think you would ever meet a nicer man.”

Pitter worked hard to assist with building business across the region through the organization’s various programs, said Lockhart. When Pitter and Lorrie moved to British Columbia, Lockhart continued to stay in touch.

“He would frequently call me and ask for business ideas every time he wanted to start a business,” he said.

Especially proud of Pitter’s accomplishments and warmed by the reflections of this great man last week is his son Bob.

“Seeing the value that he carried into the world was probably the neatest thing,” he said. “There was a recurring theme just how honest he was and the other thing that came back is he always had ideas for improvement and things that could be done to make better situations.”

Pitter said his dad was very proud of the community and always felt more could be done in Turner Valley.

“He said there was so much opportunity there for more and I think he wanted to do more,” he said. “He was pretty instrumental in a bunch of stuff. He was a man of integrity and honour. That was something he sort of exemplified, that fabled knights at the roundtable thing.

“He actually tried to live that life. He still believed that a handshake is my word and my bond.”