Public input could play a large role in deciding whether or not a waste transfer station in Black Diamond is closed.
0
Jan 28, 2015 12:00 AM By: Tammy Rollie 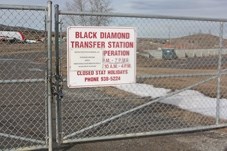 An online survey is expected to help determine whether to upgrade the or shut it down.

Public input could play a large role in deciding whether or not a waste transfer station in Black Diamond is closed.

The Towns of Black Diamond and Turner Valley are asking residents to take a survey to determine who is using the facility and for what purposes after the MD of Foothills identified a need for $50,000 in repairs to the station – an amount it’s not prepared to cover on its own.

The 20-year-old station collects about 100 tons of leaves, branches and grass clippings a year, and about 30 tons of garbage that is transported to the Foothills Regional Landfill annually.

“To put approximately $50,000 in there at the level of usage that it has for the MD with so many other priorities would be a hard stretch,” said Harry Riva-Cambrin, the MD’s municipal manager. “Strictly from the MD’s perspective it would be unlikely that we would keep the facility open. It’s getting to the point where if we don’t fix it up we would have to close it down anyway.”

After realizing it’s in need of serious upgrading – including an office for the station worker, who now sits in his vehicle, concrete pads to prevent trucks from sinking in the ground and repairing collapsing sidewalls –- the MD met with the two Towns to discuss the next steps. The Towns agreed on a survey.

“They are just assessing what their need is for it,” Riva-Cambrin said. “If it has value to our neighbours then it makes sense for the three of us, as we do on many things, to cooperate to keep it open.”

Riva-Cambrin said the transfer station provides an accessible place for residents to drop off organic yard waste and additional bagged garbage and that use of station has been steady year after year.

Turner Valley Mayor Kelly Tuck, who uses the transfer station regularly for her organic yard debris, said she would like to see how much town residents are using the facility and what they’re using it for.

The short four-question survey asks residents how often they use it to dispose of their branches, grass clippings, etc., hazardous waste and garbage, and what community they live in.

Tuck said the Town has helped pay for such materials as new cement pads and gravel on an as-needed basis, but that the station is not a regular budget item.

She said she would like to see the service remain available to residents.

“It’s really being conscious about recycling every single thing we can,” she said. “I like to keep the material out of the landfill.”

Tuck said she understands keeping the facility open may cost taxpayers, which will also be a determining factor in whether to keep it open, yet grants could be explored.

Black Diamond Mayor Sharlene Brown also believes the facility is a huge asset to the community.

“Any time that you have the availability of having some sort of area where you can drop off your debris, grass, trees, whatever, if you don’t have a drop off close to the community what happens to the debris?” she said. “It creates more landfill. It shortens the life span of the landfill or increases tipping costs.”

Brown said the transfer station is a facility that’s well utilized, it’s just a question of determining who is using it.

“Are those people that are utilizing the facility from Black Diamond, and what’s the percentage?” she said. “Before Black Diamond makes a decision we want to see how many people use that transfer site.”

Brown said the Town put a minimal amount of operation dollars in the transfer station so far, and wants to justify a potential cash infusion before entering a partnership with the MD.

The surveys are located at www.turnervalley.ca and www.town.blackdiamond.ca and the town offices.