Residents opposing the possibility of higher density housing on two Black Diamond lots are expected to fill council chambers this week. The Town of Black Diamond is hosting public hearings at its regular council meeting on Nov. 5 at 7:30 p.m.
0
Nov 5, 2014 12:00 AM By: Tammy Rollie 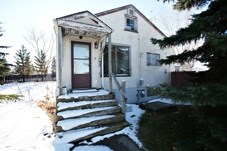 This abandoned house on the corner of Fifth Ave. and Second St. SW is one of two properties the Town is requesting public input from after developers expressed interest in building higher density housing. The public hearings take place Nov. 5 at 7:30 p.m.

The Town of Black Diamond is hosting public hearings at its regular council meeting on Nov. 5 at 7:30 p.m. to gather input from citizens before making a decision on whether or not to increase housing density from low to medium on a property located on the corner of Fifth Ave. and Second St. SW and an additional site on Third Street SE.

Rod Ross, the Town’s planning and development officer, said he’s received interest from developers to build a duplex on the southwest property and 16 townhouses and duplexes on the southeast property.

The southwest property measures approximately 60 by 170 feet, and is located south of C. Ian McLaren School.

Ross said a developer approached the Town stating an interest in building a duplex on the lot and dividing it down the middle, yet for that to occur other provisions would have to be made.

“Even though this lot is pretty big it’s not big enough to subdivide in half and meet the minimum parcel size,” he said, adding it would require site-specific amendments. “The design doesn’t leave much room for a front or back yard.”

Twenty-six residents who live in the neighbourhood signed a petition requesting that First, Second and Third Streets SW remain single-family dwellings with no secondary suits.

Lynne Mason, who lives down the street from the lot, said she signed the petition because of her frustration that some single-story homes in her neighbourhood are being replaced with two-story homes, and the smaller homes is what attracted her to the neighbourhood in the first place.

“We moved here because it’s so quaint, it’s got such character,” she said. “We want to keep the uniqueness of Black Diamond.”

Mason, who plans to attend tonight’s public hearing, said she feels the Town is “allowing people to build any type of monstrosity in the middle of town,” and she would like to see it stop.

“Buildings two to three stories high are going up,” she said. “They are so out of place. It’s almost like they don’t care unless they get money in their hands. Everybody is frustrated by it all.”

The Town is also looking for input regarding revising the Kaiser Area Structure Plan - which addresses the area south of Highway 7 and consists of a series of acreages - from low to medium density residential.

“It’s been amended a bunch of times,” he said. “There are no infrastructure plans at this time.”

Ross said a developer expressed an interest in constructing eight townhouses and eight multi-level duplexes on a lot in that area on Third St. SE.

He said the property is located across the street from apartment buildings and near an affordable housing complex, yet the Town will likely have to determine if the intersection of Third Street SE and Highway 7 can handle an increase in traffic. The Town will also have to address the lack of sidewalks and current infrastructure, he said.

“It’s questionable whether our infrastructure can support it at this time,” he said. “Given the fact that we’ve got a lot of small parcels in that area we really need to do some infrastructure planning to coordinate the development of these small parcels. It’s not the wisest thing to proceed with development without the plan even if this one particular application could be managed.