Citizens cool off with lower restrictions

Diamond Valley residents struggling to beat the heat can turn on their outdoor taps for the first time in more than a year.
0
Aug 13, 2014 12:00 AM By: Tammy Rollie 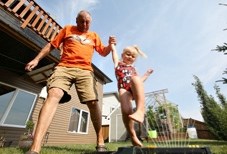 Turner Valley resident Merv Page and his three-year-old granddaughter Amelia Myles jump through a sprinkler in his backyard. The Towns of Black Diamond and Turner Valley downgraded the water restrictions from level three to two on Aug. 8, allowing residents to fill pools, use sprinklers and water their yards on their respective days.

Diamond Valley residents struggling to beat the heat can turn on their outdoor taps for the first time in more than a year.

With Turner Valley’s raw water reservoir now at normal capacity, the Towns of Turner Valley and Black Diamond downgraded their water restrictions from level three to two and lifted the fire ban on Aug. 8.

This means residents can now water their lawns, wash their vehicles and homes and fill their pools and hot tubs.

The announcement was met with relief and elation in both communities after residents spent the last 13 months under strict water use following the loss of Black Diamond’s water treatment plant in the 2013 flood, resulting in Turner Valley having to supply both towns with water.

“Everybody was excited this morning,” said Turner Valley resident Mandy Gentry, who was at the Dr. Lander Memorial Outdoor Swimming Pool on Aug. 8. “It’s a big deal.”

As a result of the water restrictions, Gentry said her three children spent almost every day at the pool to keep cool as temperatures surpassed 30°C several days this summer. The pool’s water was purchased by the Town outside of the community and shipped in.

Black Diamond resident Gordon Greenwood said his lawn and some of his plants are pretty brown after going through most of the summer with no watering.

Greenwood said he is happy about the lessening of the restrictions.

“This is unbelievably good news,” he said. “I’ve put in many thousands of dollars in landscape on the property and that landscaping doesn’t look anything like the amount of money I put into it simply because it’s pretty brown. I’m not too happy about it, but I have my health and I have my job.”

After two weeks of testing the productivity and quality of the water it was decided both sources were adequate, he said.

“The whole thing about restricting water use is not because we want to restrict people in any way, it’s so as a community we can actually flourish and our water supplies recover so we are not worried about this in the future,” he said.

Petrovich still cautions the public to continue to be diligent with their water use.

“We are telling people be smart about your water use because this is a test to see how the wells and everything will hold up to the increased water usage,” he said. “If our capacity is not increasing we could easily move to a level three and fire ban again.”

Petrovich posted the announcement on Facebook on Aug. 7 and said in less than a day the message had 58 shares.

Turner Valley Mayor Kelly Truck said it’s important people stick to their watering days and time restrictions. Those not abiding by the water restrictions could face a $100 penalty for the first offense, 250 for the second and $800 for the third.

“We’re able to turn on the tap but please remember to use your rain barrels as much as possible,” she said. “We’re still trying to fill the water reservoir and would like to have it filled and ready for winter.”

Tuck said she’s thankful to those in the community who were so diligently abiding by the water restrictions this past year.

“We wouldn’t be where we are if they didn’t all work together,” he said. “They definitely followed exactly what was laid out to them. We are well aware that you couldn’t just run the tap any time you wanted to.”

Tuck said while some residents had a hard time swallowing the water restrictions, more were fired up over the fire ban.

“That’s been a huge controversy,” she said. “People say we have our pit but we are not going to be irresponsible.”

Tuck said the town’s water supply wouldn’t have been sufficient to put out a structure fire and still provide water for both towns, therefore they had to take the necessary precautions.

According to Barry Williamson, Town of Turner Valley chief administrative officer, four wells and an overland pump are supplying water to Turner Valley’s raw water reservoir – which was measured at 68 per cent capacity on Aug. 8.

To read more specifics on the level two water restrictions please go to your Town’s website.