A Black Diamond merchant has big plans for a local strip mall and his grocery store, and putting a stop to the frequent fender benders in his parking lot is top on his list.
0
Dec 10, 2014 12:00 AM By: Tammy Rollie 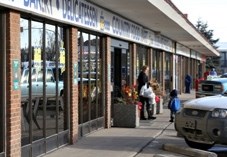 Diamond Centre Mall in Black Diamond will experience some changes in 2015 including a boomtown false front, wider parking lot and canopied front for the AG Foods Country Food Mart.

A Black Diamond merchant has big plans for a local strip mall and his grocery store, and putting a stop to the frequent fender benders in his parking lot is top on his list.

Mark Muller, owner of Country Food Mart AG Foods, is purchasing a strip of land alongside the parking lot at the Diamond Centre Mall from the Town of Black Diamond so he can widen the parking lot and put an end to the continuous problems it causes shoppers.

“The parking lot was designed pre big dually trucks,” he said. “There’s been numerous fender-benders over the years. We want to make their shopping experience as good as we can.”

Black Diamond Town council approved the sale of a 135 metre long by 1.5 meter wide strip of land in a unanimous vote at its regular council meeting on Dec. 3.

Mayor Sharlene Brown said she agrees with the need to expand the parking lot.

“That parking lot created a lot of headaches for many years for people,” she said. “It’s a skinny parking lot with diagonal parking on both sides. When you’re driving there is not a lot of room for two-way traffic going through. Widening it is just going to be helpful for on-site parking.”

The 2,204 square-foot parcel was valued at $24,800, based on recent sales of vacant land in the area, but Muller said he met with Town administration and together they agreed on a price of $12,400.

The final price was based on a similar cost for land sold as part of a daycare development on second Street SE.

“This is a four foot wide skinny little strip of grass,” said Muller. “It’s not really any use of anything except our parking lot expansion.”

Muller said he plans to have the parking lot resurfaced and repaved this spring. Although he considered rearranging the lot’s layout, he ultimately decided to keep it as is.

“We were throwing around different ideas like making the parking lot one way, but I think that would case a lot of confusion,” he said. “It will be the same number of parking spots, but more space between the north and south parking. Right now we get these bottle necks if two trucks are parked opposite of each other and two vehicles can’t pass.”

The parking lot expansion is one of Muller’s many plans for improving the Diamond Centre Mall and Country Food Mart.

Construction has already begun to build a boomtown motif, false front across the entire length of the shopping centre, which Muller hopes will be complete next spring. The complex consists of Muller’s grocery store, a Canada Post office, liquor store, dental office, realty office and two empty bays, he said.

“Right now the shopping centre looks a little tired and this will freshen it up and make it more attractive,” he said. “We are hoping to draw more tourism to it. (The boomtown motif) has been very successful in downtown Black Diamond.”

Muller also plans to add a canopied front to the entrance of Country Food Mart AG Foods so shopping carts can be stored outside and to allow more room at the customer service desk and to add a fourth check-out till.

Muller also plans to construct a sitting area to the west of his grocery store with picnic tables and greenery for 2015.

Once these projects are complete, Muller will look at the much bigger project of expanding the square footage of his grocery store in upcoming years.

“We are packed,” he said. “Every corner is full. We would like to improve our receiving situation.”

Muller said the time is right to make some changes.

“The last few years have been good,” he said. “The town as a whole has different businesses opening up and it leaves less and less reason to leave town. We are positive for the future. I think we’re heading down the right road to improve the store and make it a place where people want to come in.”

Brown said she is glad to see business thrive in Black Diamond.

“Any time that we can, as a community, increase economic development potential is a great thing,” she said. “I’m a real supporter of local businesses and a real supporter of sustainability. We have a pretty strong business community compared to other communities our size.”

Brown said the money from the sale of the land will go into an account to funds recreational purchases such as playground equipment and public spaces.”