Cause determined in summer glider, tow-plane collision near Black Diamond

Two men were killed when the glider and its tow plane collided near the Cu Nim Gliding Club last July.
Feb 10, 2020 6:20 PM By: Okotoks Today Staff 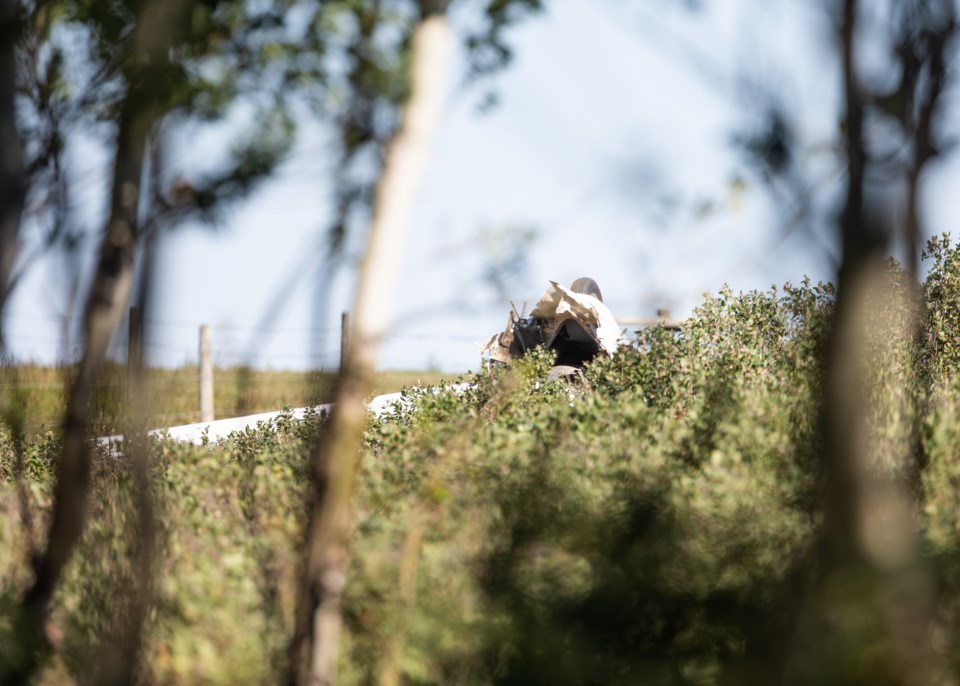 Emergency crews responded after a glider collided with the tow plane just west of the Cu Nim gliding club on July 26. (BRENT CALVER/Western Wheel)
BLACK DIAMOND - Human error is being attributed to a collision that killed two men gliding at the Cu Nim Gliding Club near Black Diamond last summer.

The Transportation Safety Board released a report on its investigation into the July 26 incident where instructor Allan Wood, 68, and student Adam Leinweber, 18, were killed in the mid-air crash west of 128 Street shortly after the glider and tow plane detached.

The report states the Cessna 182N aircraft was towing a Schleicher ASK 21 glider for instructional purposes.

The tow plane had completed two towing operations that day before the incident. It was also the second flight of the day for the student and instructor.

The report states that at 3:49 p.m., the tow plane departed with the glider in tow. Shortly after, the glider flight crew radioed the tow plane pilot requesting he carry out some medium bank turns as part of the exercise. This was not briefed prior to departure.

The tow plane turned left about 145 degrees and then right about 90 degrees. The glider released from the towline halfway through the right turn, according to the Transportation Safety Board.

Typically, glider pilots release from the towline when the air crafts are in straight and level flight, states the report.

The report states the tow plane pilot was unaware of the early release, and when the glider flight crew thanked the pilot on the radio for the tow, the pilot couldn’t see the glider, but executed a left clearing turn of approximately 80 degrees, as is standard procedure upon a glider release.

The pilot then turned right in an effort to locate the glider and, unable to see it, turned left 90 degrees. No attempt was made to communicate with the glider to determine its position, states the report.

At 3:55 p.m., at an altitude of approximately 6,075 feet above sea level and 34 seconds after the glider’s release, the tow plane’s propeller struck the glider’s empennage.

The collision caused the vertical and horizontal stabilizers to separate from the glider, which crashed to the ground, states the report. The instructor and student were wearing parachutes.

The report states the pilot, a chief tow pilot and volunteer with the Cu Nim Gliding Club, held a valid private pilot licence and was a valid flight instructor. He had accumulated approximately 740 flight-time hours in single-engine aircraft. He completed an annual tow pilot competency flight the previous spring.

The glider instructor held a valid pilot licence with a valid flight instructor rating. He was also a volunteer with the Cu Nim Gliding Club. The last entry in his personal log was made on July 1, 2019. At that time, he had accumulated approximately 900 flight-time hours made up of dual, pilot-in-command and instructional flight time.

The student held a student pilot permit and had begun his flight training with the Cu Nim Gliding Club in 2017. His first and only solo flight was conducted on October 28, 2018 for a flight time of 0.3 hours. At the time of the incident, he had recorded 76 dual flights, totalling 26.8 hours of dual flight time.

The report concludes that neither pilot saw the other aircraft in time to avoid a mid-air collision and that pilots are encouraged to broadcast their intentions to maintain the situational awareness of other aircraft.

This report concludes the Transportation Safety Board of Canada’s investigation into this occurrence.