Diamond Valley residents who rallied around changing a campground’s name to honour an avid volunteer had their wish granted last week.
0
Jul 23, 2014 12:00 AM By: Tammy Rollie 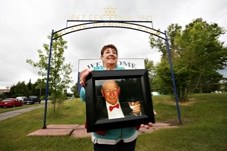 Maureen Parsons holds a photo of her father Bob Lochhead in front of the former Centennial Campground in Black Diamond, which was renamed Bob Lochhead Memorial Park in his honour.

Diamond Valley residents who rallied around changing a campground’s name to honour an avid volunteer had their wish granted last week.

Lochhead’s daughter Maureen Parsons, of Black Diamond, is honoured at council’s decision last week. She said her father moved to Turner Valley in 1983 and was an avid volunteer in both towns ever since. Lochhead, who died over the winter, was a recipient of the Black Diamond of the Year Award and Alberta Senior Volunteer Award.

“He was always helping people,” she said. “If you wanted him to do something he would do it. He could never say no to anyone.”

It was Black Diamond residents Robin and Jan Tudor who first came up with the idea of paying tribute to Lochhead.

“Everyone admired him so much we thought it would be nice to have something to pay a tribute to him,” said Jan. “We didn’t even think twice about it.”

Jan said the pair started talking about the idea last week and brought it to the Griffiths Seniors Centre, where Jan is a member, and members began collecting signatures throughout Diamond Valley to support the idea.

“You could hardly get the paper out of your hands fast enough for people to sign,” she said, adding they collected almost 300 signatures in less than a month.

Among those who signed was Eileen Brownell.

“He was one of our valley’s ambassadors,” she said. “He helped so many people. He never had a bad word to say about anybody. He was quite an amazing person.”

“He curled on Wednesday and died that night,” she said. “We were all stunned.”

Lochhead worked as a prison guard for the Turner Valley RCMP and was a foster parent to nine children over the years, she said. In his later years he drove seniors to dentist and cancer treatment appointments and helped them with their grocery shopping. He also helped start the Valley Neighbours Club in Turner Valley.

The suggestion to rename the campground after Lochhead was well received by four members of council.

“It’s going to be a brand new campground,” said Coun. Mike Ross, referring to the reconstruction taking place as a result of the campground being damaged in the 2013 flood. “Give it a new name.”

“Mr. Lochhead did tons of work for lots of years and I agree in recognizing his endeavours,” said Brown.

“We do have a couple of other people we talked about naming something for so with the amount of time that Bob put in the whole area and the support he gives to people all over these two towns is incredible,” he said.

“I don’t have a problem with renaming it.”

Not all council agreed with the idea of changing the campground’s name and suggested other ways to honor people like Lochhead for their contributions to the community.

“I think we have to be consistent with regards to renaming existing areas,” said Coun. Ruth Goodwin, who suggested a commemorative plaque be placed in the campground acknowledging community volunteers.

“I think there is other options to recognize people who have contributed to the community,” said Coun. Jackie Stickel. “Perhaps as opposed to going forward and renaming maybe find some place in the community where there is a recognition space for people who do donate a great amount of time.”

Coun. Judy Thomson said she knew Lochhead well and appreciates his volunteer work, but the campground’s name should remain as is.

Having worked alongside Lochhead for years, Lee remembers his had work getting the campground ready for the season, cleaning it up and helping close it in the fall.

“When we needed a volunteer his was one of the first hands up all the time,” he said. “He was exceptional.”