Campgroud to reopen on Canada Day

Black Diamond merchants are hoping for a better summer with the re-opening of the town’s campground.
Jun 18, 2014 12:00 AM By: Tammy Rollie 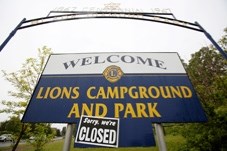 The Black Diamond Foothills Lions Campground is expected to open to the public on July 1.

Black Diamond merchants are hoping for a better summer with the re-opening of the town’s campground.

The campground was damaged a year ago when the Sheep River washed away land, flooded sites and carried away buildings, signs, picnic tables and fire pits in the 2013 flood.

Foothills Lions Club past-president James Lee was told by the Town earlier this spring the campground would likely have to remain closed this season because of the construction of a nearby dyke. With the dyke now complete, the club was given the go-ahead to open the campground.

For George Nielsen, owner of the Black Diamond Bakery & Coffee Shop, the open campground means more walk-in traffic for the bakery this summer.

“It will definitely benefit us to have it open,” he said. “People will go out for breakfast and lunch as well. On a rainy day nobody cooks outside so they all come to the restaurants.”

Lee said the club was able to hire two employees and its members will spend the next several days cleaning up sites, cutting grass, sweeping the road and putting up signage before July 1. Most of the sites were prepared last year.

The club will purchase a trailer to serve as the camp office and a shack to store mowers and other machinery, said Lee.

“We’ve got a lot of cleanup work to do,” he said. “It will be a group effort, somewhere around 20 lions will put in 25 hours each.”

Lee said because the reopening was sudden, getting a full campground might be a challenge this season.

“A lot of our seasonal campers that we traditionally have had made other arrangements because they were told we were closed,” he said.

“It’s sort of a crapshoot right now because we are a late player into the game again this year. It’s an unusual circumstance for us.”

The club opened the campground at the end of last summer for a few weeks and remained busy. Lee hopes for the same result this year.

“It’s vital not only for the Lions and for our ability to fund initiatives for our service organizations and clubs and our school bursaries and things like that, but it’s also vital for the business,” he said.

“Two years without the campground would be a real hit to some of these businesses. It’s huge.”

Debi Leong, owner of the Black Diamond Liquor & Cold Beer, said opening the campground is a big deal for businesses.

“Every business is going to benefit from having that open,” said Leong. “How big that impact is going to be is going to be directly related to how many sites they are going to have with power and if the campground actually fills. Anytime you have anybody it’s obviously better than nothing.”

David Petrovich, Town of Black Diamond Economic Development and Events Coordinator, said when talking to merchants a few weeks ago about the possibility of the campground staying closed for the summer many were concerned.

Petrovich said with the hard work of construction crews and the Town working together to complete river mitigation in the area efficiently was the determining factor to opening the campground and the businesses will feel the impact, even if just a little.

“It’s not going to be their best year, but on the other hand any amount is fantastic,” he said. “It represents a significant tourism boost for our town to have it.”

For more information or to book a site at the Black Diamond Foothills Lions Campground go to www.foothillslionsclub.ca.