Turner Valley residents in the mood to celebrate can no longer mark occasions with fireworks inside the Town boundaries. Changes to the Town’s fire protection bylaw prohibit residents from firing off fireworks anywhere in town starting Sept. 30.
0
Sep 24, 2014 12:00 AM By: Tammy Rollie 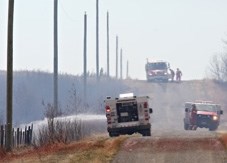 Fire crews work to douse a brush fire started by fireworks along Highway 22 south of Longview in spring of 2014. Changes to Turner Valley&#8217; s fire protection bylaw hopes to extinguish fireworks related blazes in the town.

Turner Valley residents in the mood to celebrate can no longer mark occasions with fireworks inside the Town boundaries.

The bylaw, approved by council on Sept. 15, bans the use and sale of fireworks in town unless they’re part of a fireworks displayed lead by a licensed technician, who is authorized by a fire permit and approved by the Explosives Act.

“In reality there is only four or five properties in town that would be eligible,” he said. “If we are going to do them it’s got to be done right and safely and most properties don’t have the proper clearances.”

Baxter said there is the odd complaint of fireworks in town, but it’s a more common problem in rural areas where the department responds to grass fires caused by motorists setting off fireworks from their cars.

“We do hear fireworks frequently on bigger weekends like Family Day,” he said. “It’s a small minority. I’m expecting some backlash, but it’s a safe, wise choice.”

Baxter said the Town has been working on changes to the fire protection bylaw over the last two years, consulting with communities and fire departments of similar size.

“We wanted to make sure it was done right,” he said. “It’s not much different than most municipalities around us.”

Another change is the addition of fines for those not abiding by the bylaw. Baxter said the 2004 version referred to fines, but none were created.

“It’s not like we’re coming down hard on anything,” he said. “The fees that should have been there originally are now there and in line with other municipalities. It was not driven by anything other than the fact that it didn’t exist. Everything else is pretty standard.”

The bylaw also gives authority for peace officers to enforce the rules stated in the bylaw, while the previous bylaw permitted enforcement by the fire department only, said Baxter.

“It was a lot of cleaning up and defining, having actual definitions and make it a document that actually makes sense,” she said. “There were a lot of parts that were missing.”

Tuck said administration is updating many of its bylaws and policies.

“There are some that are over 10 years old,” she said.

Changes to the fire protection bylaw will be placed with residents’ water bills and available on the Town website.