The oldest business to serve the Foothills area still stands along a busy street in Black Diamond as a reminder of simpler times.
Aug 1, 2018 8:44 AM By: Tammy Rollie 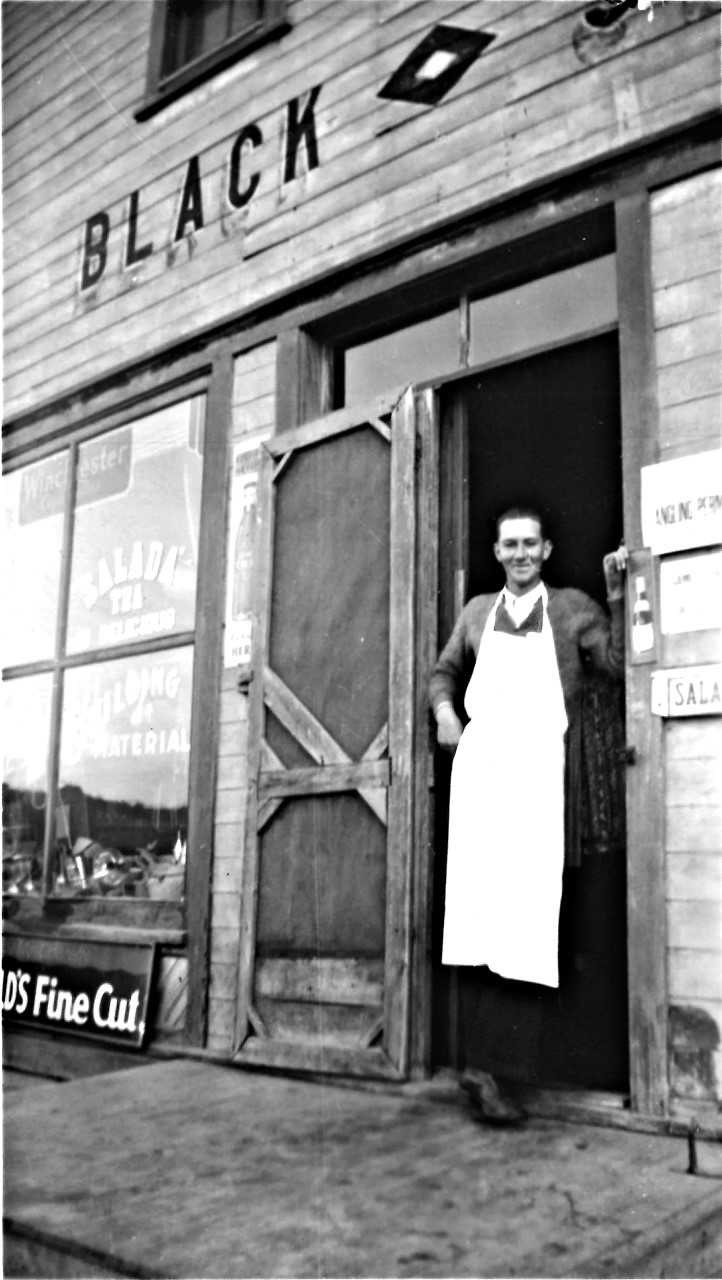 William “Bill” Blakeman stands in the doorway of the Black Diamond Store, more commonly known as Blakeman’s General Store, in the 1940s. The store was operated by three generations of Blakemans until the early 21st century.

The oldest business to serve the Foothills area still stands along a busy street in Black Diamond as a reminder of simpler times. Blakeman’s General Store, situated at 206 Government Road, was the centre of the community for decades, providing customers with much-needed groceries, supplies and even gasoline at a time when travelling from community to community was more than a quick trip to town. “In the old days it was the gas station, the post office, it was everything,” said Brian Blakeman, the third generation of Blakemans to run the store. “In the real old days my grandfather would go fishing and just leave the front door open so customers would write what they bought on his counter book.” Blakeman’s grandfather, John “Jack” Blakeman Jr., had opened the store in 1921 after moving to Black Diamond from England, where he grew up, two years earlier. He had followed his father, John Blakeman Sr., who moved to Black Diamond in 1911 and opened a butcher shop. During the First World War, Jack returned to England to join the British army. In 1920, he returned to Alberta and opened a butcher shop in Okotoks, marrying Elizabeth Ridgwell. John convinced his son to return to Black Diamond and, with encouragement from local residents to save a trip to Okotoks for groceries and supplies, Jack started the Black Diamond Store in a building believed to have been built by Dell Carr in 1909. The Black Diamond Store became better known over the years as Blakeman’s General Store. To keep perishables from spoiling in the 1920s, a building behind the store was filled with blocks of ice cut from the Sheep River and packed in sawdust to last into the summer. To keep customers satisfied, Jack purchased whatever was requested - baking powder, axle grease, horseshoes, housewares and building supplies. Most of the supplies were transported from Calgary to Okotoks by train, then horse and wagon to Black Diamond. Later, Jack bought a Model A Ford to haul his supplies over the rough roads from Okotoks. Blakeman’s General Store prospered with the increased activity of the oilfield. In 1925, Jack had a gas pump installed in front of his store, making Blakeman’s the first gas station west of Okotoks and supplied the oil companies working in the area with fuel and goods. It wasn’t unusual for the Blakemans to be awakened in the middle of the night by a motorist requiring gasoline. The barrels of cylinder oil sat just inside the door along with tires, tubes, chains, fan belts and other necessary accessories for early cars. In the early years of the store, the Blakemans used to push the counters back and host dances. In the cold months, when the coal heater would go out at night, they would wake to find bottles of products freezing and breaking. After the Second World War started in 1939, with increasing shortages and subsequent rationing, there were times when there wasn’t enough of many products to fill orders. Dozens of items were stashed under counters and doled out to regular customers with lists being kept to see everyone got a fair share. The Great Depression of the 1930s and the rationing of the Second World War made for lean years for Blakeman’s General Store, but it carried on for two more generations. Jack’s son, William “Bill” Blakeman, quit school in Grade 9 to help his father run the store into the 1960s. He and his brothers were raised upstairs while Jack operated the store. “Dad joined the air force and after that he came back home and ran the store,” said Blakeman. “My dad was a workaholic. He lived and breathed that store.” Blakeman recalls children buying penny candy from the store. “Many may generations of kids remember that store,” he said. In 1985, Blakeman took over the store and worked alongside his father for another 15 years. “I was on the road as a musician for 10 years as a drummer and I came home in ’85 and said, ‘I need to come off the road and have a bit of a rest,” Blakeman recalls. “He said, ‘Why don’t you take over the store? It was good for me and it will be good for you too.’” Blakeman carried on the tradition for another generation, following in his father’s and grandfather’s footsteps. “We used to bag our own potatoes and cut all the meat by hand for people,” he said. “That Blakeman’s store is this town, as far as I’m concerned. We broke the ice, so to speak.” When big-box grocery stores opened in Okotoks, Blakeman said it killed his grocery businesses. He closed the store in 2003 and replaced it with Garage Sale Center, which opened periodically on weekends in its later years up until 2010. “I’m a junk collector, a hoarder,” Blakeman said. “I hated seeing the old building sit there so I fixed it up and put a grill in the back and was selling burgers and hot dogs right out of the store. It was a little restaurant and deli for a while after the groceries filtered out.” Blakeman closed the Garage Sale Centre in 2010. “It just wasn’t lucrative enough,” he said. “I still sell stuff on the side.” Since last fall, three ambitious entrepreneurs rent the building as their own shop. They sell essential oils, herbs, antiques, high-end clothing and even offer massage therapy, calling it Bertie’s General Store in honour of Blakeman’s mother who helped Bill run the store. For Blakeman, it keeps the tradition of Blakeman’s General Store going, serving the needs of the people of Black Diamond into another century.