Committee chair says almost a third of this season's plot holders are new residents.
Jul 14, 2021 8:00 AM By: Tammy Rollie 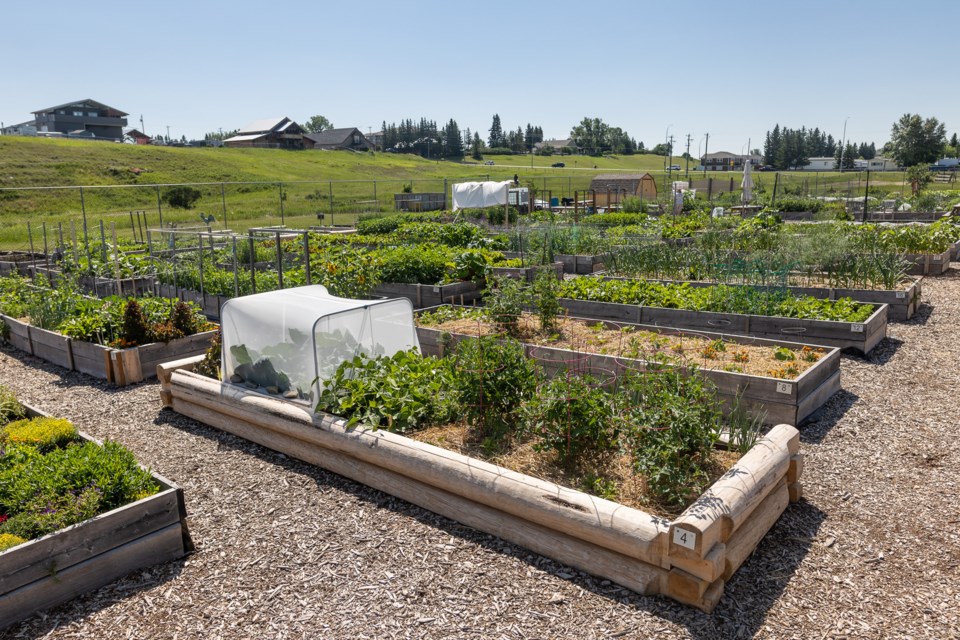 The Diamond Valley Community Garden in Black Diamond has seen an increase in interest as the town grows, with almost a third of plot holders being new residents. The garden's committee has been at work upgrading and replacing older wooden beds with timber-frame plots, partially paid for with funds from a $1,000 donation by the Foothills Lions Club.Brent Calver/OkotoksTODAY

Educational seminars have been put on hold at Black Diamond’s community garden due to the pandemic, yet the fenced-in facility in the town's northeast remains abuzz with activity.

Jane Toews, chair of the Diamond Valley Community Garden Committee, said gardeners have been hard at work planting, weeding and watering in one of the few activities that’s maintained its popularity throughout the COVID-19 pandemic.

One change Toews has noticed this past year is the amount of gardeners who've recently moved to the community compared to past years. Almost a third of plot holders are new residents, she said.

“There seems to be more people from Calgary coming out here," she said. "People are retiring and are looking for an opportunity to have a garden.”

The Diamond Valley Community Garden boasts 70 raised 16-by-four-foot plots. All but one are spoken for this season.

Toews said while there’s typically a short waiting list for plots in past years, the addition of a community garden near Turner Valley’s Riverside Park changed that this year.

The Diamond Valley Community Garden has been in high demand over the years due to its raised plots, numerous fruit trees and bushes, accessibility to tools, water, benches and picnic tables, and educational seminars that took place before the pandemic, she said.

Volunteers are working this year to replace the wood bordering four of the raised beds with logs, said Toews, with a fifth scheduled to be replaced this fall.

“They’re probably 14 years old and they’re starting to bow because we have beds that are 16 feet long and they’re coming apart at the ends,” she said. “Some of them are fixable and some just have to be replaced.”

Toews said the committee is spending considerably more money on the logs than the previous wooden borders in hopes to double the lifespan of the plots.

To help cover the expenses, the committee is using money from its annual plant sale, reserves funds and some of the $1,000 donation made by the Foothills Lions Club last spring.

In addition, plot holders paid $60 for their plots this season, a $20 increase over last year, Toews said.

“I found it uncomfortable, but the other people on the committee said we’ve got to do it," she said of the increase.

“It’s more of an environment that we’re offering, simply because the garden has been there for quite a while,” she said. “There’s been an awful lot of work to make it look really nice.”

Toews said the committee is addressing a growing gopher problem.

“They’re coming into the garden and digging little holes and eating people’s peas and things like that,” she said. “I think it’s a peak year. These kind of things happen in waves.”

Toews said the Town’s efforts to treat the gophers last spring seems to have made little difference, so the committee is working on setting traps to keep the numbers at bay.

“You can see gophers all over the place,” she said. “There’s a lot of gophers and they’re big and fat.”

The committee is also dedicating time this season to creating a society in collaboration with the Community Garden Riverside Park in Turner Valley.

“We can access grant money as a society that we don’t have access to right now,” said Toews. “If we’re looking at replacing 70 beds over the next five years we have to have a lot more money. That is not covered by the Town.”