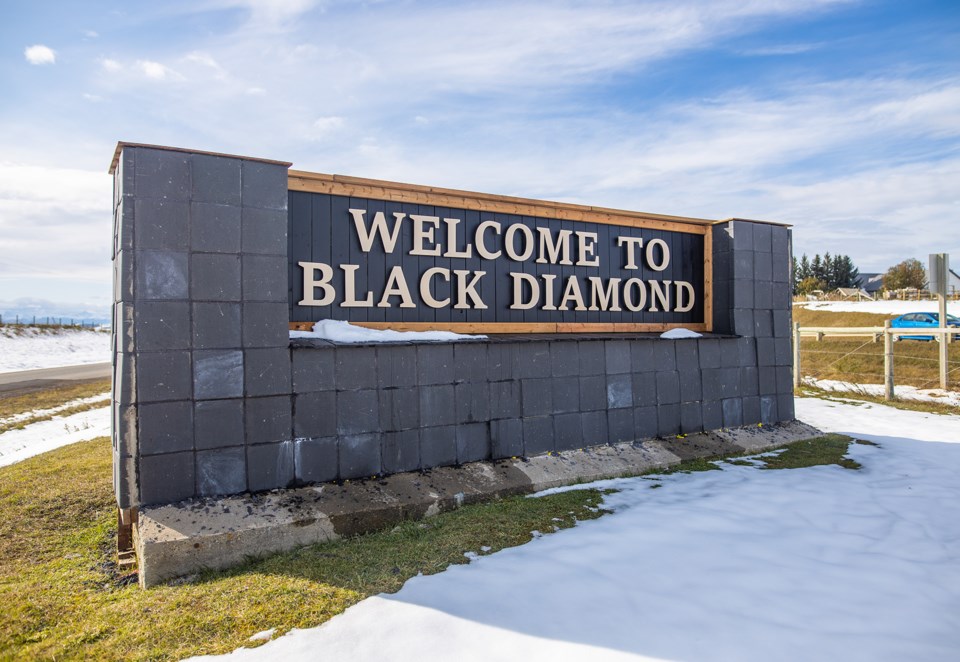 The welcome signs east of Black Diamond received some negative comments from the public via social media as work was in progress last week. (Brent Calver/Western Wheel)

The new face for Black Diamond’s welcome signs at the east side of town is complete.

Black Diamond Town council discussed the progress of the signs along Highway 7 at its Oct. 2 meeting, during which time special events co-ordinator Kelly Tuck told council work was delayed due to heavy snowfall.

The discussion followed comments on a local Facebook site where some residents complained about the new look.

At last week’s council meeting, Tuck said wood framing and edging needed to be done. The work was completed on Monday.

The complaints on social media centred around the look of black bricks placed in front of the original signs’ river rocks.

“We worked really hard to save them,” Tuck said of the original signs, built in 1978. “The integrity of the structure is really sound, but the cement around the river rock wasn’t. The existing river rocks were falling off. It was decided to reface it.”

The staggered, uneven bricks are part of the design feature, she said, due to the constraints faced with positioning the bricks directly on the rocks.

“When you’re trying to refurbish something that is that old, we knew we were going the have elements of where the stones were going to be staggered,” she said. “We knew there was going to be some challenges, but the end result is we received a lot of positive comments. People are excited to see something different so we’ve had amazing comments back on Facebook, people stopping in at the office, social media.”

Tuck expects those negative views on Facebook will now change.

“Once everyone sees the final product everyone is going to be very happy,” she said last week. “I know we’re going to have a good final product in the end.”
Coun. Brian Marconi said administration should have reported the progress of the sign on the town website to inform citizens of its status.

“I’m not sure why we haven’t,” he said. “This is something that should have been automatic.”

Marconi added that he likes the look of the signs, a sentiment that was shared by Coun. Sharon Hart.

“It gives me the thought that Black Diamond was built on coal and coal is not perfect,” said Hart. “You have the varying depths, you have the different shades. I think once it’s done it’s going to be fantastic.”

Hart agreed with Marconi that administration should have posted an update about the sign on its website.

“We’ve had a lot of publicity on social media about it and I think maybe just a little bit of a notation saying the signs are not complete for anyone who has questions will definitely answer a lot of questions that are floating around out there,” she said.