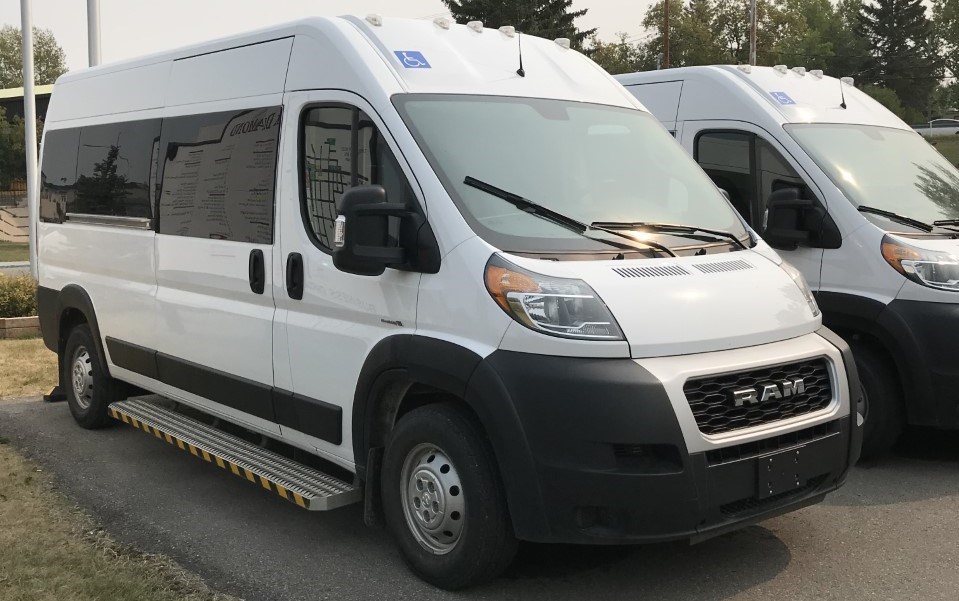 Rubber is closer to meeting the road for Black Diamond’s public transit strategy.

Black Diamond town council voted in favour of proceeding with its transit implementation strategy at its Nov. 4 meeting.

While details are still being finalized in the partnership with the Boys and Girls Club of Foothills, which will operate the service, the vehicles have already been acquired and rates have been set.

Black Diamond Mayor Ruth Goodwin said the Town hopes to implement the plan “in the very near future.”

Trips within the Black Diamond and Turner Valley area will cost $3, and fares to or from Okotoks will run for $7, Goodwin said in a phone call.

It will run two days a week initially, until the Town can assess usage. There will be scheduled trips to Okotoks, and the bus will be available on-demand when not engaged for such trips.

"I believe that it will be fairly successful and this will be utilized more often than not,” said Goodwin. "I do believe that the success and sustainability of any community depends on connectivity.

"This offers our senior citizens, our teens, our lower-income citizens, it will offer them independence and a more varied way to get to each community and Okotoks.

"You have to make accommodation for those that have vehicles and those that don't.”

Goodwin said she believes that offering transit service could serve to attract people that may want to live in the community, but otherwise couldn’t due to lack of mobility.

"Even if you do have a vehicle, and let's say your spouse is requiring the vehicle that day and you've got kids and you need to make an appointment in Black Diamond and you're in Turner Valley,” she said.

"This just becomes an option for these people.”

“Until such time as we create a town or city that doesn't require people to move around significant distances, we're going to need to help people,” Bain said in a phone call.

"It may also provide an impetus for someone who can't stay in the area because they need to be close to something not available here — it will allow them to stay here in the town they've chosen to live in.”

The program is projected to cost around $40,000 to operate for the first year, hopefully making $10,000 back in user fees.

Goodwin said this, like any service offered by the town, isn’t meant be a for-profit enterprise.

"As to whether or not a service like this subsidized by the Town is warranted, I also draw people's attention to the fact that we have many things in this community that we subsidize. Sports facilities aren't money makers. They recover some of the cost, but the taxpayers subsidize the use of those facilities,” Goodwin said.

"Do I think that it's warranted and it's something that's needed in communities?

The Town will be engaging Turner Valley in continued talks about the transportation project and whether or not they are interested in entering into partnership.

Bain is hopeful, but ultimately the decision falls to the other council.

“It's a decision for Turner Valley to make. We've made a decision on what our town council believes is best for our area,” Bain said.

The Dodge passenger vans, equipped with wheelchair lifts, were acquired for $55,000 each from Southland Transportation over the summer.

A proposed service agreement will be going before council in the meeting on Nov. 18.