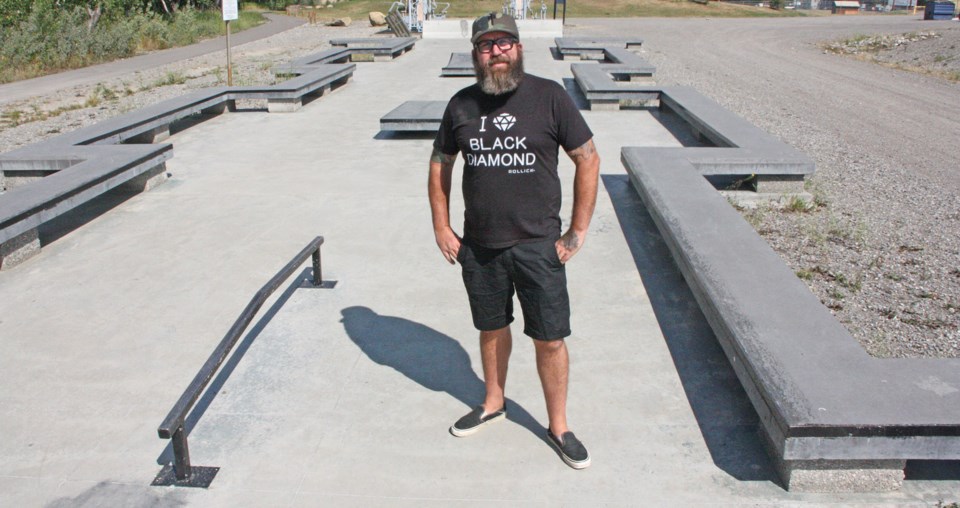 Colin Fleming has raised more than $12,000 in just one month, enough to pay for Phase 1 for his plans to modify the Black Diamond skateboard park. (Tammy Rollie/Western Wheel)

Just one month after getting the wheels rolling on an initiative to modify Black Diamond’s skateboard park, a local businessman has collected enough money to acquire designs that will go to the public for voting.

Colin Fleming raised more than $11,000 since receiving permission from Black Diamond town council at its Aug. 19 meeting to open an account with the Town in his initiative to modify the skate park behind the Oilfields Regional Arena.

“A few people just showed up with cheques and cash – anything from $30 to $1,000,” said Fleming, adding cheques must be written to the Town of Black Diamond Skate Park Fund. “It’s almost been a full-time job with people calling in. It’s just amazing.”

Fleming, who operates bike repair shop Rollick Co. out of his garage, is working with Calgary’s New Line Skateparks on the project, which has completed more than 300 skate park projects in the past 20 years.

Phase 1 calls for New Line to draft modification designs, create an online survey for citizens to vote on their preferred design and create a bid package for the project, which Fleming said comes with a $10,500 price tag.

“They will put together the whole package and help us understand what grants we qualify for,” he said. “They work with a lot of towns on this stuff.”

Improving the skateboard park has been a priority of Fleming’s since he moved to Black Diamond two years ago. Fleming has popped a few ollies in his day and has seven and 10-year-old sons who skateboard.

After hearing complaints in the community about the park, which upon his own inspection he found to be restrictive with its hard-edged design and lack of flowing transitions and multiple terrain styles, Fleming decided to take action.

He initially reached out to the Jeff Ament’s Skatepark Projects out of Montana, headed up by the Pearl Jam bass player, which assists small United States communities in building skate parks.

“They helped me get started, but they couldn’t do the work here in Canada,” he said.

Fleming said he met with various companies and professionals in the industry, spoke with local youth and joined Black Diamond’s parks and recreation committee to make his idea of building a multi-use park for skateboards, scooters and bikes into a reality.

“Any time I’ve talked to the kids they just want to see curves and have some flow,” he said. “There’s a science to it that I don’t know. That’s what New Line is there for.”

Once word got out about Fleming’s plans, the community support began pouring in.

Fleming not only received donations from local businesses and individuals, but several stepped up to host their own fundraisers for the initiative. One even offered to donate rebar for the construction.

The Canadian Brewhouse in Okotoks is hosting a silent auction for the cause on Dec. 5. The $10 admission supplies a free drink, and a free shuttle service will provide transportation between Black Diamond and Okotoks, Fleming said.

“All of these companies around here have been calling saying, ‘What can we do to help?’” he said. “It means that I was right by doing this, that people wanted it.”

With the $10,500 raised for Phase 1, fundraising is underway to cover the cost of the improvements, which Fleming expects to cost about $120,000.

“When we initially started talking about doing this we went really small,” he said. “Now that I’ve seen the response we might do bigger than what we originally planned to. We can start getting creative.”

Once the concepts are designed, Fleming said two or three will be put to the public for polling in the online survey. Fleming and New Line Skateparks will then work on a budget, further fundraising initiatives, grant applications and, finally, construction, which is expected to begin in spring 2021.

“I’m just very thankful that everyone is backing me on this project,” he said. “I couldn’t do it without everyone’s support. We’ve got a long ways to go, but I’m ahead of where I thought it would be.”