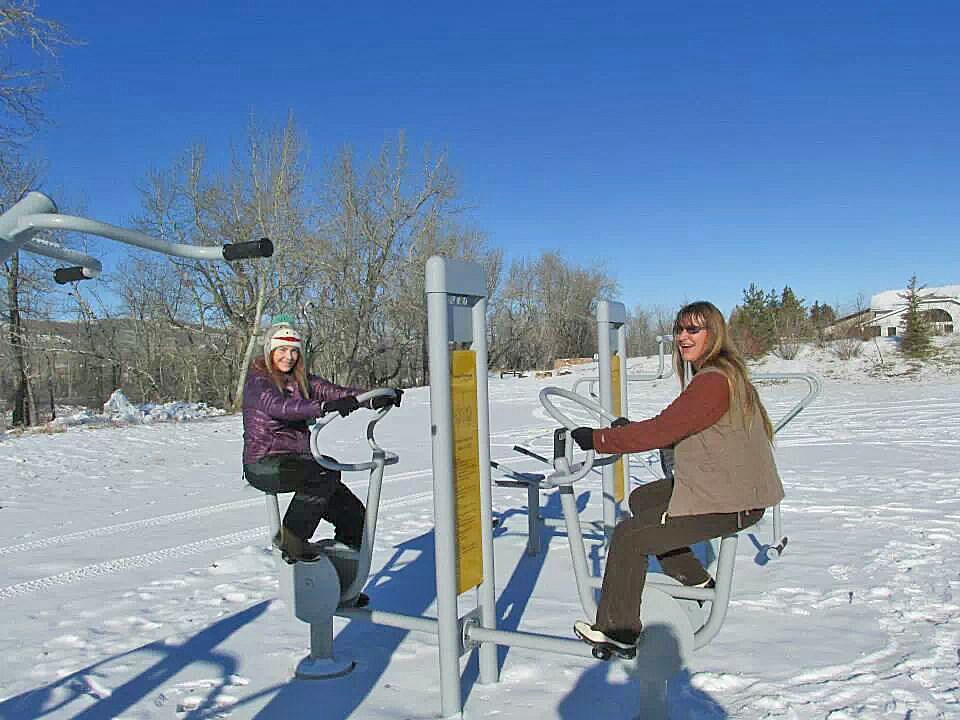 Gita Grahame and Tessa Avodo work out on the outdoor fitness park near Oilfields Regional Arena. The Black Diamond Parks and Recreation Committee is gathering public input on how to improve recreation as it works to develop a strategic plan. (Wheel file photo)

Public input will play a major role in how a committee tackles future recreation projects in Black Diamond.

The Black Diamond Parks and Recreation committee held an open house Oct. 17 and is collecting feedback in an online survey as it works to complete its strategic plan that will provide direction in how the Town pursues recreation the next 10 years.

About 20 people attended the open house in the municipal building from 2 p.m. to 9 p.m., which featured a video of existing facilities in Black Diamond and Turner Valley and had computers available for people to take the online survey.

Having just learned to play pickleball, she said she would like the opportunity to play the sport indoors without having to go to Okotoks.

In addition, her husband plays in a 70s plus hockey league in Calgary that Parker said would be ideal to have in Black Diamond.

“He likes hockey so much that he does that hour drive,” she said. “It would be nice to have more chances for the old timers to play here.”

The avid cyclist said she loves the paved trails and takes regular exercise classes at the Griffiths Senior Centre, but there’s one facility requiring change.

“The off-leash dog park is not fenced in,” she said. “I have beagles and they would take off and end up in Okotoks or something if they took after an animal. I have to keep them on a leash.”

Singer attended the open house to learn what activities are available for herself, a stay at home mom, and her five-year-old daughter.

“I think they should look at building an indoor pool or a recreation centre for kids to go to and have soccer, basketball and many different sports in it,” she said. “We need to have something for the adults to do. That’s why I think a recreation centre would be the best. You can put a gym in there for people to work out.”

Parks and Recreation Manager Les Quinton, the Town liaison for the committee, said comments from residents like Singer and Parker will be taken into consideration when the committee completes its strategic plan.

“We’re finding out what other things people are wanting, what they’re using, what they want to spend money on,” he said. “We’re hoping we can get enough information to help us look at things for longer term. The committee will analyze the information that will go into our strategic plan.”

Most people Quinton spoke with at the open house talked about the pathways in the two communities, he said.

“Most of them really like what Black Diamond is doing with their pathways,” he said. “There was a few from Turner Valley that were not happy with Turner Valley’s pathways. They don’t have as many and they don’t connect up.”

Quinton said the most recent strategic plan for recreation expired in 2017 and that the Town needs to look long term at where to put its energy when it comes to recreation.

“If you’re trying to do a large project you need to put money into reserves to do the project,” he said.

Quinton said the committee will collaborate with Turner Valley, which also conducted a recreational survey recently, to see how the two communities can work together on recreation in the future.