Town council is requesting that the paving contractor for Riverwood Crescent apply another treatment of epoxy and sand patchwork after residents complained of loose tar and sand after summer patchwork.
Oct 8, 2019 8:30 AM By: Tammy Rollie 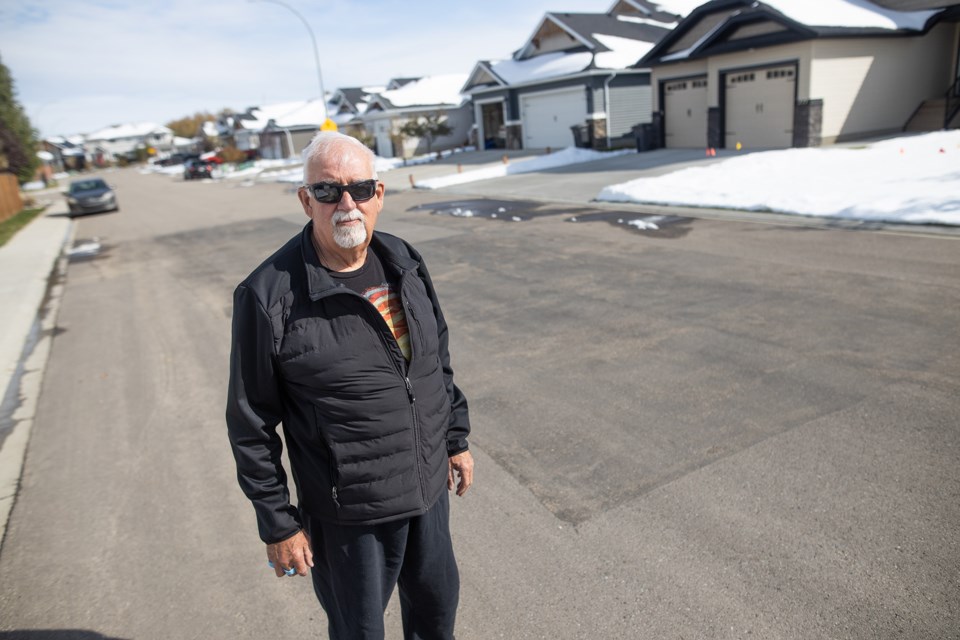 Black Diamond resident Ted Davis poses in front of one of the asphalt patches on Riverwood Crescent on Oct. 3. Davis has taken issue with the workmanship of the patches in his neighbourhood. (Brent Calver/Western Wheel)

Several attempts to patch portions of Black Diamond’s Riverwood Crescent has residents frustrated as tar and sand continue to track in their driveways and garages.

Resident Ted Davis said he’s contacted the Town four or five times since last spring to express his concerns about the “inadequate” repair work on Riverwood Crescent near the Oilfields General Hospital in Phase 2 of the Riverwood development area.

Davis said each time crews repair the road it’s left in a “shabby, inferior manner with many deficiencies...”

“Several areas were done so poorly that the contractor had to come back at a later date to fix them throughout Riverwood Crescent,” he said. “When the weather warmed up vehicles pulled up tar, dragging it into driveways and garages. I lost a sandal in the tar crossing the street to my neighbour’s.”

Black Diamond Town council agreed at its Oct. 2 regular meeting to request that the contractor apply another treatment of epoxy and sand patchwork to the road and add a year warranty in response to the residents’ concerns and a letter written to council from Davis. The contractor’s existing two-year warranty is up on Nov. 1.

While Davis said he’s happy with council’s request for a warranty extension, he’s worried the repair work will come up with the same results.

Davis said the road should be milled and repaved to bring it to the standard of the rest of the town.

“Everyone that I talked to, and there were 11 households, don’t feel the road is sufficient,” he said. “This road needs to be fixed properly. It’s a terrible road. As new homeowners paying the taxes we’re paying, I feel 100 per cent entitled to that.”

“The patching is only part of the problem,” he said. “I’m not an expert in this field, but down each side of the road you can see the marks of the teeth of the skid steer all over the entire road.”

Black Diamond CAO Sharlene Brown told council that the paving contractor repaired portions of Riverwood Crescent twice last summer, yet the issue of tar and sand continued to be a problem.

She said the Town doesn’t see a need to remill and repave the road at this point.

“The (contractor) and engineers for Riverwood believe they have done what they need to do to satisfy the pavement,” she said. “The tar and sand are a hindrance to a lot of people, but it’s not affecting the long-term lifecycle of the pavement.”

Coun. Daryl Lalonde asked whether the contractors are missing a step or taking a shortcut on the road repairs.

“Can we find out what the proper process is so we don’t get the short stick on this?” he said.

Riverwood Crescent was initially paved in 2014, she said.

When the temperatures climbed in the spring, Brown said the epoxy hadn’t adhered the way it should have.

“The Town is now going to request that another application be done,” she said.

“We’re going to request another year warranty period so if something happens it gives us the right to advise the contractor that it’s not working and we may need to explore alternative solutions.”