The pilot project, which began in June and was set to expire Jan. 8, 2021, saw the Town of Okotoks contracted to perform curbside waste collection and disposal for 980 dwellings in Black Diamond.
Dec 23, 2020 11:00 AM By: Brent Calver 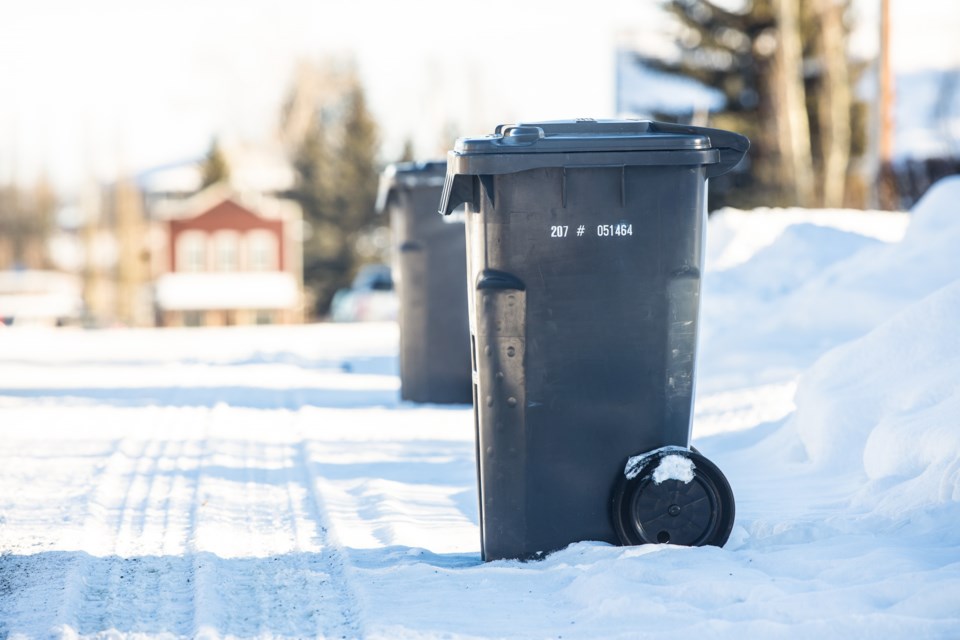 Waste bins sit out ready for pickup in Black Diamond on Jan. 3, 2019. Black Diamond town council voted Dec. 16 to extend their contract with the Town of Okotoks for waste management to 2023. File photo Brent Calver

The Town of Black Diamond will continue its partnership with Okotoks for garbage collection.

The pilot project, which began in June and was set to expire Jan. 8, 2021, saw the Town of Okotoks contracted to perform curbside waste collection and disposal for 980 dwellings in Black Diamond.

Black Diamond CAO Sharlene Brown said in an interview that she was pleased with the outcome of the pilot.

Brown said one upside to working with the larger municipality was savings.

"Part of the reason why we went into the relationship with Okotoks was to reduce our long-term capital costs,” Brown said. “Instead of doing truck replacements and saving for those assets, there might be a more regional kind of thought pattern that might be beneficial for all of us.”

Paul Lyons, waste services manager for the Town of Okotoks, said in an interview he was pleased that the partnership was continuing and looks forward to continued collaboration with neighbouring municipalities.

“What Okotoks is currently demonstrating is its commitment to finding a regional solution for our problems that the region is faced with,” Lyons said.

“Whether it's a cost situation, or whether it's an expertise situation, I think what this demonstrates is the municipalities leveraging the expertise that (Okotoks) has, and working together, instead of duplicating service."

“This is just the first step to implementing recommendations from the Regional Solid Waste Management Plan that was developed earlier this year, and endorsed by councils,” Lyons said. “So it really puts us on the pathway then, to achieve some environmental outcomes.”

Lyons added that the plan identified the Foothills Regional Landfill as an “invaluable resource that we need to protect.”

He is hopeful that the success of the partnership will encourage other municipalities to collaborate and implement the recommendations and programs in the waste management plan to divert more waste from the landfill.

“I think that as we work together, we can get closer to developing a model that other regions can use,” Lyons said. “That will help them to achieve sustainable development as they pool resources.”

Speaking to his motion in the Dec. 16 meeting for council to request that Town administration continue the partnership with Okotoks, Deputy Mayor Daryl Lalonde expressed his satisfaction with the pilot project and eagerness to continue the program.

“I think the pilot project, as we’ve heard, has gone very well, and I’m looking forward to working with them in the future,” he said.

Another bonus, Brown said, is the technology that Okotoks brings to bear. The bins come equipped with Radio Frequency Identification (RFID) tags built in that are scanned by the truck at pickup time.

This gives the towns metrics on how often bins are set out, confirmation as to whether they were picked up, and allows for logging of issues such as a truck not being able to pick up a bin due to it not being out in time or being overloaded.

Brown said a major concern before the program was residents calling to complain that their bin wasn’t picked up. With the RFID tags comes accountability and the ability to find and correct any issues.

The waste collection service also provides maintenance of the bins for minor repairs, rather than incurring the cost of a full replacement.