Learning the ropes early is a fact of ranching life, but two Foothills brothers are getting a taste of a whole different business.

“We wanted to promote that kids our age are ranch material and everything we do for the ranch,” said Jack Emerson, 12.

Growing up on their family ranch southeast of Black Diamond, sharing the work with their parents Scott and Page has been a fact of life.

As the COVID-19 pandemic kept the two C. Ian McLaren School students learning at home on the family ranch, they started the brand through a mix of entrepreneurial spirit and pride in their family's work.

“It started off one day when we were finishing chores one day and we came up with the idea that we should make a hat company,” Jack said. “We agreed to that and we talked more into it and wanted to make it about the Alberta Ranch Kid."

“Doing barn chores, helping in the winter time, calving, and driving the tractor,” are just some of the tasks Jack said he’s helped out with at home.

“We just want to teach kids what we do around the ranch and promote our business; we have hats, beanies, and patches.” 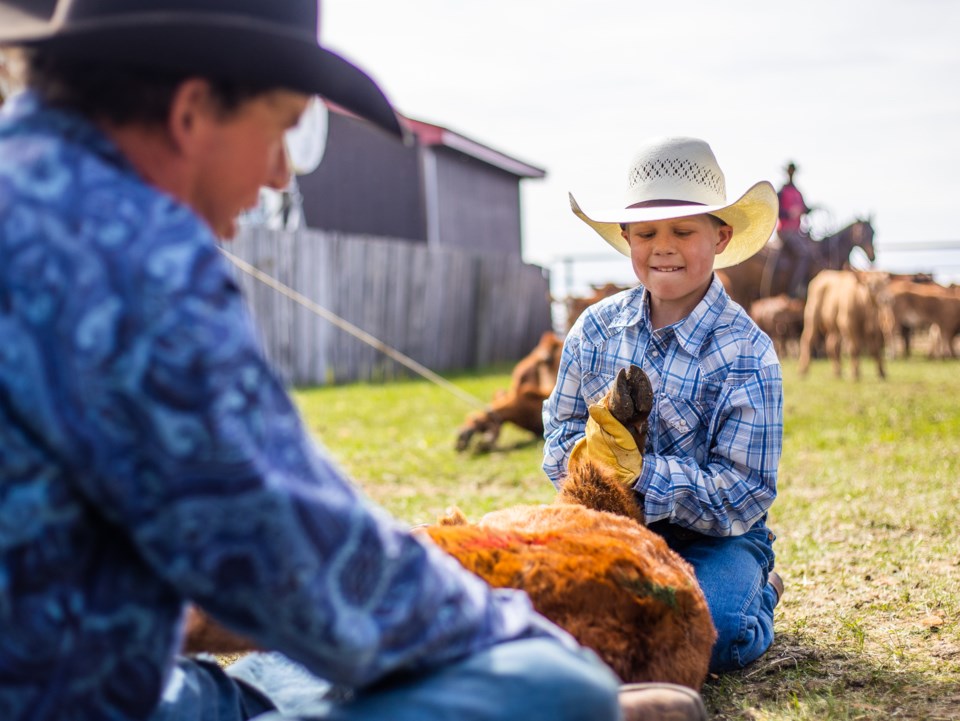 Jack Emerson holds a calf during a cattle branding near Black Diamond on May 22. Children on ranches often take part in their parents' work to learn the trade. By Brent Calver/OkotoksTODAY

For younger brother Casey, learning the workings of going into business has been exciting.

“It’s fun. We’ve had a couple bank meetings, we had to go do that stuff,” said Casey, adding the venture has given him an understanding of the costs of doing business and determining profit margins.

Like any business, the two had to pay a supplier up front for their initial run of merchandise with the goal of recovering the initial investment.

“You actually have to start making that money back eventually,” Casey said.

The profits of the venture, however, are part of a long game as the brothers save up to buy cattle for a herd of their own, he added.

Their mom has been proud of her sons’ initiative, helping them run their Instagram account @TheAlbertaRanchKid to promote their hats, where the two can be pictured taking part in everyday agricultural operations and events.

“It’s about showing other kids it’s a family operation,” Page said. “Everybody gets out the door, everybody drives the tractor, and everybody helps out in minus 20.”

“It’s promoting to show other families as well that it’s okay to have kids do hard work," she said. 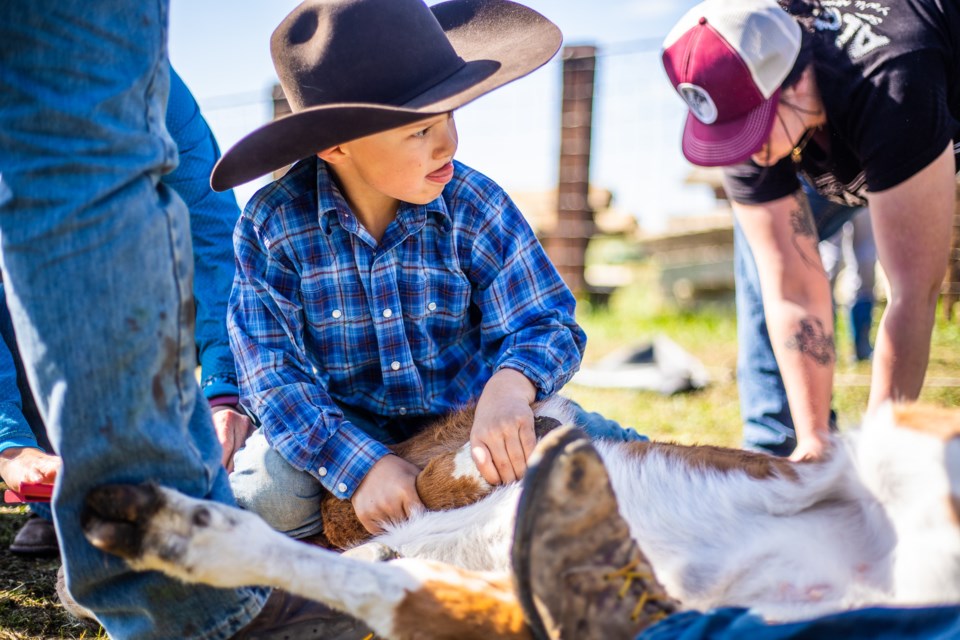 Eight-year-old Casey Emerson holds a calf during a cattle branding near Black Diamond on May 22. Children on ranches often take part in their parents' work to learn the trade. By Brent Calver/OkotoksTODAY

Page is also a hairstylist working in the Alberta film industry, while her husband Scott works as an animal wrangler and stunt man.

Dedication to the family business doesn’t make Emerson boys homebodies though, as the two are active in sports such as hockey and golf, as well as helping out neighbours during cattle brandings and other ranching operations.

Jack even made an appearance in season 11 of CBC’s Heartland in 2017, playing the quiet boy Brick for four episodes.

The two can often be spotted at Alberta rodeos, with Jack taking part in wild pony racing, and Casey being a regular in mutton busting events—sporting his signature sheepskin chaps.

Currently, the hats and other items are available for purchase by direct-messaging the Emersons’ Instagram account, instagram.com/TheAlbertaRanchKid