The decision to implement an urban chicken pilot project in Diamond Valley has some residents clucking with excitement.
0
Jun 25, 2014 12:00 AM By: Tammy Rollie 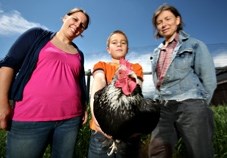 The decision to implement an urban chicken pilot project in Diamond Valley has some residents clucking with excitement.

Last week, Black Diamond and Turner Valley Town councils approved a one-year backyard hen pilot project in their communities that allows 20 residents to keep no more than four hens in their yards from Aug. 1 to July 31, 2015.

Among those excited about the decision is Black Diamond resident Berri-Lynn Levert, the representative for the Diamond Valley Canadian Liberated Urban Chicken Klub (CLUCK), who is eager to have her own hens this summer.

“One of the main reasons I want chickens is mainly for my garden and for soil preparation,” Levert said. “It’s much more even than eggs, I like the idea of hens attacking the weeds.”

The Towns worked together to develop regulations to keep the hens safe, henhouses clean and neighbours happy. This includes quarterly monitoring of participants by peace officers and Town staff and surveying neighbours six and 12 months after the project begins.

The portion of the animal bylaw prohibiting residents from having hens was reversed and penalties will be implemented for those exceeding the hen limit, failing to maintain a sanitary coop, keeping hens while not permitted and slaughtering hens within the town limits. Those found mistreating their hens or violating the bylaw will be disqualified.

Heather Gillis, one of the Diamond Valley CLUCK members who brought the proposal for a pilot project to town council last winter, said she appreciates the Towns’ work in developing a pilot project. She said these pilot projects are occurring in communities across Canada.

“There is a big interest province-wide,” she said. “People are saying I want to start this in my community.”

Turner Valley Mayor Kelly Tuck, the only one from Turner Valley council to vote against the pilot project, said she doesn’t believe hens belong in town, but will stand by her council’s decision.

Black Diamond coun. Jackie Stickel and Judy Thomson voted against the project during second reading, but voted in favour for third reading, which allowed the project to proceed for Aug 1.

“They are a farm animal,” Tuck said. “They belong on a farm or an acreage, they do not belong in town.”

Despite her opposition to the project, Tuck is impressed with the regulations established by administration in both towns.

“The process itself is set out very structured from the time you apply for the chickens and set up the coops,” she said. “A lot of thought went into it from Black Diamond and Turner Valley staff.”

Gary said he is concerned about the smell and noise levels.

“The environment is terrible for me because I have allergies,” he said. “If you’re on the outskirts that’s up to you, but in town that’s a big negative as far as I can see. It’s a big negative for drawing other people (to Black Diamond) as well.”

Following the meeting, Ruth told the Western Wheel she is worried the hens will attract predators.

“Three years ago I had a badger in my yard,” she said. “Chickens and that type of smell would attract wildlife.”

Ruth also questioned how the coops would be cleaned with a water ban in place in both towns, as well as what will be done with chickens that are too old to lay eggs and where they will be slaughtered.

“That’s like trying to have a horse in your yard if you’ve got a big yard,” she said. “It just doesn’t make sense. You want those things, buy an acreage.”

She added residents having their own eggs will take business away from the local grocery store and farmers.

To learn how backyard hen pilot projects are faring in other communities, Black Diamond Coun. Ruth Goodwin connected with communities with projects in place and was one of five people to attend a coop tour in Red Deer. Goodwin said Red Deer participants didn’t have any issues with predators or their neighbours regarding their hens.

In speaking with one participant, Goodwin learned her neighbourhood was overrun by mice until she got hens.

After spending weeks studying backyard hen pilot projects in various communities, Goodwin is confident the project will be good for Diamond Valley.

“I’m really pleased that Black Diamond council, and Turner Valley of course, had decided to enter into this pilot project,” she said. “It’s very important for many reasons to allow people the opportunity to explore the option of not only growing your own food, but also raising your own food.”

Goodwin hopes those opposed to the pilot project will further educate themselves and read the Towns’ guidelines to quash concerns they have about the pilot project. The requirements will be posted on both towns’ websites by July 1.

Those interested in participating in the backyard hen pilot project must submit their applications to their town office between July 1 to 18. The registration fee is $50.