An award-winning artist isn’t afraid to push the boundaries or cross some borders.
0
Dec 8, 2018 6:00 AM By: Bruce Campbell 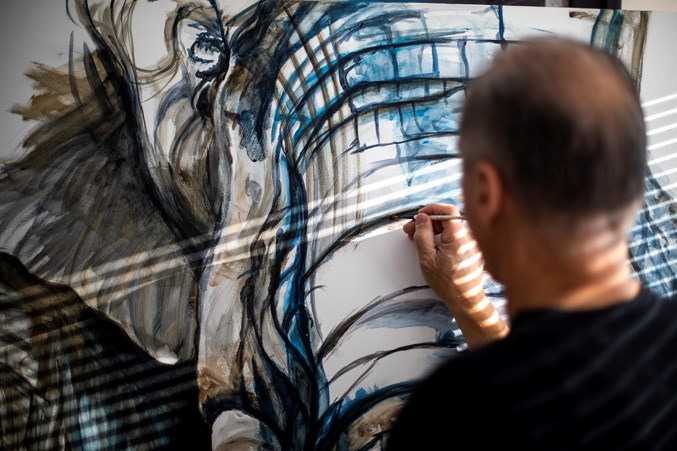 Wildlife artist David Kitler dabbles on work in progress of an elephant.

An award-winning artist isn’t afraid to push the boundaries or cross some borders. The last thing he wanted to be is part of an assembly line when it comes to his work — in fact it was an assembly line worker at a Toronto toothpaste factory that inspired David Kitler to follow his dreams and travel the world. “I saw a retirement notice for Peter and all he did every day was take cases and put them in a bigger case,” said Kitler, from his DeWinton studio. “Two weeks later I saw another notice saying he died after 20 years on the assembly line. “I told myself I don’t want to be like Peter. I want to see the world.” Now some of the world’s most magnificent animals, from squirrels in his Foothills area backyard to a crocodile from Botswana, are captured in his painting studio. What isn’t prevalent on his walls are the many awards Kitler has won — which include his Red-Lored Parrot receiving an award in International Artist Magazine Challenge "Wildlife" competition. He won four awards at the Artists for Conservation show in Vancouver, BC in 2016 for his painting Piece Keeper, a portrait of a Panamanian girl. Quite an achievement for an artist who came to professional life due to an unimaginable tragedy. His dream was to become a veterinarian, but when his mother was murdered in Ontario when Kitler was 17, he had to grow up fast and working at the toothpaste factory was the result. He worked in the factory and went to school at night, earning a degree with honour’s distinction from the Ontario College of Art. One of his first paid jobs was doing sketches of pets, wives, and family members for people at the factory, who had gotten to know Kitler’s work when he drew during breaks at work. He moved out to Alberta in the early 1990s and purchased his DeWinton property in the mid-2000s. His extensive travels began in earnest when he was the first member of the Artists for Conservation Foundation in 2005 to receive funds to study an animal of his choice if pictures and/or a journal is done for the foundation. “I said I know what animal I wanted to do and that’s the most powerful bird in the world, the Harpy eagle,” Kitler said. “When I arrived in Panama and it was my birthday, the guide leaned over the seat and said: ‘I have a birthday gift for you, I found a nest.'" Kitler wound up taking photos and studying the nest with chicks and the parents — including sloth bones from fresh kills. His paintings and sketches from the Harpy eagle experience went on to win several awards. Harpy Eagle - Talons, a painting of the magnificent bird of prey, has beneath it smaller paintings of animals – sloths, anteaters – that the Harpy considers for supper. “It’s tarsus is as thick as our wrists and the talon is used to sever the spine,” Kitler said. “It takes the kill and dispatches it – they are a lazy opportunistic hunter. They hear something and go down and get it.” He did several paintings of the Harpy’s nest over the years on return trips, watching the growth of the chicks. Some of his other paintings include a turtle skull in Costa Rica, frogs in the Amazon and spiders in Madagascar. “I just like all of those creatures,” he said. “I like to paint what I see in nature. I don’t like putting man-made objects in my paintings. You won’t see the blue jay on the water pump for example. “I try to keep man out of it. I am tired of how man has ruined some things. I want to go where I can’t see man’s influence. That is what has driven me. I have been to Africa, India, South America, travelling in the bush, mountains just to get away from man’s influence… I love to see the animals of the world, not just read about them. “That’s what I say about the paintings – I am bringing back my experiences from wherever I have been in the world.”

"I want to go where I can’t see man’s influence. That is what has driven me. I have been to Africa, India, South America, travelling in the bush, mountains just to get away from man’s influence."

While worried about mankind’s influence, he’s not afraid to assist his fellow woman and man. His trip to Panama established a long-standing bond with the villagers. “I’ve been back maybe four times and helped put in solar panels, bathrooms and helped to reinvest in the community,” Kitler said. His first trip he brought down tools for Panamanians’ passion – baseball equipment. But you don’t have to be the most powerful bird in the world to capture Kitler’s fancy. His pieces include paintings of robins or a squirrel and coyotes which he saw just outside his DeWinton studio. “I’ve seen moose go through my backyard, bear have been here, obviously coyotes because they are eating the voles and deer for sure,” he said. He has cameras placed strategically at his home to make sure he gets a picture — animals have a tendency not to pose. “You can’t do it from memory – if I ask you how many teeth did that cheetah have, there is no way you are going to remember,” he said with a laugh. From those photos, he would make a sketch. From those sketches he creates his paintings — however don’t expect them to be exactly like the photographs, he’s not a Xerox machine. “I would rather take that photograph and do something different — those three birds never flew together,” Kitler said of a painting of three brown pelicans from Costa Rica. “I might have seen them the same day, but I will adjust it to make it better.” Detail is crucial — the world is full of experts. “I was at a show and this guy was looking at one of my paintings,” Kitler said. “He said: ‘You even have the tree right. I can tell this a dogwood and it’s the right time of the year.’ He was an arbourist. “I’m thinking ‘Oh, I must paint being careful that every flower bud or whatever is accurate or there is going to be that person that says, ‘Oh that isn’t right.’ “I want to preserve what I have actually seen and educate through it.” An accurate painting means Kitler must get his passport stamped a lot. One of his favourite spots is a country now better known as an animated film. “Madagascar was a treat,” he said. “It contains a lot of stuff that is different— lemurs, chameleons, snakes, that kind of thing.” Although he’s hung around with cheetahs, snakes, spiders, and other scary stuff, he’s been frightened by only one animal – man. “Danger from people more than anything – I had a guy running after me with a machete, he was running away from the police with a bag of loot on his back,” Kitler said. “I had been taking pictures along the trail, but I haven’t had danger so much from the animals. “I had venomous snakes, 20 or 30, going through my legs one time while I was in Kenya. I had disturbed them in the mating ball.” A country still on his paint-bucket list is Borneo. There’s no timeline, trips to Africa with guides don’t come cheaply – neither does travelling to various shows which is part of an artists’ grind. So for the time being he’s content to paint from one of the most beautiful views in the world – looking out onto the fields from his studio north of Okotoks. “Winter is a great time for me to look out the window and watch what life is doing and still be painting,” he said. Kitler is also a teacher offering art classes in more traditional forms of subjects, landscapes, portraits and others. For information about Kitler’s artwork and his lessons go to davidkitler.com