One in a Million

Hitting the pavement on a motorcycle is about more than the rumble of the engine and rush of the wind, it’s a chance to showcase craftsmanship and personality.
May 30, 2019 9:25 AM By: Tammy Rollie 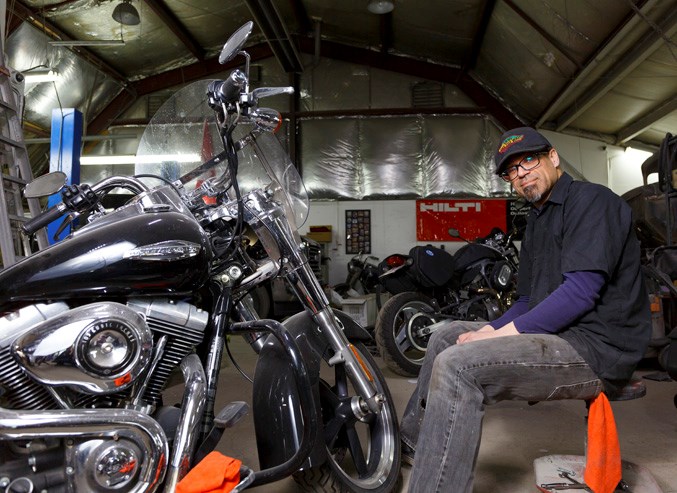 Hitting the pavement on a motorcycle is about more than the rumble of the engine and rush of the wind, it’s a chance to showcase craftsmanship and personality.

When Scott Maxwell cruises the highway on his 2009 Harley Davidson Road Glide, Willis, he knows there’s no bike on the road like it.

His three-quarters custom, one-quarter stock motorcycle boasts parts from around the world from saddle bags made in Germany to a frame manufactured in California. The bike features reverse shifters, Hayabusa tires and custom LED Halo lights that glow white when on and orange when signaling.

“It’s a one-off complete custom bike,” he said. “It’s the only one you’ll ever find that looks like it. I don’t even know what it’s worth.”

Maxwell had a vision for the bike the second he bought it.

“I built a replica of a police pursuit bike, except I made it twice as wide and superfast,” he said. “It’s a street legal racer. It looks just like Robocop’s motorcycle.”

As the proprietor of Clancy’s Hot Rod and Custom Shop in Okotoks, Maxwell has everything at his fingertips to transform bikes from one of thousands to one in a million.

He said most bikers like to make their rides their own, whether it’s aesthetics, mechanics or comfort.

“It’s definitely an extension of who you are,” he said. “It’s like getting a tattoo. It has no limit or boundary to it.”

For many bikers, it’s about personalizing the look and comfort.

“It’s those little things where you try to keep away from the mainstream,” he said. “You need those subtle little things that break you apart from everybody else.”

When it comes to aesthetics, some riders want flaming skulls amidst iridescent paint while others want a matte finish.

These details are applied delicately by Maxwell.

“It’s all technique like gun pressures and playing with the knobs on the gun,” he said. “I’m always willing to try different things. When you find something that works the best you run with it.”

For his own bike, Maxwell used flat black paint and applied red pinstriping. He fixed the front fairing so it doesn’t move with the handlebars and installed duo headlights and a low-cut windshield.

Most unique is the weight of Maxwell’s Harley.

“The only steel parts on this thing is the gas tank and the frame, maybe even the key,” he said. “Everything else is Fiberglas or aluminum. It’s super lightweight.”

Many riders not only want a bike that turns heads, but one that suits their riding style.

“It’s all about how it handles, how it sounds, the seat, the suspension,” he said. “People already have a lot of this grasped in their heads of what they want.”

Some riders insist on subwoofers and speakers, despite the added weight.

“Bling is big - they love it,” he said. “Some bikes we had to have appraised before they even leave the building.”

Maxwell, who’s been working on vehicles since his teen years, has become known in the Foothills and Calgary area for his expertise with motorcycles.

“My dad worked with vehicles and to keep me busy he gave me one of his derelict work vehicles when I was 13,” he said. “A year later he gave me a 1978 Yamaha IT 125 motorcycle. I didn’t know anything about motorcycles. I took it apart and fixed all the issues I found with it as I learned how to ride it.”

Maxwell’s been fixing and riding motorcycles ever since.

“This is all I ever wanted to do,” he said. “Motorcycles have always been a huge part of my life. I do it because it’s a passion.”

Maxwell became fluent at sourcing odd parts, even before opening his shop.

“People came to me for specialty work,” he said. “I do automobile work, too, but motorcycles is the one that gains the most attention. It’s what I’m most known for.”

Maxwell’s expertise has not gone unnoticed. His bikes have received awards at Calgary’s annual World of Wheels and draws plenty of attention while on display at bike shows.

“I get pleasure out of being the unknown artist,” he said. “I can stand in a crowd of people while they ogle something that I’ve built or painted and they don’t know it’s me. I’ve walked up to people talking about a bike I built and most will give me an up-and-down look and go, ‘You did this?’ I really enjoy that.”

“I can stand in a crowd of people while they ogle something that I’ve built or painted and they don’t know it’s me. I’ve walked up to people talking about a bike I built and most will give me an up-and-down look and go, ‘You did this?’ I really enjoy that.”

The 72-year-old mechanic owns five motorcycles ranging from a 1952 Panhead to a 2007 Russian Ural.

“I build them the way I want,” he said. “I’ve got parts everywhere. I wheel and deal with all kinds of guys.”

Oleinikow’s pride and joy is his baby blue Panhead - a two-cylinder, two-valve per-cylinder pushrod V-twin engine named so because the rocker cover resembles cooking parts. The Panhead replaced the knucklehead engine in 1948 and was manufactured until 1965 when it was replaced by the shovelhead.

“If you bought the bike in 1952 it would look exactly like this one without the signal lights,” he said. “This bike gets a lot of attention.”

“I like the old style engines,” he said. “With these old bikes, you can still work on them without using a computer.”

Yet it’s his 2007 camouflage Ural two-wheel drive army bike with sidecar that gains the most attention with its ammunition boxes, upsweep exhaust pipes and pogo seat.

“It’s great for winter,” he said. “I’ve driven it with a king-sized mattress on it. It’s my little truck.”

While five cruisers may seem like a lot, including his 1979 FLH Shovelhead that’s currently on a lift, Oleinikow said each one gets plenty of road time.

“I ride them all,” said Oleinikow, a regular attendee at the annual Sturgis Motorcycle Rally in South Dakota. “I enjoy my motorcycles. The first bike I bought at 14 years old I had to hide from my parents. I rode up and down the alley and hid it at a friend’s house.”

When Okotoks biker Jeff Crooks hits the road on his 2010 limited edition Harley Davidson CVO, he’s riding in comfort and style. He searched high and low, desperate to get his hands on the bike, as it was Harley Davidson’s first blacked-out edition.

“Harleys were quite known for their chrome and this was something totally different,” he said.
Unlike Maxwell and Oleinikow, Crooks put no effort into making his bike unique. He didn’t have to. Of the 999 made, only 54 came to Canada.

“I love the colour scheme,” he said, “The red flakes sparkle – it looks great in the sun. It has heated seats and hand grips, a stereo, speakers in the front and rear, and lots of storage for longer trips.”

The limited edition also boasts a 110ci engine, so he can pass and climb hills with ease. It’s also better on fuel, said Crooks.

Crooks cruises highways from New Orleans to Tofino, and is a regular at bike shows, rallies and show and shines – eager to admire the craftsmanship of other bikes.

“Everyone has different accessories to make it your own,” he said. “It's personal preference. Everyone wants to be unique.”

More than anything, Crooks enjoys the open road and the camaraderie.

“You meet a lot of great people,” he said. “Anywhere you go everybody checks everyone’s bikes out.”

Crooks’ first bike was a 2005 Night Train he purchased from a friend – a deal that was too good to pass up.

“That gave me the itch to do more than just short trips,” he said. “Riding is a huge stress relief at the end of the day and there’s not many feelings like it, whether you’re with your spouse, a group of people or by yourself.”