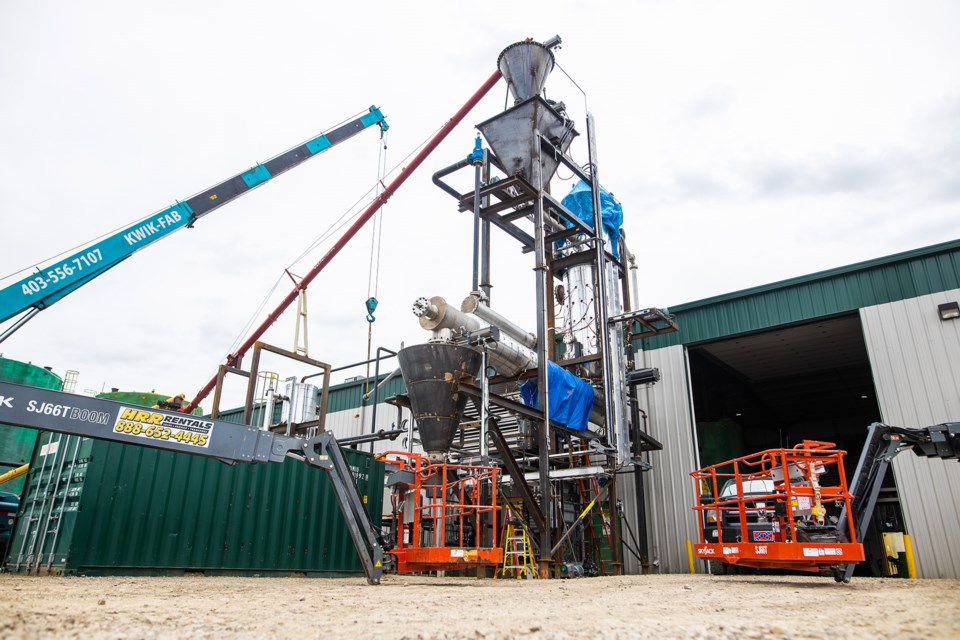 Landfill refuse could be the billion-dollar ticket for an entrepreneur determined to create the greenest corporation in the world.

The first commercial demonstration facility is set up in Aldersyde.

“This is a unique process, nobody else in the world has done this, we’re the first,” said Allan. “We’ll be a billion-dollar company in the next few years, I strongly believe. We’ve got an opportunity to make a major impact.”

It all began for Allan in 2009 when he discovered a technology out of Germany that uses waste, also known as feedstock, to make low-grade diesel fuel.

Allan, who has a background in mechanical engineering with 35 years of experience as an entrepreneur, spent two years working with the German company before buying the pilot facility they had been operating.

In 2013, Allan moved the facility to Red Deer and for four years ran a pilot project to create a higher-grade diesel fuel.

“We tried to figure out what feedstocks we could use – as well as temperatures and blending rations - to make diesel,” he said.

In 2017, Allan bought the Western Biodiesel plant in Aldersyde and transformed it into a commercial facility that blends waste materials with used motor oil and a chemical catalyst to produce naphtha fuel (a condensate or diluent used for thinning out heavy oil), kerosene (used as a jet and marine diesel fuel) and highway grade diesel.

“This plant will probably always be a research and development plant – a large-scale pilot plant,” said Allan. “There’s a lot of learning to be done here. We will work on different types of feedstocks and do some upgrades.”

The facility is currently liquefying waste wood products from a sawmill in Sundre after securing a permit to do so last summer.

Allan and his staff are working to obtain more permits for multiple feedstocks, like plastics, to create more high-grade renewable diesel.

They’re hoping to change policies against using plastics in the blend for transportation-grade diesel after approaching provincial and federal regulators to revise the current rules.

“Our goal is to eliminate the requirement for a landfill,” said Allan. “They contribute up to
25 per cent of greenhouse gases and extrude methane.”

The only materials the refineries can’t liquefy is metal, glass, rock and dirt, said Allan.

“If you can burn it or liquefy it we can take it,” he said. “We believe we are the only company in the world that can make that statement.”

The Aldersyde plant will have the capacity to liquefy 33,000 tons of waste a year, which creates 2,000 litres of diesel fuel an hour, said Allan. Production is currently between 3 and 100 litres an hour. Allan is hopeful they can reach 1,000 litres within the next six months.

“The average person in Canada produces about 1,000 kilograms a year of garbage,” he said. “That is enough for 70 scaled-up 4,000 litre per hour facilities at approximately $50 million per facility, or $3.5 billion in investment, for just waste in landfills.”

The company is already collaborating with recycling companies to secure products with a lacking market and have them delivered to Aldersyde.

“We need somebody that can grind it down to our specifications, bring it in by trailer and we take it from there,” he said. “We want to get it before it goes to the landfill.”

Allan said he and his team are also pursuing the idea of liquefying dry chalk sewage blocks into high-grade diesel fuel.

“That’s a whole new industry for us,” he said. “Right now you see sewage being dumped in the rivers and oceans.”

“Today the market for highway renewable diesel is about 665 million litres in Canada and it’s imported from Singapore, Finland and Brazil,” he said. “We make a diesel that has higher cetane levels – the difference between regular and premium – and we are not using agriculture food crops to meet this demand.”

Allan said high-grade diesel is becoming well sought after around the globe.

“Everybody wants to go better and greener,” he said. “Right now there’s no mandate for jet diesel, yet everyone wants higher blends in jet diesel. All the airline companies are looking to blend, even though they’re not mandated to do so.”

“Even the oil industry is trying to blend their off-highway diesel at the rigs to show shareholders that they’re doing something that’s greener,” he said. “We foresee it could be a huge market. Renewable diesel is the second fastest growing industry.”

Allan said Cielo Waste Solutions aims to build or at least have 40 facilities in the queue throughout North America over the next five years.

“We’ve got the next five sites already selected with Halifax processing plastics and wastes,” he said. “We’re hoping to take over some of the
Asian market for plastics and help clean up the oceans.”

In Alberta, plans are in the works for refineries in Medicine Hat, Lethbridge, Calgary and Grande Prairie.

Allan said the hype for the green refineries is growing as word gets out.

“In the last six months people from around the world want to get in line,” he said. “We have a strong buyer market. The opportunity in front of us is huge. We’re being approached by nearly every country in the world - it’s pretty exciting times.”

Each plant will employ 25 to 30 employees with spin-off opportunities as the company will need to contract work for trucking, grinding and transporting waste streams, said Allan.

Construction of the refineries alone will employ another 60 to 100 people per facility, he said.

Allan even envisions refineries in war-torn areas through deployment with USA and Canadian armed forces.

“The USA army in Iraq has to send its garbage back to be landfilled in the states and one of the most unsafe places in a war zone is purchasing diesel for operations.” he said. “We can make a unit so they can make fuel with garbage.”

Cielo Waste Solutions could also put an end to waste being dumped off of navy ships into the ocean, Allan said.

“The navy puts it in drums and throws it overboard,” he said. “We’re saying, ‘We’ll take that garbage and put it back on your boat.’ The possibilities are never ending.”

In addition to turning waste into fuel, Cielo Waste Solutions is also going green in its operations.

By liquefying the waste, Allan said nothing is burned and therefore no harmful emissions are released into the atmosphere.

The facilities currently run off electricity, yet the company is looking to go to the next level and is negotiating a contract for solar and wind power, said Allan.

“The only thing that has emissions at the Aldersyde plant is one boiler, which is a small footprint,” he said. “By the end of the year we’ll be fully green powered except for the boiler. We won’t have boilers at the other facilities.”

Allan said it’s all a part of Cielo’s initiative to be the greenest facility in the world.

“That’s the key is for us to have no harmful emissions so we don’t burn anything, we liquefy things,” he said. “It stays inside the process and turns into diesel.”

The Aldersyde plant currently has an eight per cent waste stream consisting of ash, which Allan said is high in nitrates. Cielo Waste Solutions is hoping to sell it as a fertilizer come spring, he said.

“We’re self-sufficient,” he said. “We don’t need natural gas. All we need is power and soon that will be green power.”