“I’m definitely nervous because I’ve relied very heavily on the teachers there and my friends and whatnot. So to go from having eight people in my class to possibly having 200 is going to be a major change."
Jul 6, 2020 10:00 AM By: Remy Greer 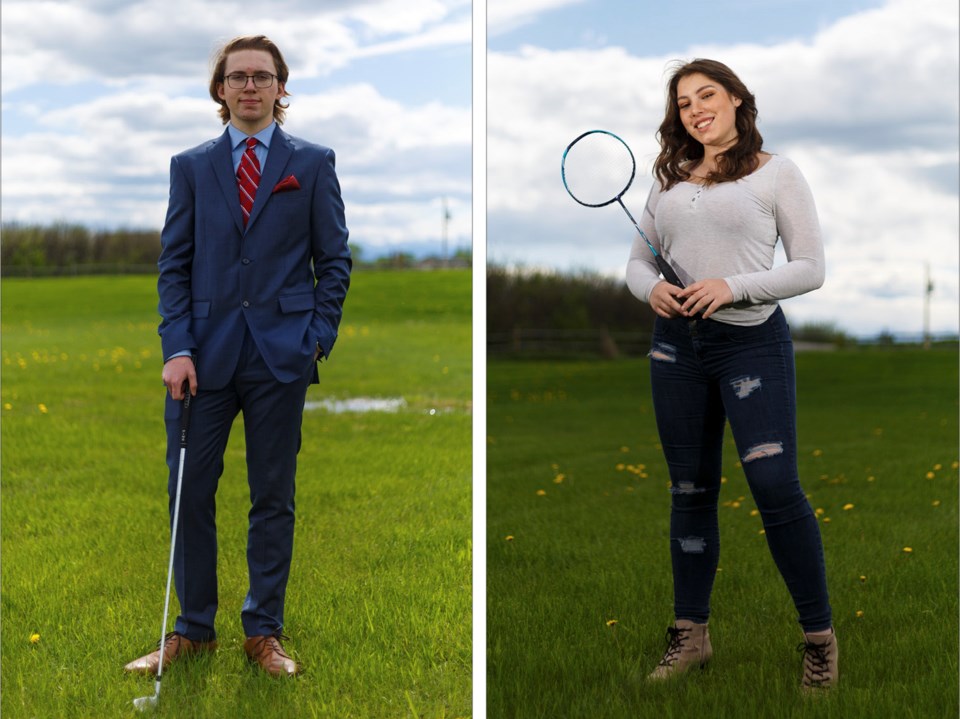 Left: Okotoks’ Owen Martin is headed to the University of Waterloo in 2020-21. Right: Edison School’s Taylor Burton is one of eight members of the graduating class of 2020. (Photos by Devon Langille)

When going through an unprecedented challenge such as the COVID-19 pandemic it helps to have a tremendously tight group of seven other graduates to lean on at Okotoks’ Edison School.

“From my understanding, our school is a lot different than others, because it is a private school, we pay more to go there,” said graduate Taylor Burton, from Okotoks. “So we actually have scheduled classes where we call in and we get a lot of homework compared to the other schools, from what I’ve heard from friends.”

The transition to virtual learning still made for long hours for Edison students.

The virtual learning still took place in a small-class setting with no more than 12 students in a class, Burton said.

Getting the one-on-one attention the students are used to at the small private school in an online setting can have its challenges.

“It’s more difficult to ask questions or get demonstrations for things,” Burton said. “And it’s a lot more teaching yourself which has been kind of tough, especially with being a small class we rely pretty heavily on our teacher to explain things to us. It has been more difficult to adapt to.”

As someone with ADHD, Burton said being out of the classroom was not ideal for her learning.

“The process of actually going to school and being forced to sit in a classroom and listen is a lot easier than at home when there’s so many distractions,” she said. “I just don’t have the motivation to do the work.

“We’ve been with the same people since Grade 6 so we’re very close. We all have one big group chat where we discuss things going on and go through everything together.”

Burton switched to Edison midway through her Grade 6 year and the different learning opportunities were a major reason for the move.

“I did have some difficulties learning so to be in a class where a teacher is right there to say ‘hey, you need to focus,’ or if you need help it’s so easy,” she said. “I used to go to Percy Pegler and I would have my hand up all class and now I get answered right away.

“I loved it, there were some times I wished I went to a bigger school because then there would be more people to interact with,” she said. “But I’ve built such close relationships, the teachers, the principal (Billy Gilliland), we are so close and they care for us so much there.

“It’s such a community.”

COVID-19 didn’t only impact her Grade 12 year, but her post-graduate plans as well.

Originally, she planned to attend the University of Lethbridge in the fall for its business marketing and management program.

“But then I found out the classes are online and there’s a possibility that one or two classes could still be going on,” she said. “I didn’t want to move all the way down there for one class so I might take a gap year and take a small course on stock broking and stock trading.

“The course is all about day trading so if I get good at that I will definitely consider a career in that, but I would still like to get some form of degree or diploma. I’d like to get my business degree.”

Graduate Owen Martin joined Edison near the end of his Grade 8 year and called the school absolutely amazing.

“The environment there and the fact that everyone is so competitive in terms of the learning aspect of everything and in terms of the sports that we play – mainly badminton — it’s just everybody is pushing each other to get better and better,” he said. “It really helps that the teachers actually post national contests around, math contests, computer science contests everybody is signing up for them.

“That really helps feed the competitive nature of the school and overall I think that just helps everyone learn better. Not only are you competing with the person next to you, who’s also your friend, but also you’re competing with thousands of other students across Canada. You’re going to be vying for the same application spots for universities that you want to go to.”

Martin planted his flag on one of the technology hot-spots of Canada, in southwestern Ontario’s Tri-Cities area, at the University of Waterloo. The Okotokian was accepted into the school’s honours mathematics program and will be majoring in data science. His career path should follow into data management, software engineering or computer programming.

“Their first semester is going to be online, which will be a little bit interesting, so I don’t think I will be going out to (residence), but I’m not sure on that,” he said. “All of their classes, the majority of them are going to be offered online, it’s just going to be a few specialized classes in upper years that you have to show up in person for.”

Waterloo is one of the top technology schools in the country.

“I’ve always wanted to be a programmer or working with computers and Waterloo has by far the best computer science program in Canada,” Martin said. “Just with their rankings, their reputation, their research opportunities, all of that. And they also have some of the best professors in Canada as well — for computer science and mathematics."

Highlights during Martin’s four-plus years at Edison include the annual overnight canoe trip to kickoff the school year. The trip has the students bus out, set up tents every night, cook their own meals and do their own shopping.

“It’s always a blast and a great way to start the year just because, for me in Grade 9, I was still relatively new, and that was the first time I did the canoe trip,” he said. “It’s just a great way to get to know all of your classmates at the start of the year. It’s not like you’re just dropped into a classroom and you start to learn right away.

“I think that’s a really great way to approach the start of the year, it gets you back into it.”

The graduating class developed into a tremendously close group.

“We have a lot of group chats outside of school that we’re always talking in and we play a bunch of games together,” he said. “It’s really helpful to always have a solid seven other people that you can always be ‘like, what did we have for homework yesterday because I wasn’t there.’ And they will always be there for you in order to make sure you don’t fall behind.

As a Grade 10 student, Martin teamed up with classmate Chloe Crump and placed first in Western Canada in the Junior Achievement investment strategies program, earning $81,000 over the six-week period with their investments.

The program had 2,000 teams of students from across the prairies and western Ontario invest $100,000 in virtual money in an online simulation.

“That was definitely a fun contest that we participated in,” Martin said. “We made just under double our money in that investment.”

Edison was able to hold a small outdoor grad ceremony, featuring just the eight graduates and their families with some of the school staff on hand as well.

“Grad’s always a nice thing to have and it helps you close the chapter of high school and move on,” Martin said.

The school will be a difficult place to move on from.

“I’m definitely nervous because I’ve relied very heavily on the teachers there and my friends and whatnot,” Burton added. “So to go from having eight people in my class to possibly having 200 is going to be a major change.

“But I’m excited because I believe Edison has prepared me in a lot of ways for doing well in at least the school work portion of university.”

“She’s been such a major influence,” Burton said. “I can definitely say I would not graduate if it wasn’t for her.”

Some of the graduate’s best memories as an Eagle include starring on the stage and on the hard-court. Burton was one of the lead roles as the Cowardly Lion in the school’s production of the Wizard of Oz.

It’s a team effort, from the senior students in particular, from set design, line memorization to making the younger students feel comfortable.

“We have an annual high school play,” she said. “And it’s mandatory for everyone to participate and that’s always been so much fun – it’s a huge community thing for us.”

The same can be said for Edison’s best-known activity — badminton.

And with a principal who is a world medallist in the sport you can understand where the passion comes from.

“Badminton has been super important for me, I played outside of the school and played at provincial tournaments and whatnot with the Alberta Series. It’s been very influential for me mainly because it’s really helped build friendships and connections going to tournaments with different people,” said Burton, who helped Edison to its ninth straight 1A provincial banner in 2019. “Some of the closest relationships at Edison are through badminton.”