OKOTOKIAN: One Meal at a Time

Words by Megan Thrall, Pictures by Brent Calver Walking into the house, I’m immediately invited to sit at the kitchen table and chat.
Jun 9, 2019 10:00 AM By: Megan Thrall 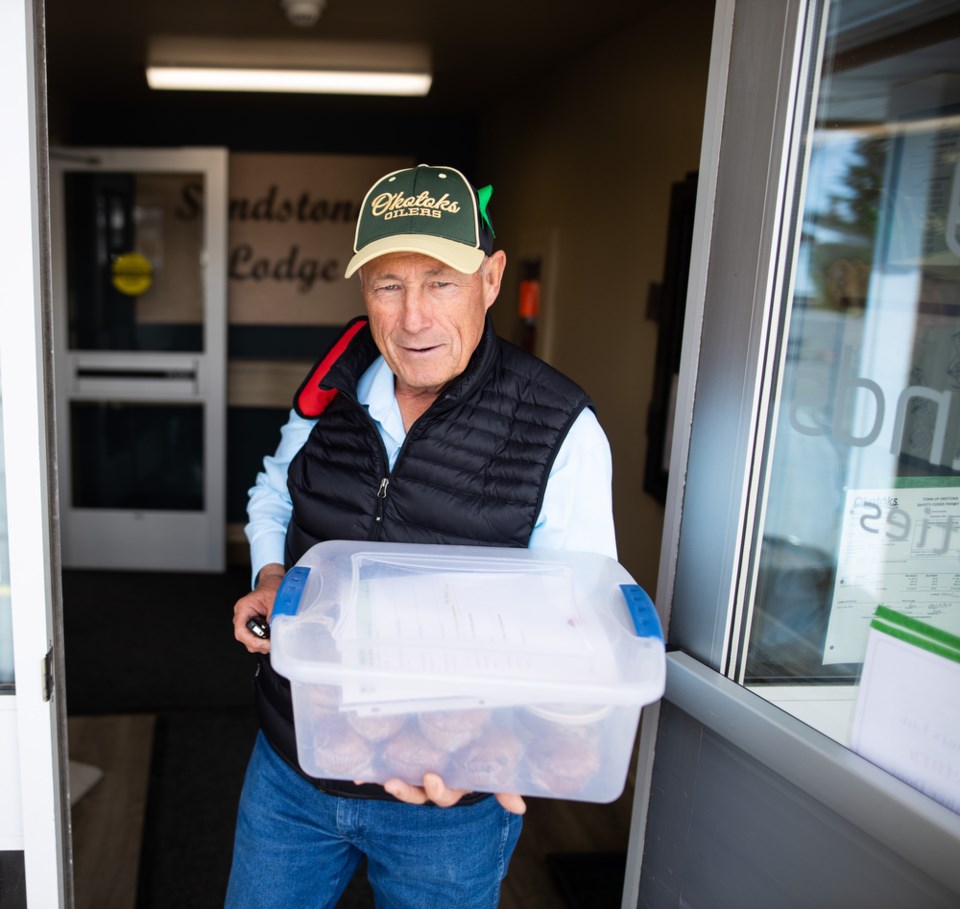 Walking into the house, I’m immediately invited to sit at the kitchen table and chat. The gentleman I’m visiting, who asked to remain anonymous, shows me the pictures on the walls as we pass through the sitting room. He told me about each family member in the pictures, and about where they are now, where they have been, and when he last saw them.

The reason I’m there is to talk about his experience with the Meals on Wheels service in Okotoks, which he has received since his wife moved into a nursing home a few years ago. Meals on Wheels had seen a decrease in their orders over the past few years, and had asked me to cover their service.

On my way to his house however, I learned from those involved in the service that loneliness was far more prevalent in the meal delivery system than I had expected.

Loneliness is not as clear-cut as those who have friends or family that stay in touch aren’t lonely and those who don’t have adequate social interaction are. It is in fact a much more subjective experience, and one that is increasingly becoming a medical concern.

The loneliness epidemic has recently dominated areas of mental health research and discussion, as rates have increased by over 50 per cent in the last 50 years. Yet the epidemic has shown no evidence of diminishing.

Even worse, our most vulnerable group is also the cohort most commonly known for saying nothing of their struggle. For the elderly population, feeling like a burden often outweighs the need for social interaction.

For Okotoks Meals on Wheels, filling this need is a happy, value-added piece to the primary goal: providing hot, fresh-cooked meals to the elderly.

“What we offer is a smile, a greeting, a validation for people,” said Luella Wojcik, co-founder of the Okotoks Meals on Wheels program. “They’re still a member of the community, they’re not completely isolated. For many of our Meals on Wheels recipients, this becomes a very important part of their day, when they greet the Meals on Wheels driver at the door.”

The validation goes both ways, as the drivers experience equal socialization from the interactions.

“The reason they stay on as a volunteer driver for so long is the appreciation of the people at the door,” she said. “They have an immediate, first-line contact with the people receiving the service, and the immediacy of the feedback is the hook that keeps them there.”

The social contact of the service is one of the main selling features, said Wojcik.

Referring to the pilot study by the English government to tackle the loneliness epidemic among the elderly population through social interactions with postmen and women, Wojcik aims to make the Okotoks service a way to combat the issue within the community.

The study was prompted by the UK’s government-wide strategy to tackle loneliness, which aimed to highlight the existing research on loneliness that paints a grim picture, while looking for ways to combat the problem.

Additional research done in the UK, with data from almost 500,000 people, found that social isolation and loneliness put people at increased risk of heart disease, stroke and an increased rate of death—results that frame the issue as a physical risk, not just emotional.

While young people aged 18-22 have statistically shown the highest rates of loneliness according to an American study released in the spring of 2018, the epidemic does not discriminate based on age. With results such as nearly half of Americans reporting feeling lonely some or all of the time, and one in four rarely or never feeling understood, the study found the rates of loneliness to be of epidemic levels.

While loneliness and social isolation do not necessarily mean the same thing—a person could feel lonely surrounded by people, or similarly a person could be completely alone but not lonely—the impact of the feeling of loneliness has a marked affect on the wellness of a person, both mentally and physically.

Teaching children and adults about healthy peer relationships and communication can help to mitigate the epidemic according to research. These interventions, however, don’t always come in time for the elderly, who are most at-risk of loneliness due to mobility challenges and decreasing social networks, according to the study.

That’s where targeted services come in.

“(The postal worker pilot study) saw a decrease in depression, more of a sense of community, and appreciation, that somebody cared about them,” said Wojcik. “The pilot study showed that there was a great benefit to even this minimal contact from the postmen, and this is what, in a way, Meals on Wheels replicates for recipients.”

For them, the service allows them to connect with elderly persons in the area that might not have much opportunity for socialization, said Stan. While the number of deliveries can vary as people move into lodges or pass on, the appreciation they receive at the door stays the same.

Dawn has been a Meals on Wheels driver for almost 40 years, originally in Ontario before moving to Calgary. Once the two moved to Okotoks, they both began driving for the service.

“You can say ‘Oh, you know, I don’t feel like going out’ on a day when it’s cold or blowing, but then the people come to the door and they’re so thankful and appreciative that it makes you feel good,” said Dawn.

For the two of them, loneliness is a major factor for recipients of the Meals.

“Sometimes that’s probably the only contact they have had for several days,” she said.

“(Some of them) would talk for half an hour if I stayed there. Sometimes five minutes, sometimes 10 minutes, sometimes two depending on the circumstances. But then on the other hand, sometimes they can be a bit resentful that you have to go on to the next place, though they understand the program.”

While the delivery schedule is split between all of the drivers, each driver has their regulars, which allows them to build relationships with the meal recipients.

Walking into the gentleman’s home, it became immediately clear he wasn’t interested in talking about the meals he gets delivered, though he did say they were quite good.

Though twice the ringing phone interrupted our chat—his children, who live out of province, check in daily—he was reluctant to let the conversation dwindle. What he really wanted to talk about, and we spent more than an hour doing so, was his family and his woodworking.

When we finished talking about his life, which included tales of serving in the military, we talked about the squirrels and birds that visited his backyard. When that conversation reached its natural end, we moved on to his table: He made it himself.

From there, he showed me his workshop in his garage, where he makes furniture for himself as well as friends and family. Heading back to the kitchen through the living room, he shows me more pictures. This time, he focuses on his grandson, who joined the military. The pride showed on his face, and he spent another several minutes telling me about his grandchildren and what they have accomplished.

Looking spry for being over 80 years old, he doesn’t seem like a lonely man, though he lives alone. His children call daily, and one stays with him while in town. His willingness to accept me into his home, tell me his life story and ask me to visit again, however, suggested that perhaps he feels lonely regardless.

For the Parkers, the gentleman I met with was one of their regulars. They spoke fondly of him, and his ability to “talk your ear off.” Standing in the doorway of his home with the Parkers, the conversation was that of friends talking about the local wildlife and the imminent weather.

The meal we were delivering was an afterthought; just a happy bonus to a social visit.