OKOTOKIAN: Holiday from the Heart

The spring break holiday went beyond laying on a beach, catching some rays and getting a tan for 40 Okotoks high school students who were Central America bound.
0
Jun 2, 2019 1:29 PM By: Bruce Campbell 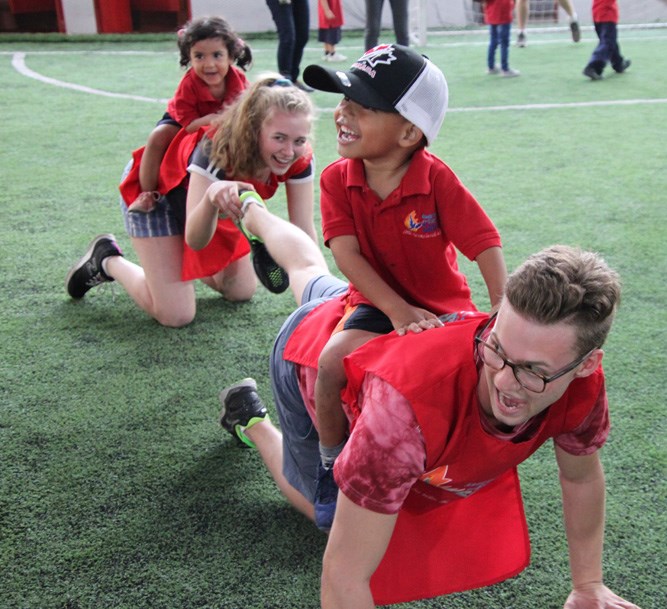 The spring break holiday went beyond laying on a beach, catching some rays and getting a tan for 40 Okotoks high school students who were Central America bound.

For one of those Holy Trinity Academy students, her six-day trip to Cristo Rey, Costa Rica during Easter left a different feeling in her chest.

“On this trip I learned to live with an open heart because I saw kids and individuals doing that,” said Grade 12 student Emilia Potapczuk, a Priddis resident. “I struggled before, I would be more reserved and kept to myself.

“Once I saw love come from the kids so effortlessly, it was just second nature and natural. It made my heart beat differently and it made me feel more whole.”

The students were on the 13th annual HTA Mission Costa Rica trip to Cristo Rey, arguably the poorest neighbourhood in San Jose, the capital of Costa Rica. The students – and six staff members – volunteered at The Works of the Holy Spirit Association.

It was the second consecutive year Grade 12 student Andrew Foley went on the trip.

“It was an eye-opening experience,” Foley said. “After last year, I realized we all have a responsibility of helping the citizens of the global community as best we can.”

It’s meant to be an eye-opener.

The trip’s founder, teacher Les “Mr. G” Giraudier, doesn’t give too many details about Cristo Rey and the association.

“I keep them in the dark, that’s part of my MO,” Giraudier said with a smile. “I want it to be something that hits them hard. It has always worked well.”

The association’s grounds are on an oasis amid poverty-stricken Cristo Rey.

“There’s a church, an orphanage, a daycare, a cafeteria for free food for poor people, a park with a petting zoo with monkeys, toucans, farm animals, a small pool and even some Ferris wheels,” Foley explained. “Father Sergio built this association as a symbol of peace for the area. It used to be very gang-ridden.

“And he brought in these amazing things to offer to the kids.”

However, such facilities need plenty of upkeep and TLC on a shoestring budget.

Father Sergio and Mr. G have a touch of Tom Sawyer charm. While thousand of tourists were slapping on suntan lotion, they convinced the HTA crew to slap down some coats of paint on the association’s grounds.

“We did a lot of renovation work, a lot of painting and repainting, so the association looked nice,” Foley said. “That took up a lot of the trip. Lots of corrals to paint because there are a lot of animals. There’s even an alligator – he’s not part of the petting zoo.”

They had to be careful not to get paint on the residents of the Cristo Rey community.

“In that culture, they like to give hugs – that first day there I must have gotten a hundred hugs, probably more,” Potapczuk said with a laugh.

The students spent plenty of time with the residents of Cristo Rey, no deep social psychological work, just hanging out, sharing a few giggles.

“We also hung out with the elders,” said Grade 12 student Beatrice Saluya. “They love to dance and they also like colouring, and we brought a lot of colouring books. We met a couple that were like 96 years old and had been together for 60-something-or-so years.

“It made me happy seeing them so happy.”

The love shown at the orphanage was epitomized by Maria Jesus, a baby born without legs and only one arm.

“This baby girl was left behind because her parents didn’t want to deal with her,” Foley said. “Then you see all these people who see her for the beautiful person she is. How loved she is.

“She went from parents who didn’t even want her, to all of a sudden this priest who took her in and said: ‘She’s perfect.’

“You see the happiness that Father Sergio has in his eyes just being in the presence of this girl.”

A few cookies epitomized the love, said Foley about his first trip to Costa Rica in 2018.

He was among the HTA students handing out Oreo cookies to children down by a river near Cristo Rey.

“These people were sleeping in small metal shacks and they slept on cardboard, so we gave them the Oreo boxes,” Foley said. “To make sure this little boy, he was about eight years old, didn’t just get the box I left a small pack with three Oreos. After I gave it to him, in that moment I was holding nothing.

“When he saw he had more than I had, he offered me the Oreos.

“How does an eight-year-old boy learn to be so selfless?”

“She went from parents who didn’t even want her, to all of a sudden this priest who took her in and said: ‘She’s perfect.’”

The HTA students earned their way to Costa Rica through bottle drives and fundraising efforts. They raised a whole lot more than just a return trip to San Jose. The students were able to donate $23,000 to the Costa Rican association to go along with giving Santa-Claus like bags of toys and a couple of guitars.

Giraudier estimates HTA’s field trips have raised more than $200,000 for the association over the past 13 years.

HTA staff and students have earned the love of Father Sergio and the Cristo Rey community. Giraudier calls the association his second-home.

Giraudier said over the years several HTA grads have gone back to volunteer at the association after going on their initial trip.

“I always think of it as this beautiful collision between Okotoks and Cristo Rey, Costa Rica,” Giraudier said. “It has become something so massive. I look at the amount of lives that have been changed in this community and that community.

“The kids that grow up in the Okotoks community have this absolute spiritual explosion, just experiencing something they have never done before.”

For more information about the association go to obrasdelespiritusanto.org