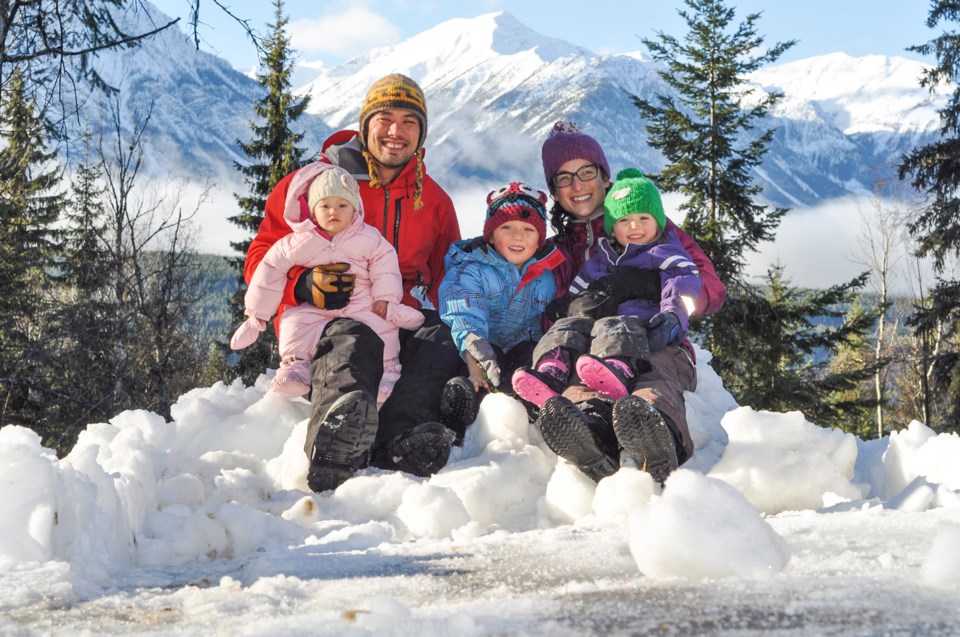 A young leader in Okotoks some 24 years ago is helping keep folks healthy in a busy, scenic British Columbia community along the Trans-Canada Highway.

Tanis Veale was selected the first Okotoks Rotary Club Leader of Tomorrow recipient in 1996 in the high school division for her work at Foothills Composite High School and the community.

“It was pretty exciting to get that award — a bit of a surprise,” the now Tanis Brown said. “Back then you have all your hopes and excitements for the future.

“It meant a lot. It was a special honour — I felt a bit of pressure after that, but it was exciting to know that hopefully the things I would do in the future would make a difference and maybe be an inspiration to other people.”

The Leaders of Tomorrow celebrates its 25th anniversary this year. The April 22 event date was postponed indefinitely due to the COVID-19 pandemic.
It is an effort to celebrate the achievements of youth in Okotoks and area.

The first Leader of Tomorrow is now a registered nurse in Golden, B.C. at a hospital with less than 20 beds.

“As a rural nurse, we do a little bit of everything,” Brown said. “I work emergency, we do have an obstetrical unit and an acute care unit — whatever comes through our door we get to deal with.

“We are busy here — we are on the Trans-Canada Highway, we have got the ski hills and the Kicking Horse river, so that all brings in a few people.”

Brown was recognized as a Leader of Tomorrow for her community involvement back in the 1990s — including an effort that went beyond the Alberta border as she worked to keep Canada together.

She was in La Belle Province to show her support to keep Canada together during the Québec Referendum in 1995.

“I had never gone to any political event like that before,” Brown said. “I had done a student exchange just outside of Montreal for a few months.

“I loved Québec, I loved that experience.  Young people showing their passion — what we could do to keep our country together and show that we wanted to support that movement to keep everyone together and let’s work it out.

“It was a big deal to just go out there and show that support. It’s exciting to know you can make a difference when you are young.”

(It was close —Québec voted 50.58 per cent “No” to becoming its own sovereign state.)

She had plenty of leadership skills while attending high school in Okotoks. The Foothills Composite graduate was on student council while at the Comp. She also was the chair for the graduation celebration for the class of ’96 — back when Dave Jones was mayor of Okotoks and Jean Chrétien was Canada’s prime minister.

“Back then I liked organizing and I liked celebrating big events – and making big happenings,” Brown said.

She grew up east of Aldersyde near Leduc’s Lynnwood Ranch and was an avid member of the Gladys Beef and Gladys-Blackie 4-Heartwarmers — something that provides some highs and lows for a young girl growing up in the Foothills.

“I have good and bad memories of 4-H — I remember being dragged around the ring by a 900-pound animal,” Brown said. “I was a bit of procrastinator and I never trained my animals very well.

“4-H helped me with my public skills and the life skills we learned — and the reality that I couldn’t be a rancher. It seemed to always cost me more to raise the animal than what I got back when I sold it.”

She was also a member of the Millarville Gymnastics Club.

It was an active lifestyle, which prepared her well for her studies at the University of Saskatchewan. She graduated as an RN and eventually came back to where her life actually started.

“I have a real soft spot for High River — I was born in High River,” Brown said. “When I went to university, my first practicum and then my first job was at High River Hospital.

“All those nurses taught me — they had so much wisdom and knowledge, they really set my foundation for nursing. They were always the pedestal I set for any of my work in the future.

“When I moved to Golden, I felt that similar connection with the nurses that I had in High River.”

Some of her mentors from High River include Paula Steel, Betty Clark, Kim Ellsworth and others.

She also worked closely with doctors Keith Spackman, Adam Vyse, Ron Gorsche and Chris Powell — a group that would have delivered several Okotoks babies over the years.

As for advice for the future Leaders of Tomorrow? That would be to love the community you grew up in like she did, but get out there and explore the world as well.

“I did a lot of travelling – mostly around Europe,” Brown said. “I worked in England, Ireland and Switzerland as a nurse.

“I was pretty young when I graduated (21), so I had some jobs as a nurse and others where I worked in pubs… I intermittently would come back to High River as my base station (to work).”

Her most adventurous experience  – sailing across the wild blue yonder.

“I hopped on a catamaran sailboat and travelled across the Atlantic and kind of sailed around the Caribbean for a while – I definitely had the travel bug when I graduated,” Brown said. “I feel that really created who I am today.

“I feel I am a much more open person and tolerant of the different cultures in the world.

“It’s exciting for me to learn about everybody – the whole world needs that direction of being tolerant of others.

“Okotoks is a great town to grow up in but there is so much out there.”

After those whirlwind trips she ultimately wound up Golden, but she has an important part of the Foothills with her always.

Her husband is Colin Brown who grew up in Priddis. The Browns have three children.