OKOTOKIAN: A crossing along the educational journey

“I was ready to quit school. To graduate makes me feel 10 times better about myself. I realized I could accomplish things once I sat down and did it.”
Jul 5, 2020 10:00 AM By: Bruce Campbell 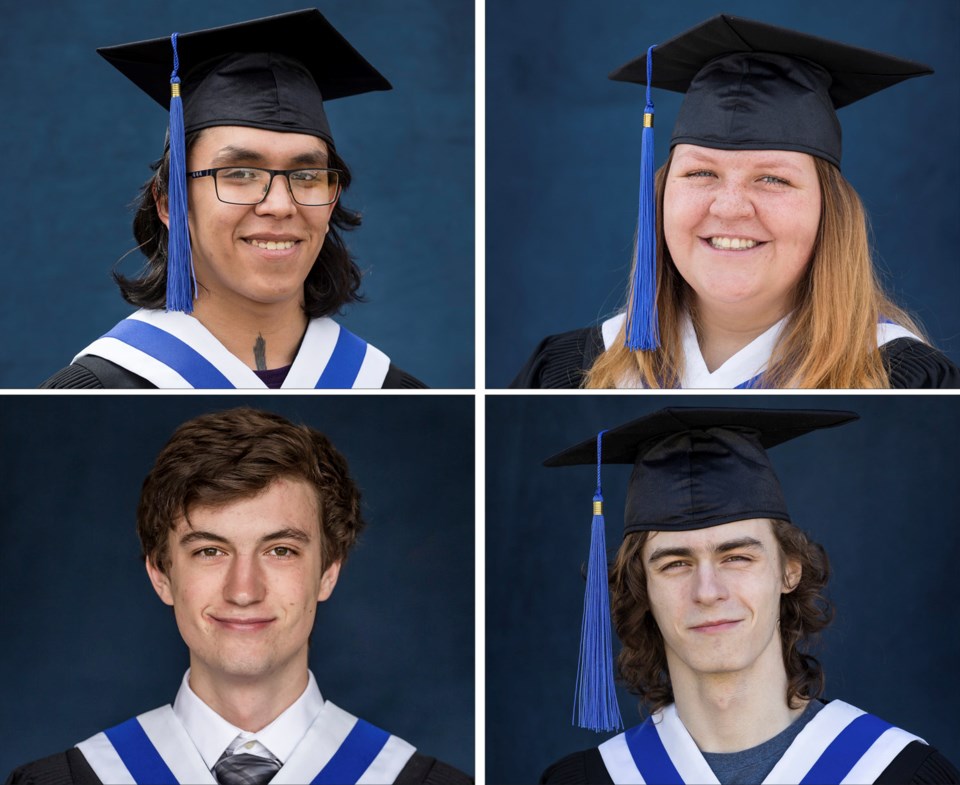 Take a look at an Okotoks history book and it will tell you Cameron Crossing was a stopping house on the north side of the Sheep River to help travellers get on with their journey in the late 1880s.

Nearly 140 years later, a school bearing the stopping house’s name is helping young men and women complete their high school journey.
“I feel great about graduating,” said Charlee Jerrett, one of four members of the Cameron Crossing School Class of 2020. “It is sad how it ended what with this COVID-19, but I am glad to be where I am… Cameron Crossing is like a second family to me.”

Cameron Crossing School is an alternative school, often for those students who have trouble fitting into the traditional school setting. The school is located along the Sheep River in Okotoks – a quick walk east from the original stopping house.

Jerrett struggled in a traditional school and it escalated – she was on the cusp of dropping out or being suspended in Grade 11, said her mother Sandra.

“The classrooms were too big, although they were trying to assist her it wasn’t enough,” Sandra said. “Cameron Crossing offered her a spot and she went from failing every class to excelling with over 75 per cent in every class.”

Charlee said she had trouble concentrating at the larger school. The greater one-on-one attention helped her achieve her diploma.

“I was ready to quit school,” Charlee said. “To graduate makes me feel 10 times better about myself. I realized I could accomplish things once I sat down and did it.”

It’s been a life-changer at home.

“I was struggling to keep her in school,” Sandra said. “To see my child crying every morning because she didn’t want to go to school to now she’s disappointed that she is not going back to school.

“The feeling in my heart for the staff at Cameron school is huge.”

Cameron Crossing principal Jeff Mason took a similar path to the school. He had been an administrator at the biggest schools in Foothills School Division before taking the principalship at the school about 2 ½ years ago.

“Traditional school systems can create so many structures that some of our students have difficulty being able to show their true talents in,” Mason said. “We’re providing an opportunity to highlight who they are and provide another opportunity to get a fresh start.”

Cameron Crossing students can be critical of their former schools, but Mason, a former vice-principal at Oilfields High School and Foothills Composite High School, said it is a team effort to help all students.

Some of the students are taking a “blended approach” as they take courses at Cameron Crossing but also courses which are not available, such as welding and cosmetology, at the Comp, Mason said.

Aidan Stanton also earned his diploma at Cameron Crossing this year. His education journey took an unexpected turn – and the trip may last longer than he expected.

“I plan to take a year off and then go to college and take a career with computers,” Stanton said. “I didn’t expect to even graduate. My marks are enough to get me passing.”

His mother Jodie Puhalski admitted seeing her son graduate was something she wasn’t sure she would see happen.

“I wanted it to happen of course really badly,” she said. “I truly believe that if he hadn’t gone to Cameron Crossing, he wouldn’t have graduated… I can see the confidence in him now that he is graduating.”

He credits the staff at the school.

“They went above and beyond for the students and it was just a good opportunity for me,” Stanton said.

Ashtin Laidlaw had more stops than a Calgary transit bus route in his education journey before finding Cameron Crossing.

“I feel relieved finally being done with school,” Laidlaw said. “Growing up, I was at 11 different schools. It kind of feels like I have been in school forever.”

He chose Cameron Crossing because it was a good fit.

He was able to choose a style of studying that fit his needs, particularly since he lives in the Cochrane area.

“I would drop in (to the school) and then I would take my courses online,” Laidlaw said.

He said he was impressed with the mental health counselling aspect at the school.

“My first year there, there was this counsellor, her name was Stephanie (Laborge). She helped me out a lot and how she helped me with everything – she provided me with good outlets to deal with my stuff.”

Hunter Simpson is glad to have the journey over – for now.

“I want to get it over and start working full time,” Simpson said. “Cameron Crossing was good for me. I was able to go at my own pace and get things done.

“When I was in Grade 10, I thought I might not graduate… Cameron Crossing helped me. I wasn’t doing very good at the other schools.”

He said because it is a small staff, he was able to have a personal relationship with all of the teachers and counsellors.

He might not be done just yet with school.

Simpson has plans to attend SAIT in the future to take an apprenticeship.

As for Mason, he’s not going anywhere soon. The small school fits him fine.

“It has been phenomenal,” Mason said. “The impact that we have not only on the students but the families…

“It is super-rewarding to see students who are graduating who might not have in a traditional
setting.”