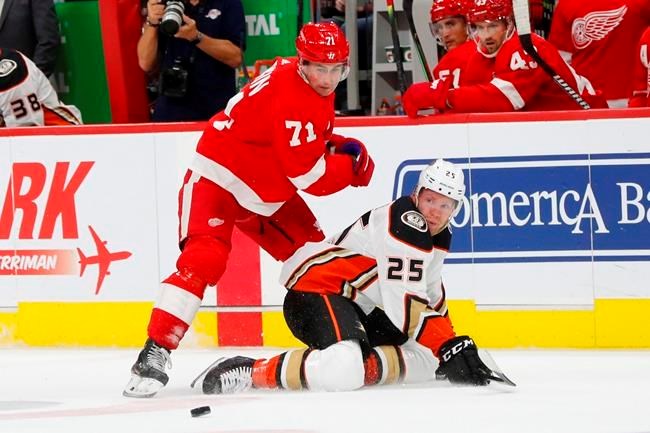 Dylan Larkin did a double-take the first time he saw the list.

Sure, the 23-year-old centre has led the Detroit Red Wings in scoring the last two seasons, is one of the fastest players in hockey and could captain his team one day.

But sneaking into the top-50 ranking of EA Sports' "NHL 20" video game?

That came as a surprise.

"Even though I know it's a video game, it's pretty cool."

"You always think your rating is probably too low," Buffalo Sabres captain Jack Eichel, ranked 44th with the same rating as Larkin, joked at the recent NHL/NHLPA media tour in Chicago. "The face and the hair was probably pretty good."

St. Louis Blues centre Ryan O'Reilly, 29th with an 89 rating, said he appreciated that designers made his beard look darker than it is in real life.

"I was dying," he said of his reaction after being shown his likeness. "That's the way I think it is. There were a lot of colours going on around here.

"I don't think they got it perfect."

"I'm good with it," Ovechkin said with a smile. "Obviously next year I'm going to try to be better."

But while the NHLers polled were all aware of their rankings, they didn't take to social media in droves to complain — unlike a number NFL players, who railed against the "Madden 20" video game when the numbers came out this summer.

"I don't pay as much attention to it as maybe I used to when I played the game when I was younger," said Anaheim Ducks goalie John Gibson, who's at No. 16 with a 90 rating. "I know there's some young guys on our team that asked me if I saw my rating."

"Every year you wonder how high you're going to go," added Florida Panthers winger Jonathan Huberdeau (88), who came in at No. 46. "It's cool how they do it."

Toronto Maple Leafs centre Auston Matthews — No. 15 with a ranking of 90 overall — is the posterboy for the game's North American edition.

"It was pretty generous," he said with a smile. "I didn't mind it.

"I think it helped to be on the cover a little bit."

Ovechkin said he plays video games during the season, but not the one featuring him.

Eyebrows were raised this summer when the Edmonton Oilers acquired James Neal from the Calgary Flames for Milan Lucic. Both wingers had underperformed, were weighed down by massive contracts with plenty of term, and needed a change of scenery. The Oilers, however, are the clear early winners. Neal led the league with six goals heading into Wednesday's action after scoring four times in Edmonton's 5-2 victory over the New York Islanders on Tuesday. The 32-year-old's six goals — one short of his total all of last season with Calgary — are the most in franchise history through three games. That's right, even Wayne Gretzky was never this prolific this early in a season.

Drew Doughty and Matthew Tkachuk don't like each other. The latest chapter in their feud was written Tuesday in Calgary when Doughty's Los Angeles Kings defeated Tkachuk's Flames 4-3 in overtime. The rivals went at each other as usual, and saw their names pepper the scoresheet. Tkachuk had two goals, including the tying effort late in regulation, to go along with an assist, while Doughty's three points included the winner in the extra period. The defenceman responded by taunting the crowd at the Scotiabank Saddledome and followed up with a Hulk Hogan-esque hand to his ear as he left the ice. Fans don't have to wait long for the rematch — the Flames visit the Kings on Oct. 19.

TOO EARLY TO PANIC IN SAN JOSE?

The San Jose Sharks made it to the Western Conference final last spring. It's early, but they look nothing like a contender in 2019-20. The Sharks have been outscored 17-5 in four consecutive losses to start the season, with No. 1 goalie Martin Jones putting up an .854 save percentage and 4.55 goals-against average after stopping just 70 of the 82 shots he's faced in three starts. But the crease isn't the only issue for a team that's struggled to create offensively. Evander Kane scored in his return from suspension Tuesday, while the Sharks announced they've signed veteran winger Patrick Marleau to a one-year deal. Marleau, 40, spent the first 19 seasons of his career with the Sharks before playing the last two in Toronto.

This report by The Canadian Press was first published Oct. 9, 2019.