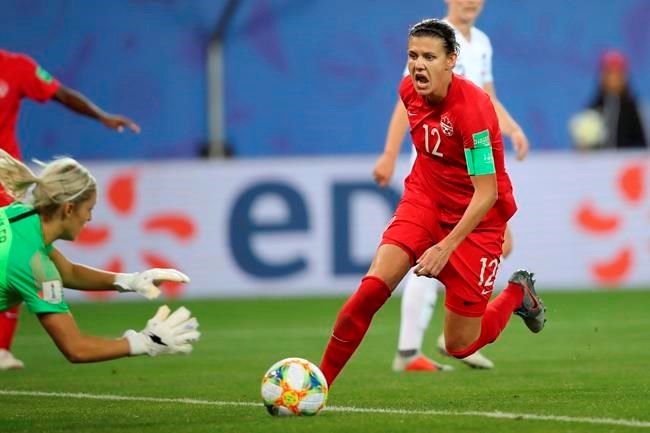 TORONTO — The sting of Canada's World Cup disappointment has been replaced by the allure of another Olympic women's soccer medal for Christine Sinclair.

Sinclair said Wednesday time has helped ease the pain of Canada's disheartening 1-0 World Cup quarterfinal loss to Sweden on June 24 in Paris. The veteran team captain's focus now is on leading the squad into the 2020 Tokyo Games and chasing a third straight Olympic medal.

Canada has captured bronze medals at the last two Summer Games (2012 in London, 2016 in Rio). Sinclair said she'll ponder her soccer future after the Tokyo Olympics.

"I've thought about it," said Sinclair, in town promoting A&W's 'Burgers to Beat MS Day,' campaign. "I'm just going to go the Olympics and see what happens from there.

"Obviously we hear what Canadians expect from us but we don't listen to it. It's about what we can achieve and what we know we're capable of achieving and if anything, we're good at bouncing back from World Cups."

Much was expected of Canada at the World Cup given its Olympic success and No. 5 world ranking. But Sweden went ahead 1-0 late in the opening half.

Canada had a glorious chance to tie the score at the 68-minute mark on a penalty kick that Sinclair deferred to Janine Beckie. But goalkeeper Hedvig Lindahl made the huge stop to not only preserve Sweden's victory but also spark debate regarding Sinclair's controversial move.

However Sinclair, who'd missed a penalty against Lindahl at the Algarve Cup months earlier, has no regrets about her  decision.

"There's a group of us that works on PKs after every practice and Hedvig had saved my last one," she said. "I'm proud of Janine for stepping up and taking it. Had we scored we wouldn't be talking about it.

"I'm more concerned that we didn't have a shot on goal. You can't rely on a penalty shot to win games in a World Cup and that needs to be the focus, I think."

Sinclair didn't have time to dwell upon the heart-breaking loss. Following the World Cup she rejoined Portland Thorns FC of the National Women's Soccer League.

"For me, it was very important just to get back at it," said Sinclair, who's two goals shy of tying American Abby Wambach’s all-time international record of 186. "You move on, especially for our team.

"We have the Olympics next summer, we have qualification in January. We can't dwell on the past too long."

Portland (9-3-6) is atop the league standings with 33 points entering action Wednesday. Sinclair has a team-high eight goals, leaving her tied for second overall.

The A&W promotion, in its 11th year and having raised over $13 million, is one that's near and dear to Sinclair's heart. Her mother, Sandi, was diagnosed 38 years ago with multiple sclerosis, which affects the central nervous system.

On Thursday, $2 from every Teen Burger sold will go to the MS Society of Canada.

"I've seen the toll it takes on a family and an individual," Sinclair said. "Now I'm just hoping to make a difference . . . I want to bring more awareness to the disease.

"It has one of the highest rates here in Canada and women are three times more likely to be diagnosed than men. I feel like not many people know much about the disease and how it affects people."

Despite Canada's World Cup result, Sinclair is adamant the national women's program is on solid footing and not in need of radical changes. The Canadian team is currently seventh in the world rankings.

"Knowing how the World Cup ended (with the Netherlands finishing second, Sweden taking third) we were right there," she said. "I honestly think we could've beaten both of those teams so I don't think this is the time to panic and all of a sudden change everything . . . just finetune a few things."

"They're the best team in the world for a reason . . . the depth they have is incredible," she said. "I have a teammate in Portland, Lindsey Horan, who I think is one of the world's best centre midfielders and she didn't even see the pitch in the final.

"And when you look at the teams they beat to win the World Cup . . . they deserved it. For us, it's kind of annoying that if you play them five times, you might lose four but it's making sure that one time is at the right time and that's what we're aiming for."

Sinclair feels a domestic league is needed in Canada to help solidify the sport's future here. But because one doesn't exist, Sinclair and her national teammates must play abroad.

"I think it's something that needs to happen," she said. "You look at some of the professional teams that are now funding women's teams — Manchester City, Manchester United — and it's scary to think what might happen in four to eight years if we don't keep up.

"I understand maybe not a pro league, maybe that's not possible right now, But at the very least what MLS is doing (with franchises in Toronto, Montreal and Vancouver) and get a handful of (Canadian) teams."