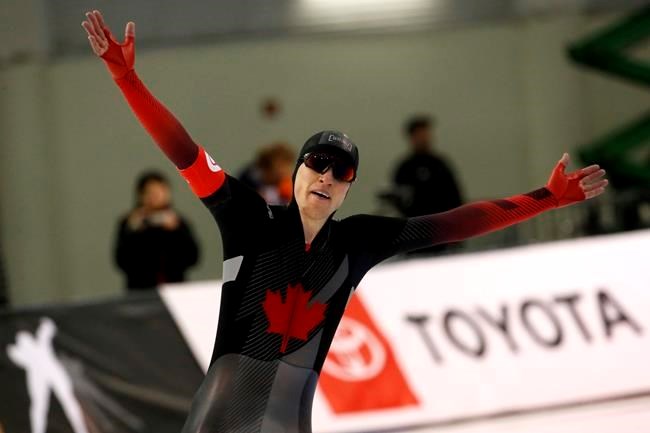 "I really wasn't focused on getting the world record," Fish said. "I just knew I needed to do this time or that time. I just kept going with the flow. Once I got comfortable, it kind of just went well for me."

It was the second medal in as many days for the 22-year-old Fish, who captured bronze Thursday in the 5,000 at the Utah Olympic Oval.

Both podium finishes are the first for him at a world championship event.

"This gold medal means a little bit more to me than the world record," Fish said. "It could have been done numerous times before I did it. We never really get to skate here for a 10K. It's awesome. I can't believe it."

Kimi Goetz was the top American finisher in the women's 500. Goetz took fifth with a personal-best time of 37.18 seconds. It was her first top-five finish after a pair of ninth-place finishes in World Cup races earlier this year.

"I have been visualizing this race all season," Goetz said. "I visualize my 500 all the time and it's always on the line at world championships. I did better today than I do in my visualization, so I can't really be upset with that."

Later, Ottawa's Ivanie Blondin and Isabelle Weidemann and Valerie Maltais of Saguenay, Que., won bronze for Canada in the women's team pursuit. Japan was first and the Netherlands was second.

The event runs through Sunday.

— With files from The Associated Press.

This report by The Canadian Press was first published Feb. 14, 2020.