World Juniors a ‘childhood dream coming to reality’ for Bernard-Docker 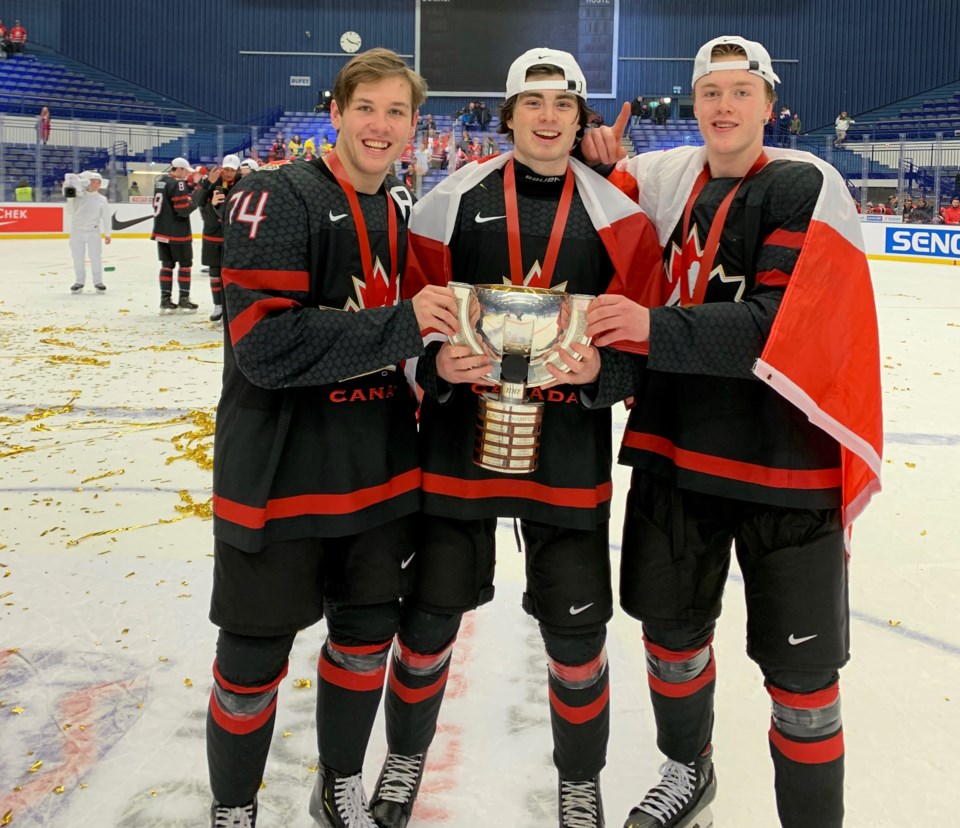 The World Juniors experience lived up to the hype and then some for JBD.

“It’s a childhood dream coming to reality. It’s everything I could have expected and way more,” Bernard-Docker told the Western Wheel. “It was just an honour to wear that maple leaf and I was super thankful to have that experience with all of those guys and the coaching staff.”

The smooth-skating North Dakota blueliner, and lone collegiate player on the roster, logged the most minutes of any Team Canada skater at the world championships, earning the trust of Dale Hunter and the coaching staff from day one.

“It was really cool, just a huge honour,” said Bernard-Docker, the Ottawa Senators, first-round pick in 2018. “Everyone on that team had a role to play and I think that’s the reason we were able to come out with the gold medal is guys were willing to buy into roles and willing to do whatever it took.

“It was definitely nice to be able to contribute a little bit.”

Bernard-Docker showcased his patented fake shot toe-drag from the point to score in Canada’s quarterfinal victory over Slovakia.

He also helped set up the biggest goal of the competition, throwing the puck up ice in what led to Akil Thomas’ now famous game-winning marker in the gold medal triumph over Russia.

“It was a tie game and I was just trying to move the puck and try not to complicate things,” said Bernard-Docker, who calls Canmore home. “The puck just got a little bit out of reach of Akil and he made a really nice play…

Team Canada earned plaudits across the globe for its character and work ethic throughout the competition.

In the final, Canada erased a 3-1 third period deficit with Connor McMichael, captain Barrett Hayton and Thomas finding the back of the net to shock the Russians – the presumptive gold medal favourites in the event — by a 4-3 score.

“I think it was just the mindset of sticking with it no matter what comes up,” Bernard-Docker said. “Throughout the whole tournament we had that same mindset that when we face adversity we play the best kind of way. We just had to stick to our game plan and execute to the best we can.

“No matter what we were down we still had belief in the group that we were going to comeback.”

Canada finished first in its group in the preliminary round with wins over the United States, Slovakia and Czech Republic along with a sound 6-0 defeat to Russia in the second game.

“It hit us a little harder than we though it would,” the defenceman said of the loss to Russia. “But I think overall it really helped us key on a few things that we needed to fix and learn more about our group and it obviously helped us in the final.

“You’re playing against some really good players and it’s a credit to our coaching staff, they had us playing a really good structure and coming together as a team helped a lot.”

The Fighting Hawks are in position to add silverware to their haul as the No. 2-ranked team in the NCAA with a 17-2-2 record.

“I’ll just try to take back as much as I can from playing with all those skilled guys,” he said. “We haven’t accomplished anything yet, we’ve got to keep doing what we’re doing every day and not get complacent about where we’re at and just keep getting better.”