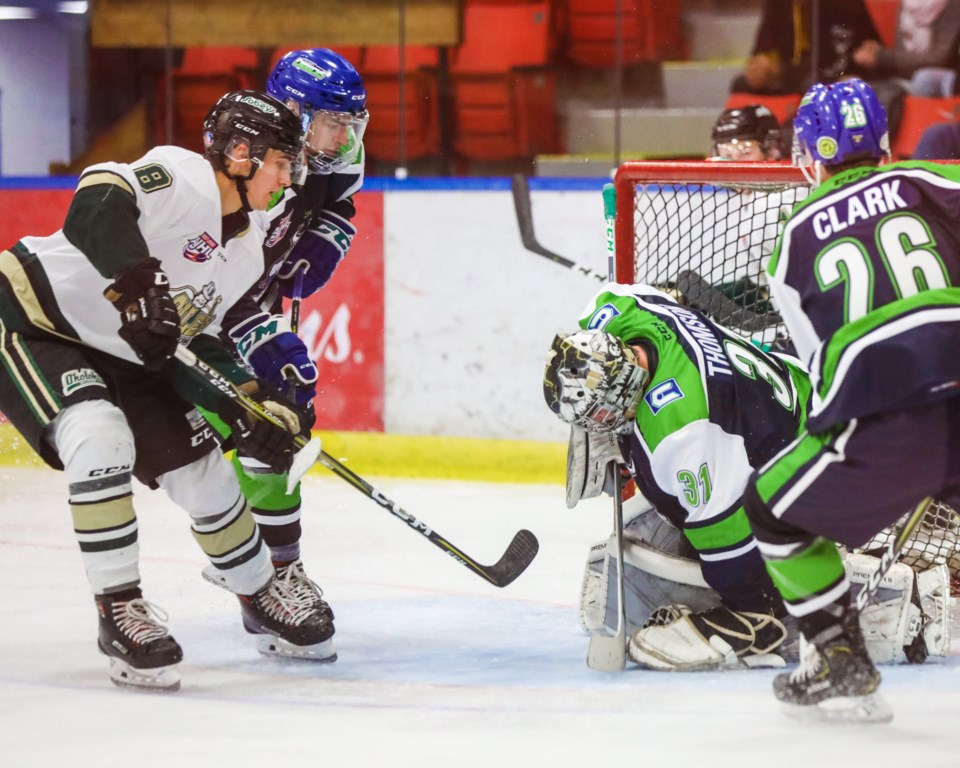 Brayden Morrison goes to the net for the Okotoks Oilers during a previous meeting with the Calgary Canucks. Okotoks beat Calgary 4-1 on Nov. 13 in the AJHL regular season opener at the Ken Bracko Arena. (BRENT CALVER/Western Wheel)

Okotoks' record setting scorer is picking up where he left off.

Jack Works scored a hat-trick to lift the Okotoks Oilers 4-1 past the Calgary Canucks Friday night at the Ken Bracko Arena as the Green and Gold opened the Alberta Junior Hockey League regular season in style.

"That was the most fun I've had in a long time. We played the way we should, there's always rust the first few games, but it's definitely good to be back," said Works, who established the Oilers' single season record with 43 goals and 92 points last season. "With everything that happened to get back to some sort of normal was pretty cool."

In an action-packed first period, Works opened the scoring on the man-advantage and after former Oiler Brett Moravec got the hosts on the board on a wicked wrist shot, the Yellowknife product gave the visitors the lead right back 19 seconds later.

"A lot of the time it's hard to get going off the start," said Works, a University of Denver commit. "So to start off that way, I couldn't be happier really right now."

Okotokian Jaevon Buschlen, one of seven Bow Mark Oilers alumni in the contest, rounded out the scoring, following up on a golden opportunity in-front from linemate Blake Jacques with 5:59 left in regulation.

Brady Parker made 24 saves on 25 shots to pick up the win.

"It's a really big help for us this year having returning guys and guys with experience in the league," Buschlen said. "Even with our rookies, they're starting to learn and catching on and that's just going to make us better off throughout the year."

This marks the second year in a row the Oilers have opened the season with a road victory over the Canucks, both by 4-1 scores.

All-time, the Oilers are 13-3 in season opening games in 16 seasons in the AJHL.

"A lot of guys were really excited to get back after it and start the season," Buschlen said. "Ending off last year before we could start our playoff round I think a lot of guys are eager to take it all maybe this year, that's what we're kind of looking forward to."

The action continues on Nov. 14 as the Oilers travel north to Olds to clash with the Grizzlys. The Oilers are back in Calgary on Nov. 16 to wrap up the three games in four days set.

The 2020-21 regular season will see Oilers play just 32 games, all of which are against South Division opposition.

The AJHL is not subject to the Alberta government's two-week ban on team sports which began on Nov. 13, a targeted measure to mitigate the spread of COVID-19 that has impacted virtually every other sports league in the province.

"Allowing us to keep playing and not take that two-week break is huge for us," Buschlen said. "Because we've been putting in the hard work since the end of August (without regular season games) and that's not something we were wanting to do.

"We're definitely really happy and feel really grateful that we do get to play the game we love."

Okotoks' home opener is set for Nov. 22, a 4:15 p.m. start at Pason Centennial Arena, versus the Camrose Kodiaks.

Due to facility restrictions of 100 spectators for indoor seated events in the province, the Oilers are not able to offer general admission tickets to home games at this time. The team's games are streamed live on HockeyTV.com.

For more information go to okotoksoilers.ca.